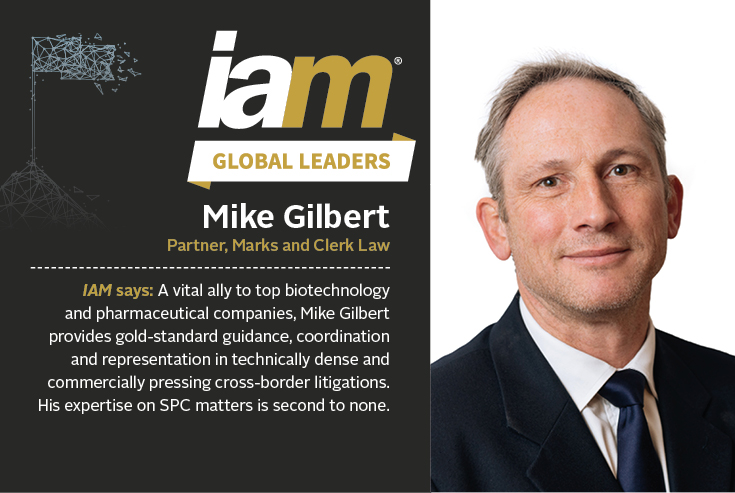 A drive instilled from an early age to stand up for people and their causes, along with years spent studying science at school and university were the building blocks that led me to this career. Then, following discussions with an inspired careers adviser at university, I was pointed in the direction of several specialist IP law firms to have some introductory interviews. Having met a number of leading patent practitioners at those firms, my mind was made up. Since those events in the late 1980s, I have not looked back. I was, and still am, fascinated by the combination of law and science and the challenges associated with developing creative arguments to drive clients’ cases forward.

What do you believe are the main qualities top-ranked patent lawyers possess?

I am sure this answer is subjective and clients are probably best placed to respond but, in my view, top-ranked patent lawyers must be able to:

Clients also look for their lawyers to be good communicators especially when dealing with complex issues – being able to speak confidently and yet being willing to listen to and answer what clients may think are relatively simple questions are necessary qualities. Finally, it is also essential to be well informed about the industry sectors in which we operate and be creative and confident in developing strategies and providing advice to our clients.

There have been a few cases that I am proud of. On behalf of our team, I am probably most proud of our work on cases where the inventors have won prestigious awards, such as the Nobel or Lasker prizes and we have succeeded in defeating multiple challenges to patents’ validity and achieving infringement findings and delivering the result for the client. It is a privilege to work on such cases when the underlying research is central not just to the dispute itself, but also to the benefit of patients. It is also immensely satisfying when a hard fought and complex commercial and technical dispute involving legal arguments concerning, for example, plausibility and obviousness to try, results in decisions that are cited for years after the event as being the defining authorities in that area of law: Regeneron/Bayer v Genentech ([2013] EWCA Civ 93) is one such case.

What are the biggest changes you have seen in UK patent litigation since your career began?

Over the past 28 years we have seen the Woolf reforms transforming civil litigation in the United Kingdom generally, but, in my view, the most significant change in patent litigation has been the degree to which the UK courts are willing to hear a broad range of cases, ranging from FRAND and SEP disputes, to Arrow-like declarations and declarations of non-infringement of foreign patents. It appears that judges in the United Kingdom are seeking to push the boundaries of their jurisdiction partly because UK decisions are generally highly regarded and well respected by judges and practitioners outside the United Kingdom, but also due to the expectation that our judges must be creative in their approach to resolving disputes. We live in an evolving world and our judges appear to harness that evolution to deliver ground-breaking decisions. Another example is the recent spate of Supreme Court decisions and, in particular, the decision in Actavis v Lilly. This decision formally introduced the concept of a doctrine of equivalents into UK patent jurisprudence. While currently that doctrine has not been applied in many cases, it is now a key factor in advising clients and developing litigation strategies – and particularly with regard to claim amendments which hitherto may not have been considered viable as the amendments may have missed the intended target. Finally, as Brexit looms, maintaining the status and importance of litigating complex patent disputes in the United Kingdom will become increasingly important given that the United Kingdom may find itself outside the European Union and outside any UPC system.

How are client demands changing and what does this mean for your practice?

Clients demand ever increasing responsiveness from their advisers, which is entirely understandable and appropriate. This demand is driven in part by the expectation that information, advice and certainty is required by management as quickly as possible. The demand for certainty, and certainty fast, has also affected patent litigation in the United Kingdom. Getting from the start of proceedings to trial in the United Kingdom in 12 months or less is now an integral part of the UK patent litigation system. Clients themselves are also facing tighter budgetary controls and being able to predict expenditure on cases is becoming an increasingly important part of our role. Further cases, which appear to involve ever increasing levels of technical sophistication and complexity needing more input for technically qualified lawyers, experts and external advisers do not come cheap. Thus, balancing client needs of urgency and budget controls with providing the quality and depth of service that is required can be a challenge. But putting change and demands to one side, there is also an undeniable constant and that is the need for clients to have a sound relationship with their trusted adviser.

The United Kingdom is considered a prime location for pharma patent litigation, what drives its reputation?

As I state above, UK judgments are well respected outside the United Kingdom. Further, UK patent judges generally have technical backgrounds and, if not, have worked on so many patent cases at the bar, that they have been surrounded by technology – particularly in the pharma sector. But the other factor that plays a key role is that the UK courts are used as a challenging forum to test out patent validity. The routine of commencing infringement proceedings in Germany, taking advantage of the bifurcated patent system and then counter punching in the United Kingdom to seek revocation of the equivalent UK designation is well rehearsed. This routine plays out in many biotech and pharma cases. It is also fair to say that the United Kingdom, and London in particular, boasts a wealth of experienced litigators, including both solicitors and barristers. Finally, subject to the costs involved, litigants wishing to have fully considered arguments on complex technical cases do want to litigate in the UK courts. The cross-examination system, a mainstay of UK court procedure, is admired by clients, judges and practitioners in many jurisdictions and assists judges to reach conclusions. So, the UK system, where the choice of experts is absolutely critical, is a powerful forum to litigate pharma disputes. It has been acknowledged as such for many years and its reputation will continue. With all that said, there is little doubt that many patentees see the UK system and approach as being difficult for patentees – and this is a situation that practitioners and perhaps judges alike must be aware of.

Are you concerned that Brexit may have an adverse impact on the United Kingdom’s standing as a venue for litigation?

You have done a large amount of work relating to multi-jurisdictional technical disputes –what does that entail?

The key to this is identifying and working with great and trusted lawyers who are team players in key jurisdictions across Europe. We often play a coordinating role, which often means:

Then we work with our clients to choose and work with lawyers in other European countries. One of the most important aspects of this coordination role is to establish strong working relationships with those lawyers and to respect and listen to all views and try to come to a consensus. It is critical to understand and be respectful and receptive to hearing how different arguments may play out in front of different courts and judges to the ones that we and our clients are most familiar with. It also requires an ability to share our technical knowledge with a broader team – working with lawyers in certain jurisdictions who may be excellent lawyers but who lack technical backgrounds. Having an ability to understand and being able to empathise with different cultures is a major advantage too – not to mention being able to communicate, at least to some degree, in foreign languages. Having grown up in Belgium, I do consider this to be a great advantage because I do not always see things through the eyes of an Englishman, or more accurately, Welshman.

What is the best piece of advice you have ever received?

Never take anything for granted.

If you were to make one prediction about how the patent environment in Europe will develop over the next few years, what would it be?

I would predict major frustration that after years of work and having been so close to establishing the UPC, those efforts will sadly all have been in vain. We will have to resign ourselves to resolving patent disputes in multiple courts in different European countries, subject of course to jurisdictional battles as mentioned above. We will thus still live with client frustrations of having effectively identical cases being decided differently in different European courts. I do hope I am wrong about this, but sadly, I think I will be proved right.

Mike Gilbert is the managing partner and head of the life sciences group at Marks & Clerk Law. His primary focus and expertise lies in life sciences patent litigation.

He has represented some of the world’s leading biopharmaceutical corporations in complex patent and technical disputes, including Genentech, Roche, AstraZeneca, MedImmune, Daiichi Sankyo, Pfizer, AbbVie and Amgen. He advises on supplementary protection certificate and paediatric extension matters, a field in which he is considered an expert.