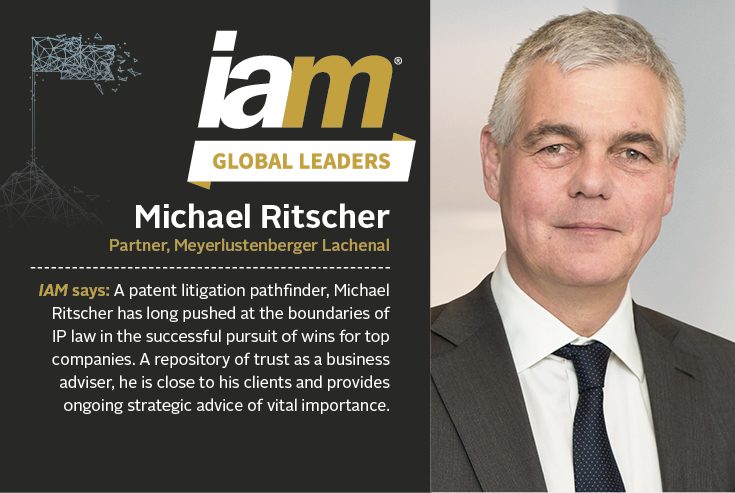 What are the main challenges you face in leading your firm’s IP practice?

I lead our team by example. Unfortunately, continuing to do the crucial parts of client work myself means that the purely administrative work is often neglected. As our IP team grows and gets more successful, it becomes more challenging to give all partners, associates and supporters of the team – not to mention the members of the other practices – the attention that they deserve.

How have client expectations changed over the years?

Responsiveness and time pressure are ever increasing, despite the general understanding that there must be limits. This is particularly difficult for younger colleagues who increasingly have priorities other than work. However, some clients respect the fact that lawyers also have private lives. Further, in-house counsel are increasingly specialised and do pick their external lawyers individually (ie, from different firms). Finally, we are seeing an increased demand from clients for secondments.

What are the main characteristics of the Swiss patent system of which foreign companies should be aware?

The Swiss patent system has become one of the top five leading venues for patent litigation in Europe because it:

Nearly all foreign clients that have litigated in Switzerland since the Federal Patent Court was introduced seven years ago are impressed by the quality of the system. Moreover, patent disputes – usually regarding licence agreements – are increasingly being settled through arbitration.

I am always proud when I swiftly achieve an injunction which leads to a settlement that is favourable for the client. For me, litigation is not a reason in itself, but rather a means to an end. The case that I am most proud of was a patent suit where I successfully represented a party in Liechtenstein. It was probably the only patent infringement suit to have ever been argued in Liechtenstein and both the Swiss and the Liechtenstein Supreme Court dismissed all claims brought against our client.

How do you expect the patent environment in Switzerland to develop over the coming years?

I am optimistic that patent litigation – and increasingly arbitration – in Switzerland will continue to be an attractive option for solving international conflicts. However, considering as the European patent system is increasingly becoming an EU patent system and Switzerland is not part of the European Union, it must come up with new ideas, such as an examination of Swiss patent applications on the merits (which has not been the case until now).

Michael Ritscher is recognised as one of the most experienced and esteemed IP litigators and arbitrators in Switzerland and beyond. He has extensive experience advising and representing clients from a broad variety of sectors. Mr Ritscher is often at the forefront of precedent-setting cases and companies regularly seek his support in their cross-border contentious affairs. Mr Ritscher appears as an opinion leader in his field in client and peer feedback ratings.