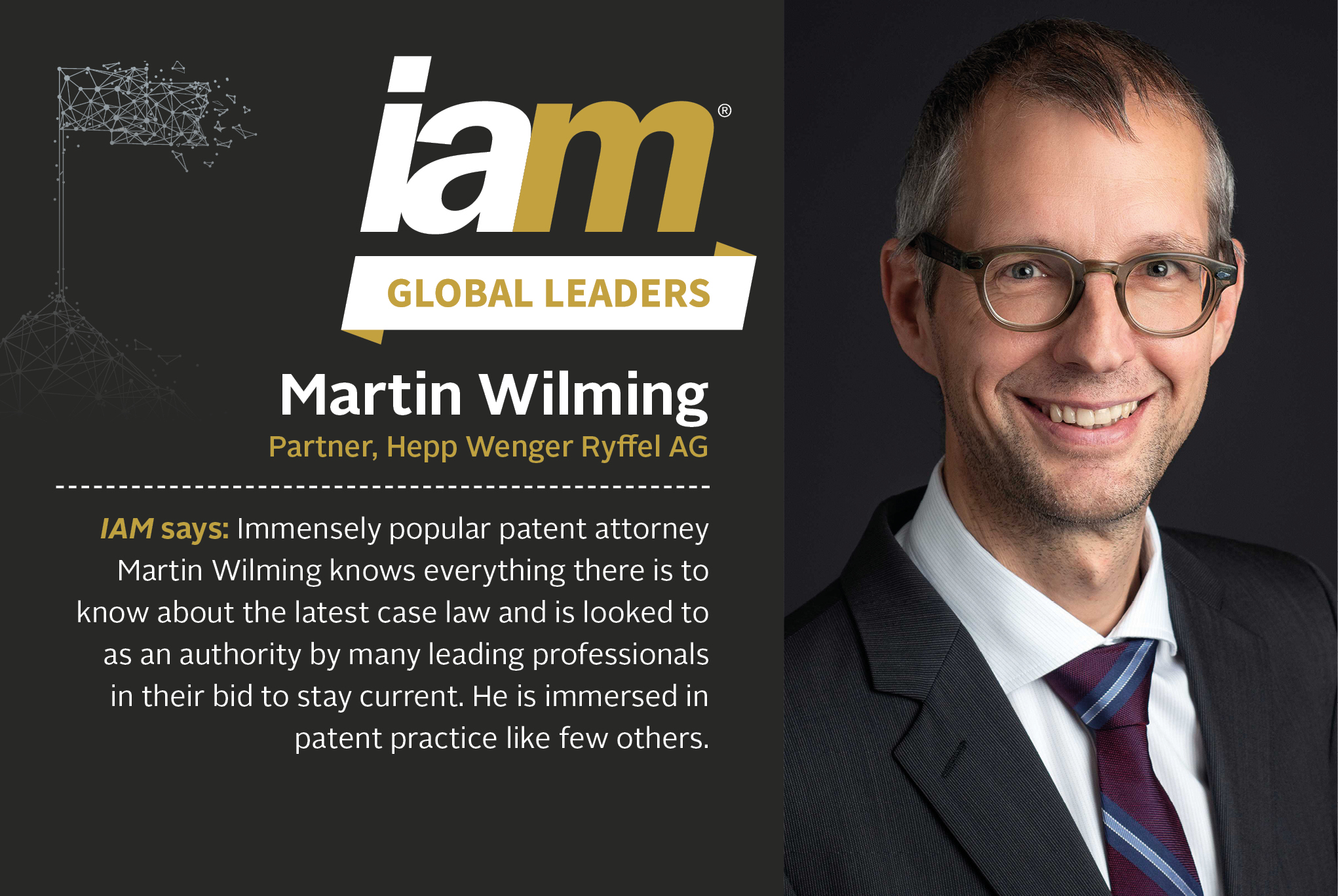 You cover an array of IP matters. What type of work do you enjoy most and why?

A comprehensive IP strategy makes use of the whole toolbox available (ie, soft and hard intellectual property). I like the interplay of all these assets – but my passion is clearly for patents. The best strategy begins with claim drafting, which is an art in itself. A negative search report or office action need not be a dead end, but rather a new beginning. There is always room for argument. The pinnacle is the contentious side of patents, whether in opposition/appeal proceedings at the EPO or in litigation before the courts. For me, there is nothing better than arguing a close-run case and doing your utmost to get your message across.

What are some of the biggest validity challenges that your clients currently face?

The big thing that has emerged in recent years is plausibility. It is a multi-faceted topic that is discussed, for example, with respect to validity of the priority claim, sufficiency of disclosure and obviousness. Plausibility is sometimes talked about as if it were a requirement for patentability on its own. But as case law at the EPO Boards of Appeal evolves, plausibility will be given the importance that it deserves.

Another issue is the formal entitlement to priority. The EPO Boards of Appeal are very strict (eg, when not all inventors have assigned their rights to the applicant). However, it appears that this approach is here to stay, despite some indication in national case law that suggests otherwise.

What has been the key to your success in handling matters at the EPO?

There is no magic to it – I had fantastic coaches who taught me the basics and showed me the way. In the long run, it is important to stay curious and to question things that might appear settled at first glance. Finally, you must never take a case lightly or underestimate the other party. There is arguably nothing more dangerous than a positive ad interim assessment from the opposition division or board of appeal in inter partes proceedings; never lull yourself into a false sense of certainty, as nothing is won yet. Your opponent will work like crazy to turn things around – as I would if I were in their shoes.

What are the biggest mistakes that foreign patent owners tend to make before the Swiss Federal Patent Court?

Proceedings at the Swiss Federal Patent Court are not overly special, at least on the merits. Patent law is harmonised in Europe to a large extent and the court closely follows EPO Boards of Appeal case law. But there are pitfalls. For instance, in contrast to the situation in Germany, an entity is liable as a contributory infringer only if the direct infringement to which it has contributed took place in Switzerland.

There are also some procedural aspects to consider, such as the fact that foreign plaintiffs may be ordered to provide a security when bringing suit to cover the counterparty’s compensation when the complaint is wholly or partially dismissed. Depending on the value of the dispute, this can be a significant amount of money – on top of the advance payment of the court fees, which must be disbursed by the plaintiff, too.

Further, there is little room for gamesmanship (eg, delay tactics or holding back the winning argument until the last moment). Proceedings at the Federal Patent Court are front-loaded. Likewise, it is worth mentioning the court’s strict approach as to what can be pleaded at the main hearing. You must not plead new assertions and the court always reminds representatives to avoid repetition. The main hearing is all about providing the court with a didactically astute summary of the key issues.

What emerging trends do you expect to see shaping patent enforcement practices in the future?

I do not believe that the UPC will become operative any time soon. Thus, no potentially disruptive changes are expected, although some trends must not be overlooked. For instance, it is argued more frequently than ever before that interim injunctive relief is not proportionate. Even in Germany, the automatic injunction approach is no longer a given. On the procedural side, there is a clear pressure for hearings to be conducted via videoconferencing. Further, cost-control in patent litigation is worth keeping an eye on, as patent enforcement should not be reserved for only the (very) big guys.

Martin Wilming has a PhD in bio-organic chemistry and is a Swiss and European patent attorney. He is mainly active in complex prosecution, opposition and appeal proceedings before the EPO and in litigation before the Swiss Federal Patent Court. He is an active member of the European Patent Practice Committee of the Institute of Professional Representatives before the EPO and contributes to the work of the EPO’s Standing Advisory Committee.