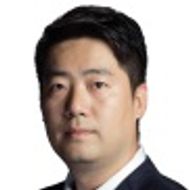 The Supreme People’s Court has chosen a 2019 judgment involving L’Oréal as one of its exemplary cases for 2020.

In March 2018 L’Oréal found that several online Taobao stores were selling counterfeit Kiehl’s cosmetics. Following this and based on information supplied by Alibaba, L’Oréal filed a request with the Shanghai Public Security Bureau (PSB) to conduct a comprehensive investigation.

After a thorough investigation conducted in nine cities from April to June 2018, the PSB identified a group that was manufacturing and selling counterfeit cosmetics, under the direction of Xu Zhenwei. He orchestrated the whole operation, hired formula developers, mould makers and printers for fake labels to facilitate the manufacture of counterfeit cosmetics, which were later shipped to distributors for sale.

On 3 July 2018 the Shanghai PSB together with PSB authorities in four other provinces launched a coordinated raid on 16 targets, which included two factories, two counterfeit trademark printing factories and two warehouses in Guangdong, and eight warehouses and dens in Shanghai, Zhejiang and Anhui. The action led to the apprehension of 13 suspects and the seizure of substantial amounts of counterfeit products, including 22,600 bottles of fake Kiehl's and LaboLabo cosmetics, around 360,000 fake labels, more than 10,000 fake bottles and some equipment, with a total case value of Rmb4.6 million.

The suspects were prosecuted and tried before the third Shanghai Intermediate Court [2019 Hu Xing Zhong No 106].

As the mastermind of the syndicate, Xu was affirmed as the principal culprit for manufacturing the counterfeits and his sentence was proportionate to the total case value – four-and-a-half years’ imprisonment and a fine of Rmb2.2 million.

While some of the other suspects were not directly engaged in manufacturing the counterfeits, they shared a common intent with Xu to commit the crime and supplied assistance. They were therefore deemed as joint offenders. Huang Jiecheng developed the formula and supplied raw material. As these were essential to the manufacture of the counterfeits, the court found that he had played an important and dominant role in the syndicate and was deemed as a principal as well – consequently he was sentenced to three years’ imprisonment and a Rmb330,000 fine.

Xu’s other employees were affirmed as accessories but given that they did not receive any direct profit from the crimes (they were given a salary only), their roles were deemed to be relatively minor and they were granted some leniency. 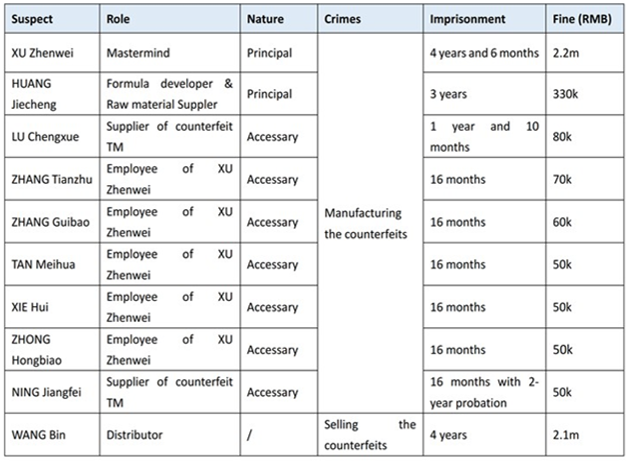 Xu Zhenwei and Lu Chengxue later appealed to Shanghai High Court, which dismissed the appeal and maintained the first-instance judgment.

The main challenges that brand owners face in combating counterfeiting groups is knowing how to uproot the whole network and make sure that the case deters other counterfeiters. In the investigation stage, it is therefore crucial to make use of the Big Data attached to an online marketplace as leverage to convince the PSB to launch a comprehensive investigation.

Further, the head of the counterfeit network is usually hidden backstage. For example, Xu Zhenwei did not operate an online or brick-and-mortar store by himself and only rent another factory’s workshop to manufacture counterfeit products. Further, he sold the counterfeits to familiar distributors only. Entities must therefore rely on the PSB’s ability to conduct advanced investigations.

Brand owners must supply sufficient prima facie evidence to the PSB to justify an in-depth investigation on a valuable target. Further, using Big Data to map out a possible network and verify the sale of counterfeits by test purchase can serve as good leverage to convince the PSB to look into the case.

In the prosecution stage, brand owners should entrust an attorney to join the proceedings, assist the court in ascertaining the facts and thereby push for a strong punishment. Further, they can request the case dossier, which includes the PSB’s investigation results. Knowing the sales record and property sightings will not only facilitate the assessment of case value in the criminal prosecution, but also help to secure a favourable decision in a civil litigation. Finally, it is important to note that successful raid actions and large seizures do not necessarily guarantee a rigorous sentence against the infringers as numerous elements may affect the final sentence.