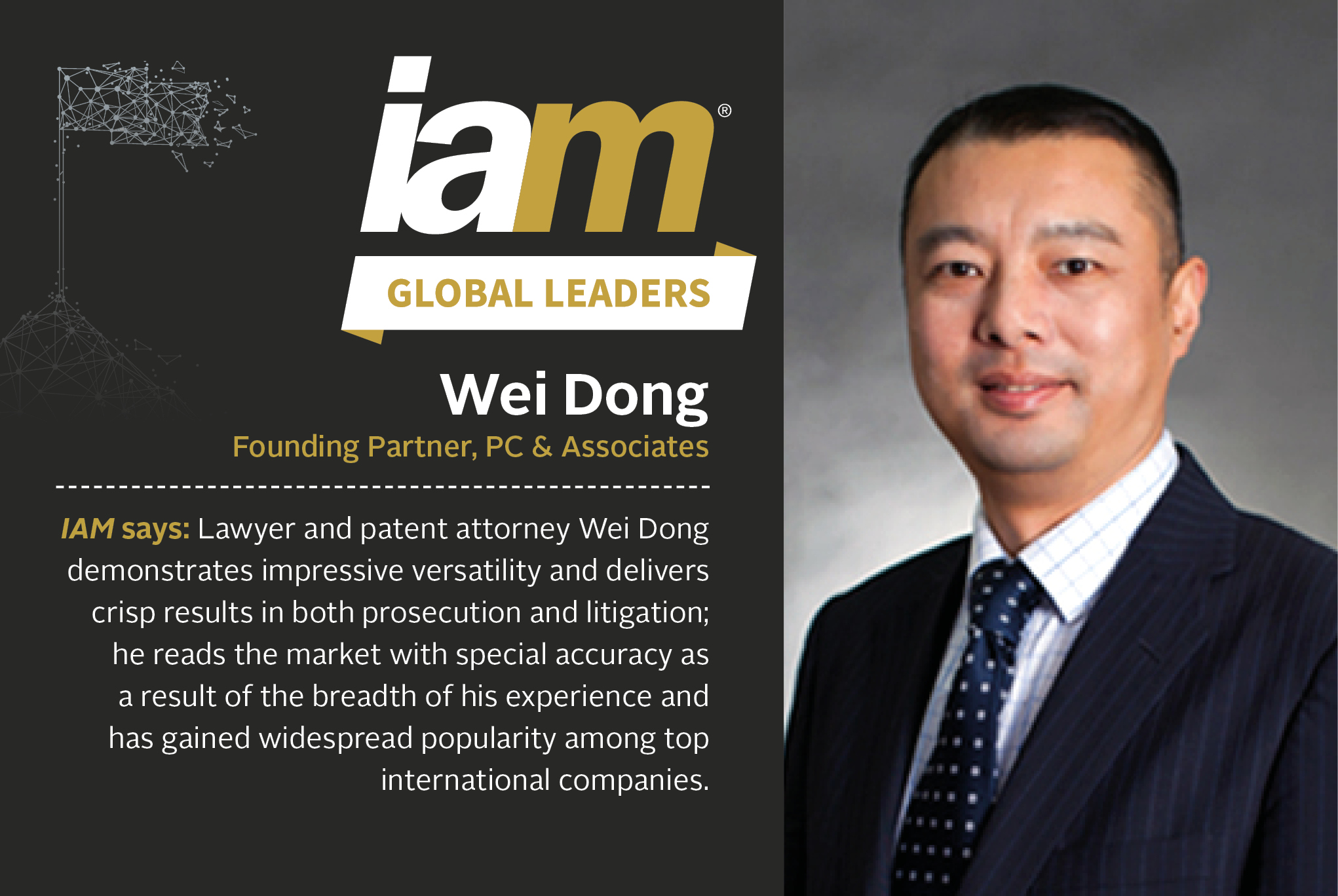 You have been recognised as an outstanding patent attorney by numerous organisations. What has been the secret to your success?

Becoming a better lawyer requires a range of qualities, for example, enjoying discussions with good arguments, being willing to fight to the end and devoting yourself to continuous learning. One quality that I would emphasise is being able to see the bigger picture, which is key to seizing opportunities in this highly competitive industry.

What are the key factors to consider when leading a top-class full-service IP team?

To foster a high-performance team, you must value the individual, develop team trust, communicate openly and share successes. It is important for the leader to create an atmosphere that enables members to share new or potentially unpopular ideas, trust one another and focus on solutions rather than problems. As a full-service IP team, PC & Associates’ signature is its dynamic interaction between the litigation and prosecution teams, which ensures that the fresh experiences obtained during litigation are swiftly transformed into patent drafting strategy, thereby enhancing the validity and enforceability of the patents drafted.

What are the biggest enforcement challenges facing patent owners in China at present?

Besides long-term existing challenges (eg, patent owners carrying too much burden of proof, slow examinations and unsatisfying damages awards), a new challenge has emerged in regard to maintaining the validity of the patent in suit. Here, the infringer tends to repeatedly initiate nullity actions against the patent until it succeeds. The patent owner must invest tremendous time and energy to fight for the validity of the patent, but the costs of nullity proceedings are not considered to be reasonable in the corresponding infringement case and therefore cannot be reimbursed. Further, the outcome of the nullity action can be unpredictable given the Patent Reexamination Board’s practice with regard to assessing inventive step.

You have been involved in a number of landmark patent lawsuits. Which of these cases have been the most memorable
and why?

I take it as a great honour to be able to contribute to new concepts and principles of law and consequently change the landscape of judicial practice in patent litigation.

One of my representative cases was the Shimano v Sunrun retrial (2012 MTZ no 1), an invention patent infringement case in which the concept of the ‘feature of usage condition’ first appeared. The claim related to a bracket coupled with a bicycle frame, and the accused product was merely a bracket, which was sold in the market as a component without the bicycle frame. Shimano lost in both the first and second instance because the accused product failed to meet the ‘all elements’ principle due to the missing feature of the bicycle frame. I represented Shimano in the retrial before the Supreme Court, which overturned the original judgments and laid the cornerstone for an entirely new concept in judicial practice – the ‘feature of usage condition’. This refers to the technical feature used to describe the background or condition in which the invention is utilised and therefore solved the problem of the ‘missing feature’ in the accused product. The concept was formally written into the judicial interpretation and has since been widely applied in practice.

What future reforms – if any – would you like to see made to the Chinese patent system?

Given that the court hearing for a patent infringement case usually lasts only four to six hours – even less for administrative cases – it is difficult for parties to argue sufficiently and challenges the judge’s understanding of the disputed points, especially when there is a complicated case at stake. The trial to some extent becomes a mere formality and the judge relies a great deal on the written opinions of the parties – the importance of which I do not deny – to make a decision. A judgment made in this way is likely to lack reasoning and be unpersuasive. I would like to see more hearing time assigned to reflect the value of the trial.

Another change that I would like to see is for the costs of patent owners in nullity proceedings to be considered reasonable for stopping infringement in the corresponding patent infringement case, so as to provide a fairer system for patent owners.

Dong Wei specialises in patent enforcement and transactions, especially in the high-tech field, where he handles semiconductor, computer science and biotechnology-related cases, as well as SEP and NPE matters. He is one of the most experienced and well-known patent litigators in China and has been deeply involved in milestone patent lawsuits, which have established important new principles. In 2004 Mr Dong successfully helped a Japanese client obtaining the first preliminary injunction against a patent infringement defendant.