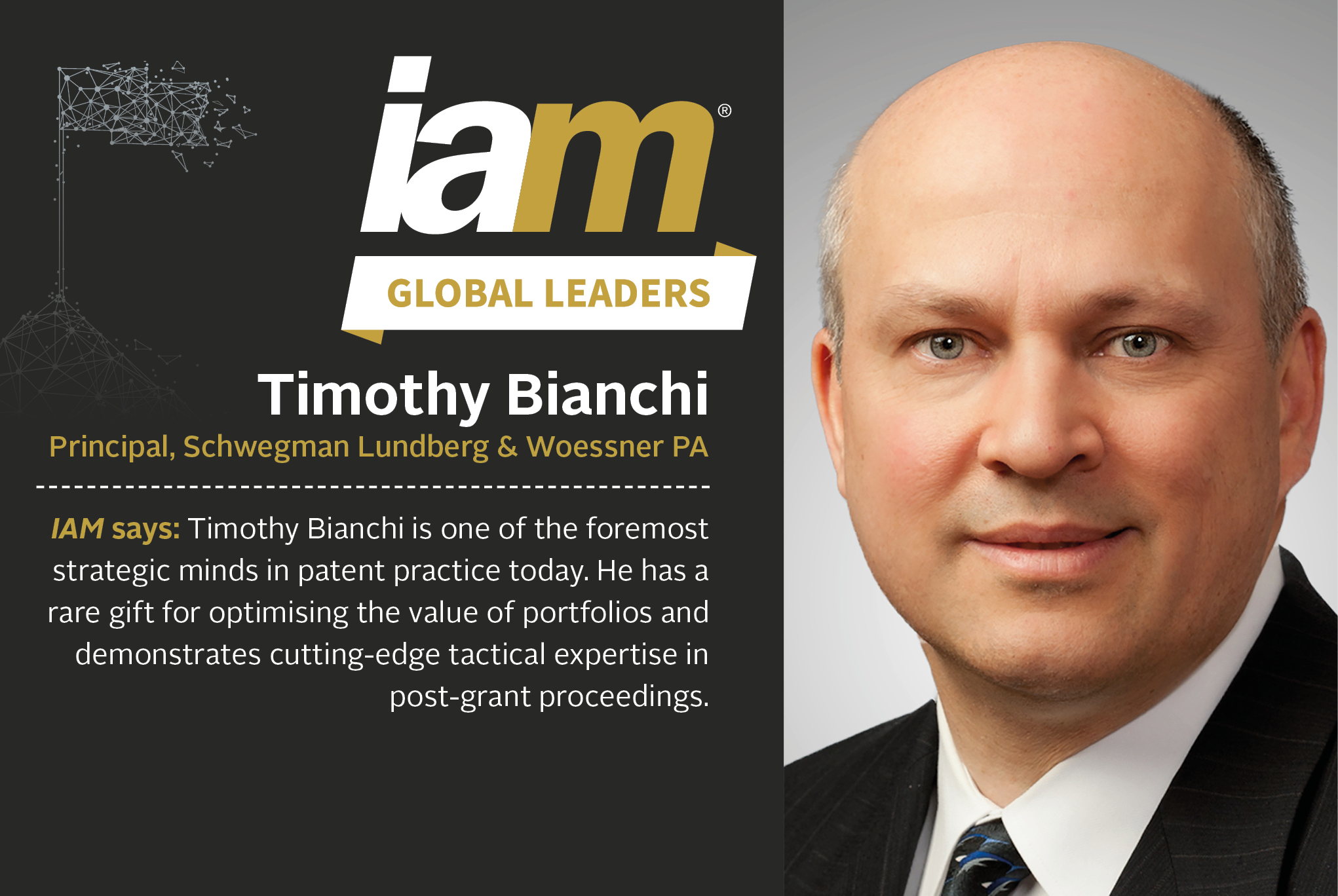 Which aspect of your work do you enjoy most and why?

One of the most rewarding aspects of my work is when I can combine technology, law and business experience to create an effective and practical IP solution for a client. I thrive on solving tough IP problems that require unconventional approaches and I like reducing the waste that results from patterned approaches to obtaining, maintaining and asserting IP rights. The legal business is in need of an overhaul and fresh, new minds and ideas cannot be applied fast enough.

What long-lasting effects have Oil States and SAS Institute had on your practice?

Before SAS Institute, the PTAB used a ‘partial institution’ practice to focus on a petition’s grounds that presented a compelling case of potential invalidity and to discard the weaker grounds and claims that were insufficiently challenged. The rules for PTAB practice were drafted with the partial institution concept in mind. Parties could thereafter focus on the compelling grounds and claims at issue guided by the institution decision and could devote little or no effort to the weak grounds.

SAS Institute arose in part from concerns over the confusion about estoppel resulting from partial institution. If a petition presented four grounds, but was instituted on only one, would estoppel apply to the three remaining grounds? The Supreme Court’s solution was to allow the board discretion as to whether it would institute a case for trial, but if it did take up the case, then it required the board to institute the petition as it stood, creating an all-or-nothing approach to institution. If the board decided to institute a case, every ground would necessarily be addressed, with estoppel applied to all grounds and all challenged claims on a final written decision from the board.

Understandably, the board struggled with the SAS Institute mandate. What if three of the four grounds of a petition are compelling, but the last one is not? What if only one of the grounds is compelling and the remaining three are weak? Should the board use its resources on such cases or should it decline to institute trial on weaker petitions? How should the board write its institution decision given the inevitable likelihood that some of the grounds are weaker than others?

The net effect is that grounds are no longer eliminated by partial institution. Parties have to decide how to address each ground and each claim during the proceeding. Accordingly, post-SAS Institute, the record frequently includes arguments and evidence for each ground – whether it is weak or strong. The developed record gets progressively larger, yet the briefs are required to be progressively smaller.

SAS Institute has constrained some of the PTAB’s institution latitude and continues to test its resources for instituted cases. Now, if it takes up a case, the board must weigh the evidence for all the challenges. The USPTO has recently announced increased filing fees for all post-grant challenges to reflect this additional workload.

Petitioners must carefully evaluate the proffered grounds so as not to dilute the stronger arguments with weaker ones. The challenged claims must also be considered as the board’s workload in a resulting instituted case must comprehend all grounds and their challenge claims. Patent owners have more work to do to defend their patents, because rather than address partially instituted grounds and claims, they must address every ground and every challenged claim. The impact of SAS Institute continues to accumulate over time.

USPTO Director Andrei Iancu has introduced many changes to PTAB practice. To what extent would you agree that it is a “new day at the PTAB” and which of those changes have been most impactful?

With regard to practice, the PTAB has endeavoured to interact more with – and provide guidance for – practitioners through a series of presentations. Among the topics covered, the board has provided guidance on the procedure for claim amendments in an instituted trial. The process is necessarily complicated, but it affords the patent owner an opportunity for claim amendments with input from both the patent owner and the petitioner. In one optional mode of amendment, the parties are given preliminary guidance from the board as to any issues with amendment to give the parties more visibility as to how the board perceives the amendments proposed by the patent owner with input from the petitioner. This procedure was provided to address previous criticisms about the availability and viability of claim amendments made in post-grant proceedings before the PTAB.

Are there any other changes that you would like to see made to PTAB practice further down the line?

I would like the PTAB to check that petitioners have clearly stated challenges and have established sufficient evidence in the record before a patent owner is compelled to file its preliminary response. If a petition contains ambiguities or evidentiary gaps, the challenges should be clearly articulated before the preliminary response is required in order to have a more comprehensive response to the petition. The board is rightly sensitive to the costs and complications involved in filing a solid petition. However, ambiguous challenges result in an even larger and unnecessarily cumbersome record and may delay important arguments to post-institution, wasting more of the PTAB’s resources and contrary to the guidance of cases such as SAS Institute. Ambiguous challenges also make more work for the PTAB as it must sift through the parties’ alternate interpretations of the grounds.

Given the high cost of defending patent rights at the PTAB, it seems as if the process should either dismiss or at least refine challenges where the petition is ambiguous or incomplete before a preliminary response is required of a patent owner.

What are the most common errors that parties make before the PTAB?

Procedural errors still abound and the way that the PTAB is enforcing violations of the rules has become slightly more rigid. Less latitude is provided to filers that miss deadlines or file documents without the board’s permission. Practitioners seem to be making fewer substantive errors before the PTAB than in the first years of practice. However, the board has become more selective of petitions in cases with serial petition filings and cases where the timing and nature of petitions would duplicate efforts made in parallel ongoing district court proceedings.

What are the biggest enforcement challenges facing your clients at present?

Any patent owner that asserts a patent may face a validity challenge at the PTAB. Post-grant reviews affect the cost and timing of litigation matters and have become a first line of attack on patent validity in many cases. Patent owners need to carefully consider the costs and timing of such challenges when calculating each assertion.

Critics of post-grant reviews maintain that they are biased against the patent owner and that they erode patent rights. Every patent stakeholder should be concerned about the fairness of the system, because even if a particular stakeholder is benefitting from these challenges today, there will eventually be a day when it wants to assert its portfolio and may find that the system is unable to afford it the protections that it enjoyed in the past.

Institution rates have moderated substantially since the inception of the America Invents Act. However, the high cost of litigating these post-grant proceedings is a disadvantage for many SMEs . Left unchecked, this can stunt the innovation of SMEs, creating a void in US technological development, which should be a concern for all patent stakeholders.

What are the top three considerations for US patent owners engaging in inter partes review proceedings?

First, know the quality of the prosecution team that is preparing and procuring your patents. More patent battles are lost on the prosecution front and avoidance of post-grant reviews by solid prosecution practices are almost never recognised. Remember, you may have to defend any patent that you issue in post-grant proceedings. A thorough understanding of estoppel and the scope of patent claims is necessary to provide a robust patent.

Second, build in more backstops to patentability. No one can know all of the prior art in a particular patent area. More prior art will be discovered in post-grant proceedings and in litigation than any examiner will likely uncover during prosecution. Have backup patentability positions built into the specifications and claims during patent procurement. Keep a sharp eye out for how amendment practice morphs in the coming year. There are several amendment strategies that can be employed if the proposed practice proves successful. Sometimes you must lose a battle to win a war.

Third, continue to look for creative strategies to avoid institution. There is no one-size-fits-all in post-grant practice, but there are advantages to a strong preliminary response that can save the high costs of defending a patent in a full PTAB trial. Early analysis of a case cannot be emphasised enough. Patent owners frequently think that a case will involve certain prior art or claim construction arguments, but later learn that there are more weak points in the petition. It is better to discover and understand these weak points up front in order to make a more compelling preliminary response and avoid institution of trial.

In which areas are you seeing the greatest increase in patent activity and what is driving this?

Processing, sensoring and communications continue to be developed and patented. However, there is a big emphasis on making products smarter and that is increasing the patenting of AI and machine learning inventions for products that already exist. Robotics, electric vehicles and energy storage are also of particular interest. There is also a substantial amount of patent activity directed towards addressing the covid-19 pandemic.

How do you stay up to date on the latest legal developments?

One must read more and more to stay current. It is essential to have a good number of subscriptions to periodicals and case analysis sources. Even the courts are publishing recorded and live-streamed oral arguments and their decisions. The volume of information produced every month can be mind-boggling and it is important to stay abreast of as many cases and decisions as possible.

What can the United States learn from other key jurisdictions to create a more globally competitive patent system?

It is time for the United States to be brutally honest about the way that it is procuring, testing and enforcing patents. In the past, the US patent system was unique and operated with rules that differed greatly from other jurisdictions’ patent systems. Attempts to harmonise the US system with these other patent systems are not working to the United States’ advantage, based at least in part on glaring differences in the ways that we practise law in the United States versus other countries. We need to question whether harmonisation is possible without first changing the way that US cases are litigated. The entire US legal system has been challenged by the recent pandemic. It is up to the United States to learn what is really essential and to take every possible effort to reduce the high costs of litigation, which in turn drive investment in patents and post-grant proceedings.

Timothy Bianchi is a principal of Schwegman Lundberg & Woessner. He is active in patent procurement, post grant patent challenges, opinions, due diligence, acquisitions and patent assertion strategy. Representing parties in inter partes and post-grant reviews, Mr Bianchi’s background is in medical devices, signal processing, communication electronics and computer hardware and software. He also has electrical engineering and research experience from his previous employment with IBM, Honeywell and the University of Minnesota.