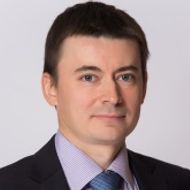 An analysis of Russian Patent and Trademark Office (PTO) administrative cases in 2015 revealed five remarkable cases that affected Russian trademark enforcement practice. These decisions are of interest not only to IP specialists such as trademark attorneys and lawyers, but also to trademark owners.

VENICE: special graphics used in spelling of geographic objects opens up real opportunities for registration
One of the grounds for the refusal of legal protection to International Trademark Registration 1133633 (shown below) in Russia for goods in Classes 18 and 25 was the fact that the applied designation represented a word which was translated from English into Russian as 'Venice', the name of a city in northern Italy, and thus a geographical name. On that basis it was decided that the word 'Venice' was perceived as the location of a manufacturer, where goods were produced. Therefore, it could not be granted separate legal protection.

On appeal this ground for refusal was overruled because the collegium of the Chamber for Patent Disputes found the special graphic spelling of the word sufficiently original and memorable to be granted legal protection in Russia as the mark VENICE.

This decision is interesting as it is a rare example of legal protection being granted to a trademark that is a geographical name (a toponym). It is also an example of special graphics, which complicated the interpretation of the word. Thus, the graphic used in the spelling of the third letter provided for a variation in interpretation which meant that the mark was not linked to 'Venice' as a geographical name (Russian PTO decision of April 2015 on International Trademark 1133633).

Legal protection for the trademarks was found to be invalid on the grounds that the designation "Black Russian" (in Russian, "Черный русский") had become commonly used for goods in Class 33, "cocktails of a certain composition (this designation was known as "a name of a certain cocktail, having certain recipe with some slight variations" for a long time, long before the priority date of the opposed trademark). For all other goods in Classes 32 and 33, the use of this name could lead to confusion among consumers with regard to the goods, their features and characteristics. Further, the name was unable to fulfil the trademark function (ie, to individualise the goods of cocktail producers) because this designation represented a name of a cocktail with a particular recipe. Therefore, other cocktails with different recipes and different features (eg, 'Mojito', 'Bloody Mary' and 'Pina Colada') cannot be named "Black Russian" or "Черный русский".

The Russian PTO decision also stated that granting an exclusive right for the designation “Black Russian” to one party would put this person in a better position compared to other cocktail producers, which could not be allowed. Rather, the name should remain free for all market players selling such products.

The case is remarkable due to the fact that the registrations of these trademarks were found invalid only after the opposition party corrected the grounds for objecting to the registrations and provided proof based on its own practice from earlier oppositions (when appealing a Russian PTO decision of April 6 2014 to the Court for IP Rights (Decisions СИП-546/2014, СИП-547/2014 and СИП-548/2014)).

Therefore, when filing the new opposition, the applicant not only indicated that the names were not distinctive, but also provided proof that they were commonly used for a certain type of goods. This combination of grounds resulted in cancellation of the registration of the marks with regard to alcoholic cocktails and reinforced the argument that the marks could confuse consumers regarding the type of goods compared to other goods in Class 33 and all goods in Class 32, in order to cancel registrations of the marks for all alcoholic and non-alcoholic beverages (Russian PTO decision of December 29 2015 on Applications 2001735000 (Registration 281919), 2008703293 (Registration 381529) and 2011709709 (Registration 489292)).

ФИДЕРРАЦИЯ (Fiderration): breaking orthographic rules makes mark scandalous
The Russian PTO confirmed an expert opinion, according to which registration of the name shown below (translated as 'Fiderration') as a trademark contradicted public interests because it was a misspelling of the word 'federation', spelled in violation of Russian langauge orthographic rules.

The applicant appealed the Russian PTO decision. The Court for IP Rights not only agreed with the Russian PTO, but added that the spelling was perceived as a deliberate misspelling of the well-known word 'Federation', part of the official name of the Russian Federation, which meant that the designation contradicted the public interest.

Cases in which the Chamber for Patent Disputes has refused registration of a trademark due to violation of Russian language orthographic rules are rare. However, on  August 31 2015 a new provision was added to Russian legislation prohibiting the registration of both Russian words with orthographic mistakes and words spelled in violation of any orthographic rule – meaning that words spelled incorrectly in any language should be deemed to violate the public interest (Russian PTO decision of January 12 2015 on Application 2012722710 and Court for IP Rights decision of June 9 2015 on Case 74/2015).

SIGARE: fake letter of consent
French company Parfums Parour, owner of the trademark CIGAR (International Registration 635691, registered on May 3 1995), filed an opposition to mark SIGARE (Registration 463132, priority date of November 22  2010, registered on May 31 2012) on the grounds that protection to the opposed mark had been granted in violation of the legislative ban on the registration of similar trademarks, to the extent of causing confusion with trademarks owned by other parties in respect of similar goods with earlier priority dates.

The Russian PTO based its conclusion regarding the similarity of the SIGARE and CIGAR marks on the following factors:

During the Russian PTO suit the party which had filed the opposition was surprised to discover in the application files for the SIGARE mark a letter, purportedly written by the opposing party, consenting to registration of the opponent’s mark.

Thus, it was clear why the Russian PTO registered the SIGARE mark despite the obvious similarity with the prior trademark. Further, in order to succeed in its opposition the owner of the internationally registered CIGAR mark had to prove that:

In light of this case, rights holders – in particular, those which own transnational or internationally well-known marks – should regularly monitor both their protected trademarks and those that have been applied for in Russia, and should note that an untrustworthy person might provide a fake letter of consent to the Russian PTO, which is not obliged to check authenticity (Russian PTO decision of November 12 2015 on Application 2010737560 (Registration 463132)).

РИС И РЫБА (RICE and FISH) versus РЫБА.РИС (RICE.FISH): change in order of words does not affect meaning
Legal protection of the combined trademark, including word elements РЫБА.РИС ('Fish. Rice') and JAPANESE CUISINE (Registration 518780, priority date of April 23, hereafter 'TM') was successfully opposed on the principle of the seniority of rights with regard to parts of the services covered by Classes 35, 39 and 43.

The applicant based his opposition on the commercial designation which he used for branding his restaurant, which included word and mark РИС И РЫБА ('Rice and Fish') (Registration 494983, priority date of August 3 2012, hereafter 'TM-1'), registered for services in Class 43 (snack bars; cafes; cafeterias; restaurants; self-service restaurants; canteens; bar services; and catering services).

The documents provided in support of the invalidation action proved that the applicant's restaurant РИС И РЫБА was launched in Moscow in 2001, long before the priority date of the challenged mark. In addition, the opposition provided an analytical report based on research carried out among Moscow consumers on the perception of the marks РИС И РЫБА ('Rice and Fish') and РЫБА.РИС ('Fish. Rice') used for restaurant services. According to the report, the commercial designation had a high degree of recognition and was well known among Moscow consumers (56.2%).

Despite the fact that the word combination РИС И РЫБА (Rice and Fish) included an indication of goods belonging to Classes 29 and 30, it possessed sufficient distinctiveness for the individualisation of food services as it did not explicitly mention the type of activity by including the words 'restaurant', 'café' or 'canteen', but rather created an idea of a certain menu type through a range of associations.

Therefore, taking into account the distinctiveness of the mark РИС И РЫБА (Rice and Fish), used for the individualisation of a restaurant, as well as the long-term use of the name in a certain area, it was concluded that this name had all the necessary criteria for a commercial designation.

While comparing this commercial designation and TM-1 with the contested TM, it was determined that they included similar words – 'rice' and 'fish' – and their different order in the compared marks did not significantly affect the phonetic and semantic perception of the compared designations as a whole. Other elements of the contested TM were of minor importance for the mark's individualisation function, as they were solely descriptive: the word combination JAPANESE CUISINE referred to the type of provided services (the non-protectable element) and the stylised figure of a fish, swallowing the letter R, underlined the semantics of the word elements 'Fish. Rice'.

As the contested TM, the cited commercial designation and TM-1 have a high degree of similarity, it was concluded that consumers could potentially think that the services of Class 43 (providing food and drinks), the contested trademark and the applicant's restaurant under the known commercial designation belonged to the same person. All of these services belong to the same group of providing food and are rendered in the same economic sector – public food service.

On this ground, it was concluded that TM, TM-1 and the applicant's commercial designation for similar services in Class 43 were confusingly similar, meaning that the contested TM violated Paragraphs 6(2) and 8 of Article 1483 of the Civil Code of the Russian Federation.

According to the facts, the owner of the contested TM owned the restaurant Fish. Rice, which provided an online food order service through its website http://riba-ris.ru ('riba-ris' is a transliteration of the Russian words 'fish' and 'rice'), which correlated to the services of the mark connected to the delivery of goods ordered online (Class 39) and the service of promoting goods through shops and websites (Class 35). Therefore, a consumer who was aware of the applicant’s restaurant Rice and Fish might think not only that the restaurant Fish. Rice belonged to the same person, but also that it provided delivery services. Therefore, it was concluded that the contested TM could confuse consumers regarding the provider of the goods and services and thus was contrary to Paragraph 3(1) of Article 1483 of the code.

This decision is interesting as a good example of the positive practice of challenging trademark protection, where the focus is on the role of individualisation as a commercial designation, which is fairly new to Russian legislation.

Not every party can prove that a name used for the individualisation of a business contains all the necessary elements of a commercial designation, and thus can use it successfully as grounds to protect rights. Therefore, a rights holder should ensure that an application to register a trademark for a name being used when introducing new goods or services to the market is filed in a timely manner. In the course of appealing against trademark registrations, a trademark with an earlier priority date can save time and expense, including the cost of sociological research and the collection of documents showing actual use of individualisation, while conducting business before the priority date of the contested mark (Russian PTO decision of June 25 2015 on Application 2013713740 (Registration 518780) and Court for IP Rights Decision of December 21 2015 on Case СИП-527/2015).