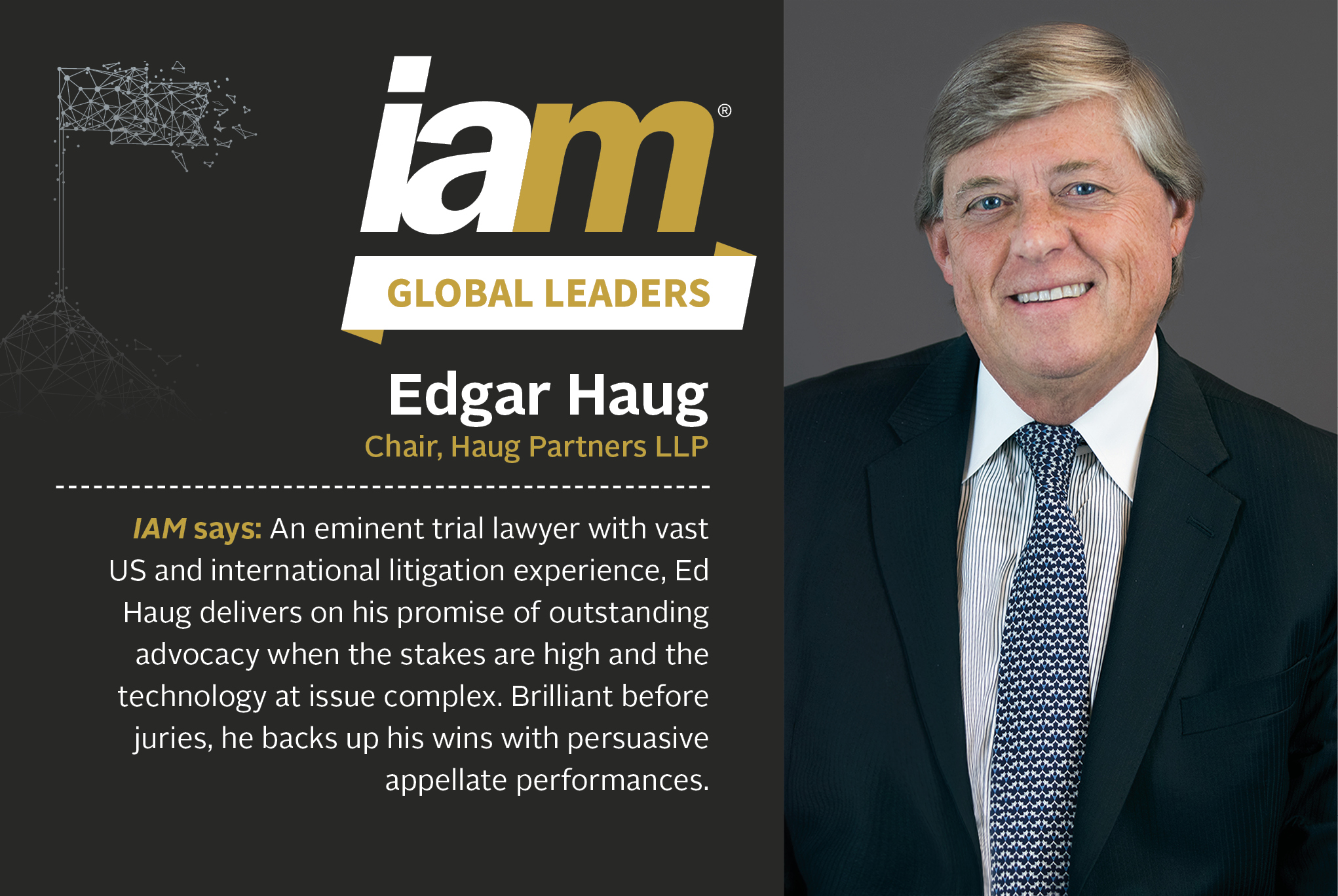 What led you to a career in intellectual property?

I always wanted to be an astronaut and after that a trial lawyer. Both career paths have certain characteristics in common, but the moon landings happened as I started studying aerospace engineering in college and the space programme ended, so I changed to chemical engineering and then went to law school. With a background in science, love of history and desire to explain complex ideas to juries, IP law and trial work were perfect for me.

What are some of the biggest changes that you have seen in US patent litigation over the course of your career?

Following the explosion of technology in the past 30 years, US patent litigation has become critically important to everyone, including our biggest industries, the government and juries. As for changes, specialist patent law firms have been absorbed by big general practice firms, which now handle this work themselves. However, the pendulum is swinging back. Further, the US Supreme Court has placed more focus on patent law and specifically on the Federal Circuit, which – since its creation in 1982 – has been trying to establish that law.

My two most memorable cases are Monsanto v Bowman and Glaxo v Genpharm. Monsanto, which we took on a pro bono basis, involved genetically engineered seeds and whether farmers could be forced to pay for them even if they just blew onto their fields. The case went all the way up to the US Supreme Court.

Glaxo was the first brand versus generic pharmaceutical case involving a billion-dollar drug , Zantac. The case had global implications and set the trend for hundreds of pharma cases to follow. Since then, Hatch-Waxman cases have been at the forefront of US patent litigation in terms of both number of cases and value in dispute, with billions of dollars involved. Haug Partners has been a leader in this field.

How are evolving client demands affecting the way that you manage your practice?

In the last decade or so clients have become more focused on litigation costs and effectiveness. As a result, we are continually looking for ways to develop our practice to be more efficient and effective. For example, we have entered into alternative fee arrangements that allow for a win-win scenario. I think that the future trend is for clients to retain ‘lean and mean’ lawyers and firms – Big Law will have serious challenges ahead in this regard.

You recently served as president of the Federal Circuit Bar Association (FCBA). What are some of your most memorable takeaways from this?

I very much enjoyed – and learned a lot from – frequent interactions with many of the judges sitting on the Federal Circuit. One of my most memorable experiences was helping to create and expand the Global Series of the FCBA. We organised programmes in Beijing, Geneva, Seoul, Shanghai and Tokyo, among many other places. There were thousands of participants and we shared our legal systems across international borders. I was also proud to become directly involved in the FCBA pro bono and student scholarship programmes.

What are the key skills required of any top-level IP litigator?

Like all top trial lawyers, it is the ability to listen and to explain very complicated and technical subject matter to lay judges and juries. You also have to exude leadership skills in being able to establish winning litigation teams and be the last one standing when the going gets tough – as it always does in major litigation.

There has been some evidence in recent years that the Federal Circuit is struggling to apply Supreme Court precedent when it comes to patentable subject matter. To what extent does this remain the case and would you encourage the Supreme Court to take another 101 case to help provide more clarity?

There is clearly uncertainty and ambiguity that has resulted from US Supreme Court cases over the past 10 years. The Supreme Court essentially left the Court of Appeals for the Federal Circuit (CAFC) alone from about 1982 until the late 1990s. But because the CAFC thought it was charged with creating a uniform system of patent laws nationwide, it tried in good faith to put in place many rules that were unique to patent issues and establish a precedent that could be followed across the United States. The Supreme Court then began to reverse CAFC decisions and essentially said that the patent laws are no different from any other area of the law. As such, 101 rulings have created controversy and should – and I think will – be taken up again by the Supreme Court. Hopefully this will provide clarity. Of course, Congress could step in, but no one can predict if or when that will happen.

You were recently a member of the CAFC advisory council to Chief Judge Prost. What do you think her impact has been on the CAFC?

Chief Judge Prost has had a profound impact on the CAFC. Her hard-working demeanour and unflappable personality have provided stability and civility to the court. She has had to manage the court against the backdrop of the America Invents Act and the creation of the PTAB, an active Supreme Court, a ballooning docket of cases and now the covid-19 pandemic.

As well as vast experience before the US courts, you have also represented clients in proceedings before the UK High Court, the German Federal Supreme Court and the Tokyo High Court. What do you see as the biggest differences between these key jurisdictions?

The United Kingdom is most similar to the United States – and understandably so. Both have a common law system and hold advocacy and due process as essential. Unlike Germany and Japan, the United Kingdom does not bifurcate infringement and validity issues, which are very important for litigants in the conduct and results of patent litigation. In addition, Germany and Japan grant injunctions following a bifurcated infringement judgment, which does not happen in the United States without a specific showing of irreparable harm. Germany differs from Japan because it is at the centre of disputes in Europe and has a highly experienced and well-organised court system. Global disputes can be – and are – decided in Germany to a much larger extent than in Japan.

How do you expect the US patent litigation landscape to change in the next five years?

I believe that US patent litigation will continue to increase. More cases will be filed at the district court level, the PTAB’s influence will be diminished and there will be a rebirth of specialised IP firms. Client demands require increasingly better trained and skilled patent professionals to handle their needs.

Edgar Haug is the chair of Haug Partners LLP and works in the firm’s New York office. He represents many of the world’s leading technology innovators, guiding clients through all aspects of maximising, enforcing and defending their IP portfolios. Mr Haug has extensive trial experience in federal courts nationwide and has served as president of the Federal Circuit Bar Association. He has lectured around the world on all aspects of trial advocacy, with a particular focus on IP matters.