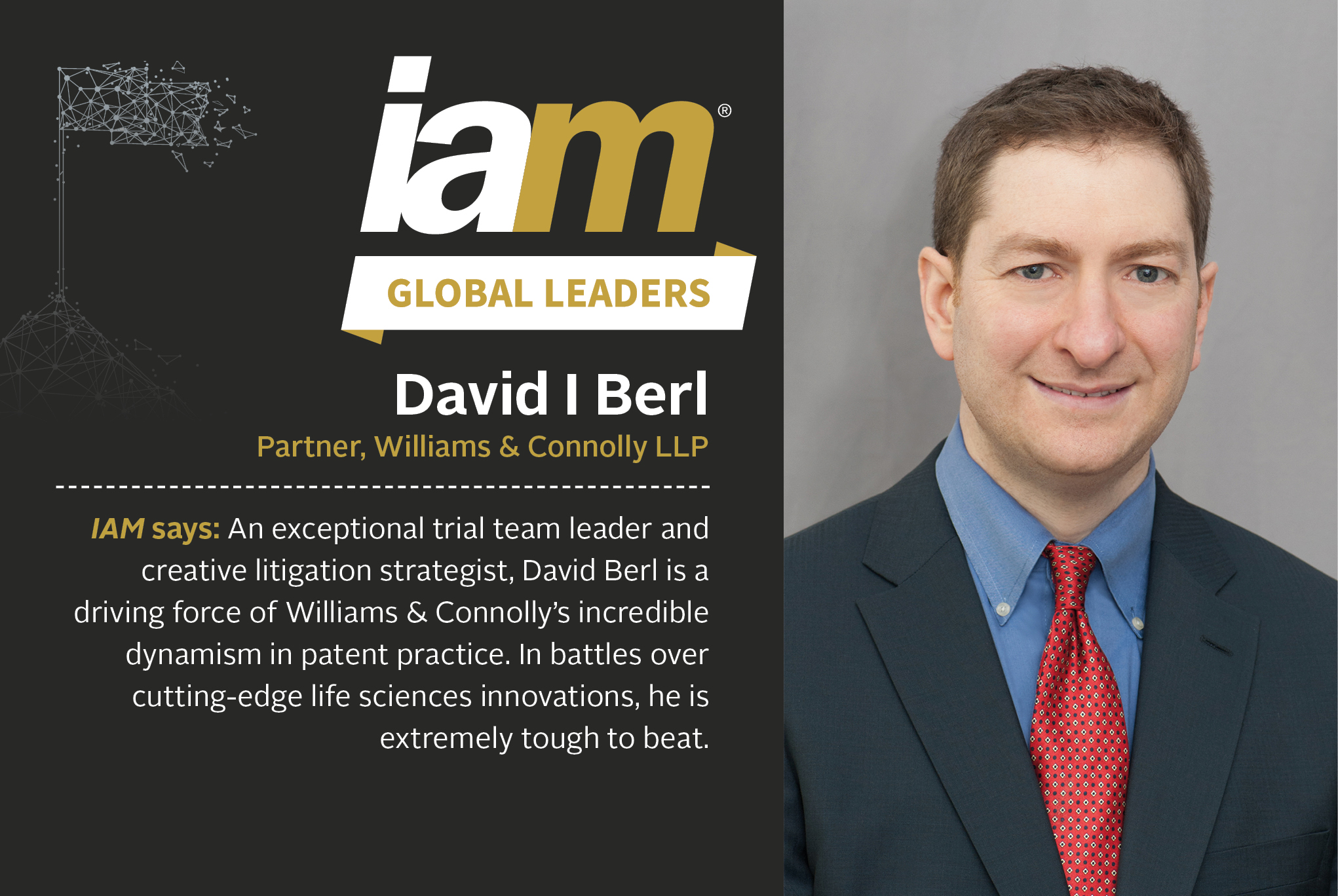 What led you to pursue a career in patent law?

I love science and there is no other job that permits one to explore a broad variety of scientific issues in such depth. Rather than spending an entire career focused on a specific area of technology, as scientists often must, patent trial lawyers have the privilege and opportunity to explore a new and important field of research every few months.

What are some of the biggest challenges that clients face in the biotech, pharmaceutical and energy fields?

Cases have become so large, with such a variable legal landscape (especially in the area of biotech), that predictability as to the timing and substance of results has diminished. The Biologics Price Competition and Innovation Act, in particular, enacted complicated rules with few enforcement mechanisms or consequences for violating them. While litigating on this unchartered frontier provides great opportunities for legal and strategic creativity, it also presents challenges for in-house counsel expected to deliver tangible advice with predictions and expectations informed by experience. Likewise, litigation between branded companies marketing drugs that modulate the same pharmacological pathway – which was relatively unusual less than two decades ago – has become ubiquitous and often unpredictable. Those cases have a wide variance of outcomes, which again presents enormous challenges in advising clients.

You have served as lead counsel in a number of Hatch-Waxman trials. What kinds of challenges tend to arise in these cases?

In some respects, there is a repetitive aspect to some Hatch-Waxman cases, especially for courts that try the vast majority of them. The challenge is to bring an invention to life – to show that it resulted from ingenuity, perseverance and counter-intuitive thinking, rather than an effort to procure further patent protection. Many judges try to discern at the outset whether the patents at issue claim inventions looking for patent protection or patents looking for inventions. Explaining to the court that the patent solves real-world problems in a manner contrary to expectations and contemporaneous disclosures and actions of scientists working in the field is at the core of every Hatch-Waxman case, irrespective of the particular legal frameworks at issue.

Your approach has been described as “creative, appropriately aggressive and technically superb”. How have you honed these skills?

In my experience, many attorneys spend their energy trying not to lose cases. They are afraid to make decisions that they could later regret or that their clients will later blame them for making. That is not how I approach cases. Risks occasionally need to be taken; it is sometimes appropriate to pursue creative strategies, and the conservative approach of kicking the proverbial can down the road rarely serves clients well. I live by a mantra transmitted to me by my mentors at the firm: “No indecision, no regret.” I analyse every angle before making a decision, but once the decision is made, it is made decisively and forcefully – post-factum second-guessing is not productive. Some decisions are right, some are wrong (hopefully more of the former than the latter), but my advice to young lawyers is: “Don’t confuse bad results with bad decisions, and don’t confuse good results with good decisions.” Human nature causes all of us to regret the decisions we made that were risky or bold, rather than those that were conservative. But that an undesirable result ensued does not make the decision wrong.

How do you expect recent global events to shape the biotech landscape?

The covid-19 pandemic presents an enormous opportunity for an industry that increasingly has been maligned for the prices of its products and, in some cases, its profits. I spent most of my first decade as an attorney litigating cases about anti-infective inventions and products. Many of those clients have since halted all research in those areas – decisions that were justifiable economically but ultimately harmful for society at large. This crisis, and the increased attention of governments on maintaining expertise and funding anti-viral and antibiotic research, will hopefully reverse this trend. In addition, notwithstanding the biotech industry’s centrality in helping the world emerge from this pandemic, the associated economic crisis will only increase the pressure to remain sensitive to the prices of treatments, which has trickled into the judicial and administrative spheres. The concept of ‘pharmacoeconomics’ will increasingly drive drug development, drug marketing and any resulting litigation.

David Berl is co-chair of the firm’s patent litigation practice and focuses principally on the biotechnology, pharmaceutical and energy fields. Mr Berl has served as lead counsel in Hatch-Waxman trials, in appellate proceedings before the Court of Appeals for the Federal Circuit and in inter partes review proceedings before the USPTO. He regularly serves as lead counsel in significant patent litigations and has tried numerous patent cases that have resulted in favourable verdicts for his clients.