By T Andrew Culbert, Kevin A Zeck and Jeremy Keeney

Several owners of cellular standard-essential patents (SEPs) have developed a lucrative licensing model to monetise SEPs. But in May 2019 that licensing model may well have been upended when Judge Lucy Koh of the US District Court of the Northern District of California issued her decision in Federal Trade Commission v Qualcomm Incorporated (5:17-cv-0220).

The judge’s decision could significantly disrupt current SEP licensing practices. This chapter explores the practical implications of her decision and how that decision, if upheld, will likely affect current SEP business models. It also provides a background on the SEP licensing model used by Qualcomm, examines the contours of the ‘freedom to contract’ principle that SEP owners have used to justify their licensing models and discusses how the judge embraced a robust exception to that principle.

Today’s cellular communication networks stem from a collaborative effort involving hundreds of companies. These companies include competitors such as Qualcomm, Ericsson, Nokia, Huawei, Apple, AT&T and Verizon. This collaboration has taken place within the standard setting organisations (SSOs) that comprise the Third Generation Partnership Project (3GPP). Within these SSOs, scores of technical committees meet several times a year to develop detailed specifications to define the mandatory elements of the 2G, 3G, 4G and 5G cellular networks.

Although standardisation can benefit consumers, it comes with significant costs. Alternative innovations are passed over in favour of the collaboratively chosen solutions. Consequently, any market for alternative innovations evaporates. Moreover, the standardisation process creates the potential for anti-competitive conduct. The companies that engage with the technical committees often file patent applications with specifications broad enough to cover aspects of the standards under collaborative development. The resulting patents contain claims that are intended to be necessarily practised when a company uses or makes standards-compliant technology and are thus considered essential. As a result, each SSO participant has an opportunity to obtain enormous economic leverage. The Ninth Circuit US Court of Appeals described it this way: “The development of standards… creates an opportunity for companies to engage in anti-competitive behavior. Most notably, once a standard becomes widely adopted, SEPs holders obtain substantial leverage over new product developers, who have little choice but to incorporate SEP technologies into their products.” (Microsoft Corp v Motorola Inc, 795 F3d 1024, 1030-31 (9th Cir 2015).)

Although hundreds of companies participate in this collaboration, only a small subset monetise their SEPs primarily through licensing. Most reap substantial economic rewards precisely because the standards are optimised for the products that they sell. However, some SEP owners have sought to supplement their product revenues by aggressively licensing their SEPs.

These licensors have developed a model that maximises royalties by refusing to provide exhaustive upstream licences. A simple review of the cellular networking industry helps to illustrate how it works. The industry includes network service providers, network-infrastructure manufacturers, device manufacturers, modem chip makers and various manufacturers of associated components. Each participant uses different portions of standards-compliant technology, and each is subject to unique market-segment conditions. So, for instance, network service providers, such as AT&T, contract with network infrastructure providers, such as Ericsson, who work with chip makers, such as Qualcomm, to build a functioning cellular network. The network providers then contract with device makers, such as Apple, to offer consumers products. To participate in this integrated industry, device manufacturers must incorporate standards-compliant baseband modem chips into their products. These chips handle communications with the network provider’s cellular communications network.

Consumers are the backbone of this network-based economy. They currently pay both network providers and device makers for access to the network. In turn, network providers and device makers pay for the intellectual property entailed in the network access. In a very real sense, consumers pay twice for that intellectual property.

This complex industry can be distilled down to five key categories of participants (see Figure 1).

As the licensing model developed, SEP owners recognised that licensing programmes which focused on manufacturers of branded devices resulted in substantially higher SEP royalties. Several things potentially explain this, including: 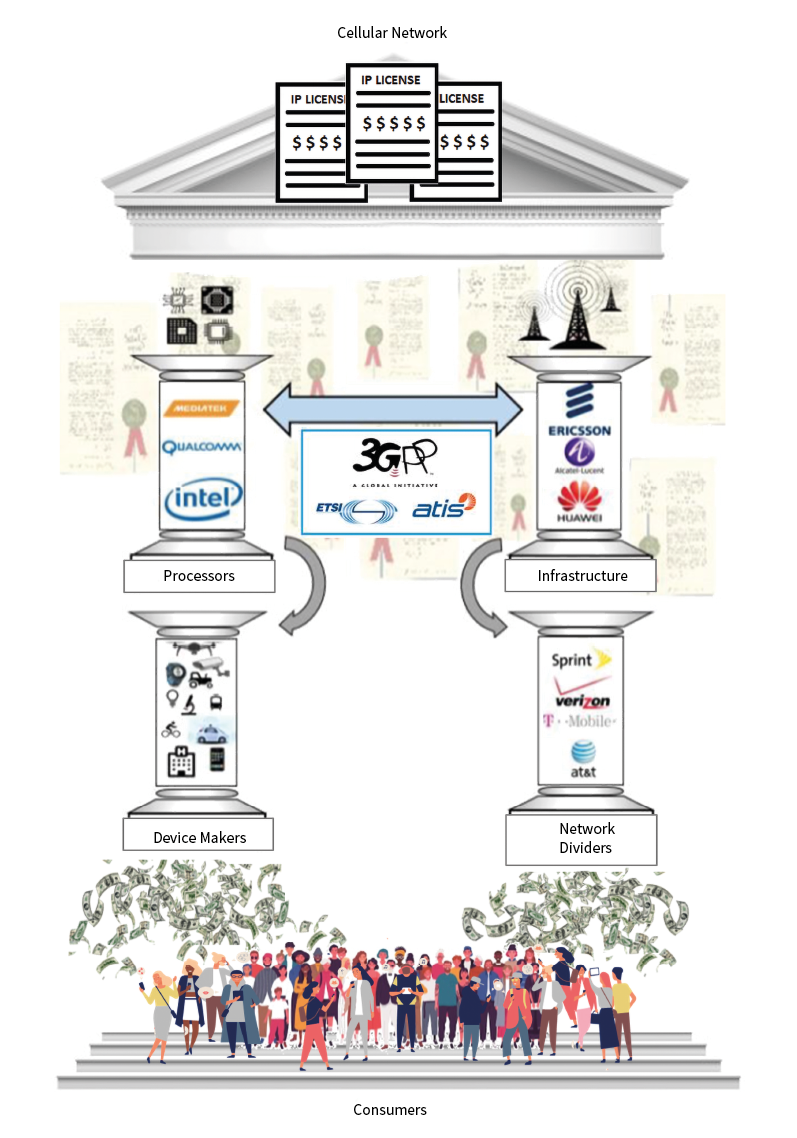 A succinct illustration of this strategy was set out in a presentation from Ericsson (see Figure 2).

In the left-hand image of Figure 2, the SEP owner licenses the chip manufacturer and its patent rights are exhausted as to every downstream entity, eliminating the potential for monetisation at more profitable levels. But in the right-hand image, the SEP owner licenses the product brand owner, minimising exhaustion and possible exposure to patent suits from upstream participants, while maximising licensing revenues.

The prospect of licences from the makers of 34 billion devices has created a cottage industry that exploits the expanding use of cellular connectivity (Richard Lloyd, “Avanci announces pricing for auto sector - range from $3 to $15 per car” in IAM (4 December 2017), www.iam-media.com/frandseps/avanci-announces-pricing-auto-sector-range-… (accessed 24 July 2019)). Indeed, one company has announced plans to “focus… on licensing wireless technology into different verticals in the Internet of Things (IoT)”. The SEPs and contributions to the standard are the same, but the royalties are maximised to take advantage of conditions within market segments.

Freedom to contract and refusal to deal

Qualcomm opposed the Federal Trade Commission’s (FTC) complaint by relying on a foundational principle of American capitalism: freedom to contract.

The salient characteristic of the described SEP licensing model is avoidance of exhaustive licences to market participants upstream or downstream of the most profitable market segment: the branded device retailer. By collectively refusing to license at the component and original device manufacturer level (eg, Foxconn), SEP owners have maximised the profitability of their SEP portfolios.

SEP owners have likely felt empowered to concentrate their licensing activities at the branded-device tier based on the broadly recognised principle that a company ordinarily has complete freedom to contract and thus can refuse to deal with whomever it wants.

The US Supreme Court, however, has recognised that this broad freedom to contract must give way in certain circumstances. In some situations, the Sherman Act requires a company with market power to do business with its rivals. The contours of this exception have not been well defined because only a limited number of cases have addressed it.

The Supreme Court first considered the intersection of freedom to contract principles and the Sherman Act in United States v Terminal Railroad Association of St Louis (224 US 383 (1912)). The Terminal Railroad Association (TRA) acquired a bridge where east-west railway tracks bottlenecked in St Louis. It then changed its bylaws to prevent new railways from joining the association and using the facilities. The Supreme Court found this to be anti-competitive and required, in part, that the TRA allow competing railways to use the bottlenecked facilities on “just and reasonable terms”.

Many years later, the Supreme Court considered a dominant firm’s refusal to deal with a competitor under the auspices of Section 2 of the Sherman Act (Aspen Skiing Company v Aspen Highlands Skiing Corporation, 472 US 585 (1985)). The plaintiff owned one of the four major downhill skiing areas near Aspen CO. The defendant owned the other three and had previously cooperatively promoted all four ski areas. However, the defendant suddenly changed course one year and wanted to drastically reduce the plaintiff’s share from the arrangement, a proposal that the defendant understood the plaintiff could not accept. When the plaintiff rejected the proposal, the defendant discontinued the co-promotion arrangement. The Supreme Court held that the defendant’s conduct violated Section 2 because, in prominent part, the defendant’s withdrawal from the existing venture showed that it was foregoing short-term profits in favour of the longer-term advantage of harming its competitor.

More recently, the Supreme Court addressed a refusal to deal in Verizon Communications Inc v Law Offices of Curtis V Trinko LLP (540 US 398 (2004)) and declined to extend Aspen Skiing, calling it a limited exception to the general principle of freedom to contract. Trinko involved an effort by small phone carriers to compel large phone carriers to provide cost-based access to their network components, but a complex regulatory scheme did not mandate such access. Under these facts, the Supreme Court distinguished Aspen Skiin.

FRAND exception to freedom of contract

Until the judge issued her decision in FTC v Qualcomm, no court had examined whether the existence of FRAND obligations could impact on a company’s freedom to engage in a profit-maximising licensing programme. But given the FRAND obligations imposed on Qualcomm, the judge determined that Aspen Skiing controlled. Consequently, she found that Qualcomm had a duty to license its SEPs to competing chip makers.

The facts that were key in the judge’s analysis included the following:

On 23 August 2019 a motions panel of the Ninth Circuit stayed the injunction, holding that Qualcomm had demonstrated “serious questions on the merits of district court’s determination that Qualcomm has an antirust duty to license its SEPs to rival chip suppliers”. It called Aspen Skiing a “very limited exception to” the general rule of freedom to contract (Appeal 19-16122, Dkt 74 at 3 to 4). The Ninth Circuit will consider the merits of Qualcomm’s appeal in early 2020.

The decision, if upheld, will have many significant practical implications. First, SEP owners may face competition law liability if they continue to refuse to deal with certain market tiers for standards-compliant products and services. SEP owners, such as Qualcomm, will be required to license at each market tier – both upstream and downstream. Moreover, the licences will need to be exhaustive. This outcome will reduce SEP owner profits, complicate and reduce branded-device licensing and pose thorny questions for both component suppliers and licensors.

Second, the decision complicates portfolio licensing of SEPs. The practice of bundling licences for SEPs with licenses for non-SEPs will likely disappear as licensees insist on an SEP-only license.

Third, an SEP owner may be unable to pursue litigation of SEPs against a branded device company without the upstream component suppliers and network providers added as necessary parties. This will force SEP owners to grapple with the actual value of their patents at the most basic level of connectivity, divorced from the many features and programmes added by the device maker. Moreover, component suppliers may be justly concerned that efforts to avoid taking the exhaustive licence, or efforts to disclaim indemnification obligations, could create independent liability for attempting to exploit a business model deemed anti-competitive.

Fourth, the SSOs may need to reconsider their laissez-faire policies that could be viewed as implicitly participating in an anti-competitive venture.

Fifth, the judge’s decision severely chastised Qualcomm for basing its royalty on the price of the device (eg, a handset). Significantly, the judge framed this criticism based on principles of competition law and patent law, not contract law. As a result, the ongoing efforts of SEP owners to retain their business model by influencing the policy decision-makers at the SSOs will likely come to naught.

Finally, by basing the outcome on broad principles of competition law, the decision avoids implicating some of the venue-specific issues that arise when FRAND licensing is considered through a contract law or patent law lens. Some of the contract cases, for example, have reached different results on the import of the FRAND commitment based on whether the contract was interpreted under the laws of particular nations. In Motorola, the Ninth Circuit interpreted FRAND based on principles of US contract law. In HTC v Ericsson, on the other hand, the district court in East Texas reached a conflicting interpretation based on the contract law of France. Similar potential inconsistencies arise when courts apply the territorial doctrines governing patent law. Applying competition law to the worldwide market of cellular products could avoid these possible venue-specific inconsistencies. Consequently, the broad brush of antitrust enforcement may provide a mechanism for global harmonisation of SEP licensing. 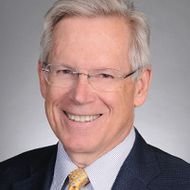 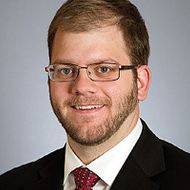 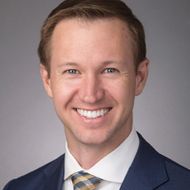