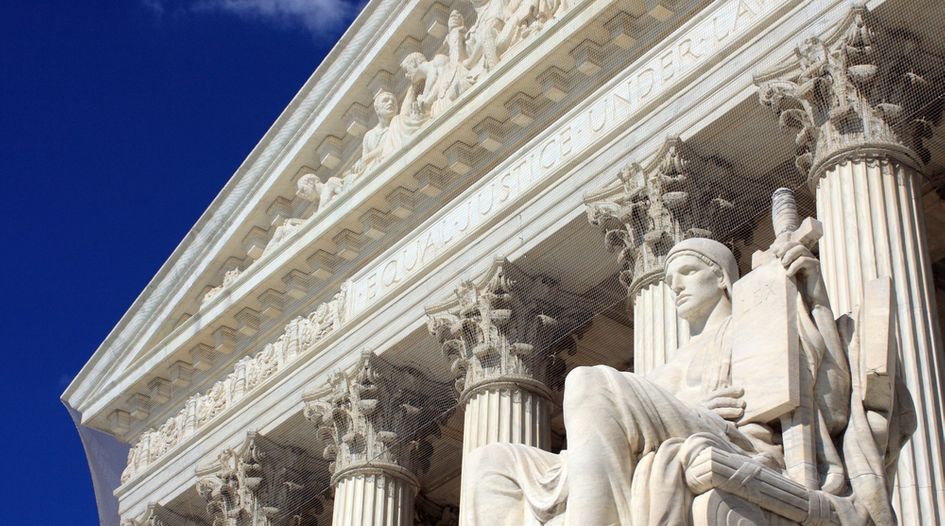 The current SCOTUS term has been a relatively quiet one for patent cases. However, Jonathan Stroud explains, an administrative law dispute over the extent of deference granted to government agencies has implications for all parts of the executive, including the USPTO

The most influential Supreme Court appeal from the Court of Appeals for the Federal Circuit this decade won’t be SAS Institue, or Alice, or TC Heartland. It will instead be a case—argued in March—most patent lawyers have never heard of. But they should take note; it will seriously upend patent law.

The case, Kisor v Wilkie, is a sleepy veteran’s appeal that has turned into ground zero for the reconstituted US Supreme Court’s expected antagonism toward the administrative state. It has drawn dozens of amicus briefs and law review articles (and others poised to submit once a ruling issues), as well as symposiums from administrative law gurus rushing to defend (or encourage) what feels like the inevitable reversal of 64 years of precedent.

It asks explicitly “whether the Court should overrule Auer v Robbins and Bowles v Seminole Rock & Sand Co”. With at least four justices granting certiorari—and it’s a safe bet which ones—it seems a foregone conclusion that such deference is toast.  So, why should you care?

To back up, Auer (or Seminole Rock) deference is the longstanding administrative law doctrine of deferring to an agency’s interpretation of its own regulations, whether by interpretive rule, policy pronouncement, intervention or other public statement (or action).  That’s roughly 95% of what an agency does; after it promulgates regulations, the vast bulk of its work is to interpret and implement them. I oversimplify, but just a bit.

Auer deference goes a bit further than the more-known Chevron variety, which defers to an agency’s statutory interpretation (via regulation) if the statute is ambiguous (nonetheless, look out; Chevron maybe up next). Administrative deference was the odd issue that for decades commanded much of the Supreme Court’s agreement, whether liberal or conservative.

Justice Scalia, having come from an administrative position, was one of the occasional champions for various forms of deferring to the executive; Justice Kennedy was often sympathetic; and justices Breyer, Souter and Stevens have all had their say. It led to a 50-year expansion of executive power, one described in (and apparently capped by) Justice Kagan’s exhaustive “Presidential Power” law review article from the early 2000s.

But the court has lost justices Kennedy and Scalia, and has added, importantly, Justice Kavanaugh, long a harsh DC Circuit critic of expansive views of executive authority. You don’t have to look far for those who predicted that the reconstituted court would soon turn its attention to the administrative state. However just how soon was a shock, at least to me.

Kisor, though, was the perfect storm - an unopposed appeal flying under the radar, seemingly a low-profile veteran’s case based on an obscure canon of construction, defended only by the Trump administration’s Solicitor General. After the case was granted cert, however, it became clear it was the vehicle set to turn the tide on administrative law.

The oral argument, held in late March, dealt with veterans’ benefits for Mr Kisor - a US marine in the Vietnam War - who sought additional benefits for his post-traumatic-stress disorder. But it ended up on an issue Chief Justice John Roberts described as “going to the heart of administrative law”, not unkindly - whether the courts should give any credit to agency expertise.

At the oral arguments, the court seemed ready to say they shouldn’t. Comments from justices Kavanaugh, Gorsuch and Chief Justice Roberts made clear where they stand (though Roberts offered his now-trademark moderation); the usual silence from Justice Thomas and a quiet Justice Alito left no indication that they would not support the conservative court’s seeming fait accompli of reversal.

Justice Kagan, when urged by the parties that the court often reverses itself, quipped: “There aren’t very many of those cases. And we take it super-seriously when we do and we need a – I mean we used to – and we need a good reason for it.” Her jab did not go unnoticed. She also noted that: “[T]here might be a problem of a lack of adversarialness here.” That was in response to what can only be described as a lukewarm defence by the Solicitor General of the court’s Auer doctrine.

In its brief and at oral argument, the government offered up that parts of Auer were problematic, defending it only insofar as asking the court to avoid overturning too much precedent at once. On the other side, Paul Hughes, representing Mr Kisor, had good support from known firms and experienced practitioners; the results seemed telegraphed from the grant of cert itself.

That, coupled with powerful and lengthy amicus support from more conservative sources, means that, if nothing changes, we will look back and mark 2019 as the high-water mark for executive power generally.  It means a clear reversal of a trend toward deference of agency expertise and a reassertion of the role of Article III in the executive process.

That sea change should ripple throughout the US federal government. Whatever the intent, it may make it even less capable of doing its job well (as if it weren’t bad enough already.)  It will certainly curtail President Trump’s power, and executive power generally.

And this affects patent law how?  Plenty. Sometimes we forget that the USPTO is even subject to administrative law principles; but you can bet your bottom dollar we’ll know now. For starters, you can kiss any chance of the USPTO director’s actions getting any real judicial deference goodbye. While another form of deference known as Skidmore does technically apply, it has frequently been observed that this really amounts to de novo review—ie, courts only defer when the reasoning of the agency is sound (which courts would do anyhow absent deference, so, no deference).

That means searching judicial review of all the USPTO’s actions - memoranda, guidance, public policy statements, guides, the Manual of Patent Examining Procedure (MPEP) - not just the few regulations promulgated, but all of the day-to-day.  It might mean facial administrative law challenges in federal court, which, as unrelated to patents directly, could be filed before the DC Circuit, or elsewhere. It could mean the end of the presumption of validity, which is premised on deference to the expertise of the USPTO examination. It certainly does not bode well for any recognition of the agency’s technical expertise, which is the whole point of the agency’s existence and constitution in the first place; or for any Federal Circuit recognition of any PTAB “precedent” opinion, or even the binding nature of the Trial Practice Guide.

So in the end, it seems clear Auer is destined for the dustbin; and that means that Kisor represents a remarkable, if wonky, moment in the court’s history.  It is as if the Titanic executed a 10-point turn.

After all, how often does the Supreme Court explicitly overrule 64 years of its own precedent?