Unified Patents and Lex Machina released their patent litigation figures for 2015 in the first week of January; both confirmed that it was a very busy 12 months.

Both also included numbers from the Patent Trial and Appeal Board (PTAB), which also had its busiest 12 months. Some 1,796 reviews were filed, up from 1,677 (according to Unified) in 2014. Notably, however, the second half of 2015 saw two quarters of successive drops in new reviews. This may point to a broader decline in activity at the PTAB – perhaps because many of what are considered to be the most problematic patents have now been reviewed or are moving through the process.

What makes the numbers so remarkable is that many had expected another fall in litigation after the drop in 2014. Prevailing market conditions and the climate in the courts in particular, which has become increasingly hostile for plaintiffs, made the case for a predicted drop a compelling one. Erich Spangenberg, the founder of IPNav and a man who knows more than most about district court litigation in the United States, even made a continued decline one of his forecasts for 2015. “I expect that the total cases filed in 2015 will fall over 50% compared with 2014,” he said. “The decline can be attributed to the growth in IPRs, the Supreme Court’s Alice decision and, most significantly, mandatory/presumptive fee shifting.” Spangenberg was quick to concede in his 2016 predictions that he had got that one wildly wrong.

So what has been going on? For one thing, 2015 saw two notable peaks in activity, in the second and fourth quarters of the year. Brian Howard, a legal data scientist at Lex Machina, described activity as “lumpy”, adding: “It’s hard to say exactly why that was the case and especially why the third quarter was a low point.”

The three months stretching from April to June were the busiest in recent years – Unified puts the total number of filings for that period at 1,657, while Lex has it marginally higher at 1,663. That spurt could be due to the threat of patent reform being passed in Congress. The second quarter was particularly busy on Capitol Hill as the bipartisan PATENT Act took shape in the Senate and hearings continued on the House of Representatives’ Innovation Act, which had been reintroduced to great fanfare earlier in the year.

While both bills passed out of committee, it was the decision not to bring the Innovation Act to a vote on the floor of the House of Representatives in July which ultimately put patent reform on hold. The threat of new legislation – much of which is regarded unfavourably by most patent owners that see monetisation as an important source of income – hovering over the market in the first half of the year may have led some plaintiffs to file their cases in what they considered to be comparatively more friendly conditions.

The second peak in new filings, from October to December, was undoubtedly fuelled by the change in pleading standards which came into effect on December 1. Whereas previously a plaintiff could merely put a defendant on notice of its infringement claims, under the new regime a plaintiff must show that its claims are plausible. In other words, the burden on those asserting patents through the US courts has increased. The move had long been trailed, as it was formally adopted by the Supreme Court in April 2015 having been recommended by the Judicial Conference of the United States the year before. There was thus a massive jump in filings in November, and presumably some new cases that would otherwise have been filed in the first quarter of 2016 were filed in the days around Thanksgiving instead.

Putting specifics aside, some broader strategic trends also appear to be developing. For one thing, it would seem that some individual plaintiffs are filing more cases and capturing more defendants, quite often involving the same patents. In previous research done on the first half of 2015, Lex Machina produced data showing that the number of plaintiffs was at its lowest level in years. Neither Lex nor Unified has done that deep a dive for the overall 2015 amounts as yet – separating out the total number of plaintiffs is difficult and open to error – but there are some signs that the trend continued through the second half of the year.

As part of its analysis, Lex Machina took a closer look at the number of new cases filed in the Eastern District of Texas, which overwhelmingly remains the preferred venue for patent plaintiffs and NPEs in particular. It found that the big jump there was fuelled by what it calls “high-volume plaintiffs” (those that file at least 10 cases per year). They were particularly busy in the second and fourth quarters, when they filed 692 and 548 new cases respectively.

Lex Machina added further detail on this point in a blog post looking at the day-by-day distribution of new cases across the United States in November. That showed a massive spike in new cases filed on November 30, when 259 suits were brought. According to the firm’s research, the eight plaintiffs that filed at least 10 cases on the final day of November brought 139 separate cases, more than half of the record total.

Unified did not go into as much detail, but its research showed that the top 10 assertion entities filed 633 cases between them in 2015 – more than 10% of the total new cases for the year. This suggests that a relatively small group of plaintiffs are adhering to what many see as the traditional ‘troll’ model – filing multiple suits against a broad range of defendants in the hope of driving settlements. Although most of the details of a settlement remain private, it would seem that the tougher market conditions for patent owners are driving down the value of those settlements, so it has become much more of a volume play for some. 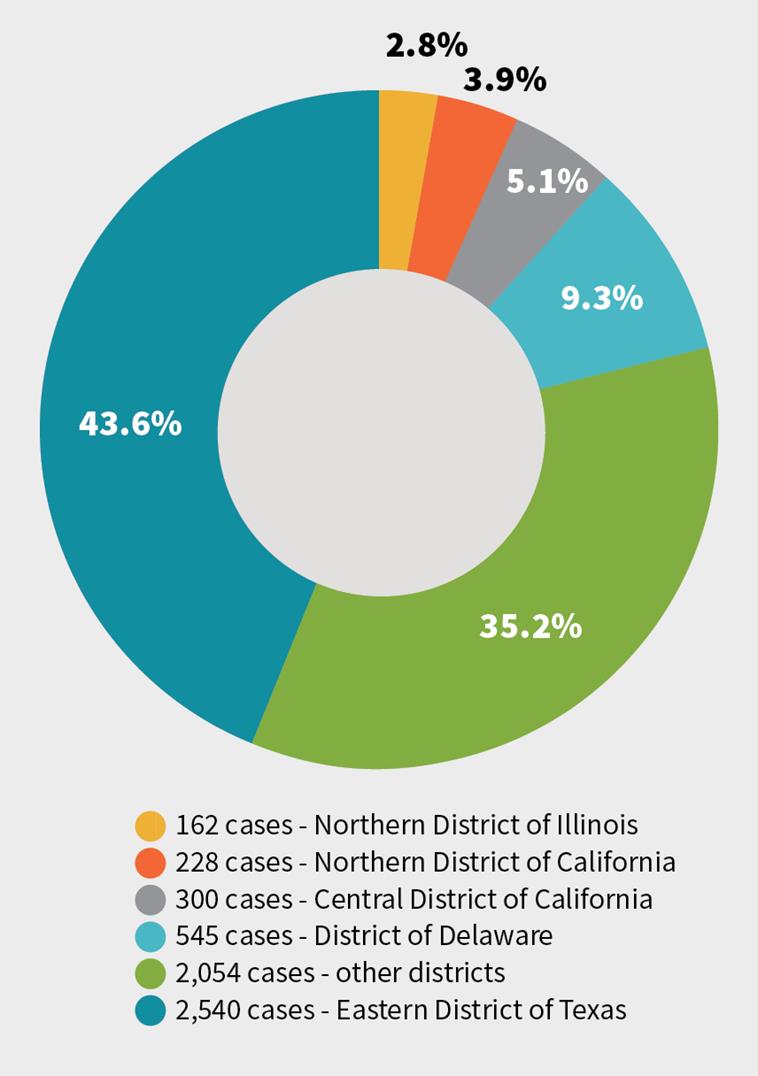 The popularity of inter partes reviews is probably also having an effect on new lawsuits. Plaintiffs can now be fairly sure that when they file a case, they will be hit with a review challenging the validity of their patents. While the new system, which was introduced by the America Invents Act, was trumpeted as a more efficient and cheaper alternative to the courts for challenging patent validity, the sheer volume of reviews filed against some patent owners has made the litigation process longer and in some cases a lot more expensive.

In order to level the playing field a little, some plaintiffs may be filing more lawsuits involving more patents, so that defendants are forced to file more reviews, thus driving up their costs and making the prospect of a settlement much more appealing. According to Unified’s analysis, more settlements are happening before inter partes review and then, once a review has been filed, before the institution decision. For all the talk of how reviews, and inter partes reviews in particular, are posing a very real threat to patent owners, one less widely reported aspect is how they are fundamentally changing the settlement dynamic in patent disputes.

No analysis of last year’s numbers is complete without some discussion of the Eastern District of Texas. Both Lex Machina and Unified laid bare just how popular it remains with patent owners. According to both, 44% of all patent litigation was filed in East Texas last year – a staggering proportion even for the fabled ‘rocket docket’.

What is even more remarkable is just how many of those cases continue to go to just one judge – James Gilstrap. According to Lex Machina, between 2012 and 2015 some 4,350 patent lawsuits were filed with him – 3,000 more than the next-highest judge. Whatever your view of the state of patent litigation, that cannot be seen as healthy.

Of course, there is a reason why East Texas continues to be so popular: for many patent owners, it remains the only district where they feel they will get a fair shot. And overall, many patent owners feel that they still have to litigate first to stave off the threat of a declaratory judgment from an alleged infringer if they try to initiate licensing negotiations – while other alleged infringers will not talk until a suit is filed. What is more, another clear reason why the number of patent disputes has been at a historic high for the last four years is the joinder provision in the America Invents Act.

No doubt the headline figures from 2015 will crop up in debates on legislative patent reform in the coming months. Context, however, remains key: the fact is that it has never been tougher to be a plaintiff in a US patent case.