I possess the energy, experience and ability to make patents great again, says Rader in pitch for USPTO top job

Randall Rader, the outspoken former chief judge of the Court of Appeals for the Federal Circuit, has confirmed that he remains a candidate for the position of Director of the US Patent and Trademark Office in the new Trump administration, and that he has “the energy, experience, and ability to "make patents great again" as part of the campaign to "make America great again.””

Since President Trump’s inauguration the leadership of the agency has been in something of a limbo. This blog and others have reported that Michelle Lee was widely expected to be reappointed soon after the new president took over. That caught most of the US patent community by surprise as it was assumed that anyone associated with the previous government would be shown the door. However, since that – very strong – rumour surfaced, there has been no confirmation and the USPTO seems to have gone into lockdown, with no-one at the office prepared to comment either on or off the record about who is in charge. Lee herself has not been seen or heard from for almost two weeks now, though – as noted by IP Watchdog – she is slated to deliver the keynote address at an event in San Francisco today, 2nd February (11.45 am PST).

Despite the radio silence, though, the expectation seems to be that Lee will be reappointed, at least temporarily; but since the early stories that she might be staying on, sources have also told us that others who are said to be on the shortlist, namely Johnson & Johnson’s Phil Johnson and Rader, are still in the running.

I got in touch with Rader to ask about his ongoing interest in the job and in an emailed reply he made clear he is very keen. Here’s his full response:

Yes, I remain a candidate for the Director position and believe that I possess the energy, experience, and ability to "make patents great again" as part of the campaign to "make America great again."  The President seems to be emphasising jobs.  I have said often that one key to protect US jobs is to protect the intellectual property that creates and sustains those jobs.

I hope that I get the chance to serve this Administration at the USPTO.

After a 26-year career on the bench, Rader left the Federal Circuit in 2014 after a letter came to light in which he endorsed a leading member of the patent bar. The circumstances of this exit could count against him, but there’s no doubt a strong constituency in the patent community would like to see him appointed.

On the other hand, there is also a part that would be bitterly opposed – namely big tech. Silicon Valley may not have the same kind of access to the White House as it did under President Obama, but it remains among the biggest spenders in DC and its likely opposition could still derail a Rader bid.

In recent years, the ex-chief judge has become an outspoken critic of the erosion of patent rights in the US, with much of his ire, either implicitly or explicitly, directed at the denizens of Silicon Valley. He has also been sharply critical of the Patent Trial and Appeal Board (PTAB) and the advent of inter partes reviews, accusing the Board, when he was still on the Federal Circuit, of “acting as death squads, killing property rights”. That would appear to place him at odds with many large tech businesses, which have become the most active users of IPRs in the last five years.

As the Supreme Court’s Cuozzo decision in 2016 made clear, the USPTO Director has substantial power to revise the rules under which the PTAB operates and, were he in charge, Rader could be expected to make use of that authority. Likewise, he may also want to revisit examination guidelines created in response to recent Supreme Court judgments such as Alice and Mayo – two decisions he has heavily and regularly criticised. Rader was still on the Federal Circuit when it heard, en banc, Alice Corp v CLS Bank, a case which he told IAM in 2014 was the greatest judicial failure of his career.

In that same interview he also referred to a “clash of cultures” between the CAFC, which strives to provide clear answers to business-critical questions, and the Supreme Court which, he said, “doesn’t really serve the commercial world very well”. He also blasted SCOTUS for making deal-making riskier: “They’ve stepped in so often to disrupt the commercial wisdom of the Federal Circuit that now there’s an uncertainty inherent in a good deal of the intellectual property legal landscape that jeopardises the value of IP and the innovation policy of the nation.”

Many readers of this blog would probably agree with Rader’s sentiments, but whether that’s enough to land him the top job at the USPTO is another matter. If he were to get his feet under the director's desk, it would be a clear signal for significant change in the US patent landscape – and a major defeat for big tech. Of the three most prominent candidates, Rader is probably the long-shot; but with a penchant for straight-talk and a willingness to shake things up, it’s just possible that he may be exactly the kind of person President Trump wants in his administration. 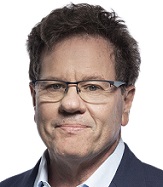