The EPO's Battistelli era will soon be over; perhaps the EUIPO boss is being lined up to succeed him

UPDATE - This blog was updated on 5th July to include figures from the EPO on support for strikes which had been called for 30th June and 3rd July 2017.

The next President of the European Patent Office will not be required to possess any previous experience of working in a patent-related field, though it would be nice; but he or she will absolutely have to have “thorough knowledge and proven practical application of modern management methods, including an outstanding ability to establish and foster social dialogue”. So says the notice posted yesterday on the EPO website inviting applications from qualified individuals to succeed current incumbent Benoît Battistelli, whose term in office is due to end on 30th June 2018.

That such a condition is laid out, alongside another one which requires the successful candidate to demonstrate “a genuine aptitude for communication, negotiating skills and the ability to make their opinions count”, speaks volumes for what has unfolded over recent years at the EPO, as relations between senior management and a significant proportion of staff have broken down almost completely. Most recently, strikes were called for 30th June and 3rd July – though figures supplied by the EPO via a Tweet suggest support for them was low, with just 8% participation in the full day stoppage and only 4% in the half day one. .

Staff union SUEPO may have largely failed to halt the reforms introduced by Battistelli, but the fact that the President’s job has been advertised at all must be seen as a feather in its cap. To the best of my knowledge the criteria for selecting an EPO president has never been made public before - usually the recruitment process is conducted with no transparency and with no public comment until a winner emerges.

That there will now be a set of points against which to judge future presidential performance is a major step forward. In theory, it should make the Administrative Council – which takes the final decision on who gets the job – much more openly responsible for its choice and, therefore, more likely to hold the new president to account publicly. Whether it will work out like that in practice, though, remains to be seen: council members may well continue to be more comfortable doing their work behind closed doors, however unsatisfactory that is for EPO users and staff.

What the announcement also strongly indicates is that the current president is going absolutely nowhere for the next year. There have been some rumours of an early Battistelli departure, but if there were any meat to them, it is hard to believe the post would have been advertised yesterday with the specific start date of 1st July 2018.

Although Battistelli may be unpopular with certain sections of the staff, he has basically done everything the Administrative Council could have asked of him. He has improved the office’s financial position, increased its global influence and improved productivity, all while maintaining the agency’s position as the first among equals in the IP5. In fact, there is a very strong argument for saying that many members of the council have hidden behind Battistelli – allowing him to take all the flak for instituting reforms that they felt had to be implemented despite objections from examiners.

The issue for Battistelli’s successor, though, will be to ensure that the gains are permanent – and have not been achieved via quick wins that put the long-term ability of the office to issue top quality patents at risk. In the end, that will depend on having a positive relationship with the entire examiner corps. Whatever side you take in the staff versus management stand-off, it is abundantly clear that the current state of affairs is profoundly unhealthy, unsustainable and in need of change.

The big question is who will succeed Battistelli. Up to now, the job has usually been filled by the head of a national IP office whose country is a member state of the European Patent Organisation. The announced criteria do conceivably leave that option open, but the focus on knowledge of how international organisations work, modern management techniques, expert communication skills and fostering social dialogue do seem to make that less likely. It is hard to think of any of the national heads who can easily demonstrate that set of attributes. However, there is one potential European candidate who does: Antonio Campinos, the current man in charge at the EU IP Office and, before that, head of Portugal’s National Institute of Industrial Property.

Campinos became the executive director of OHIM, as it was then known, back in 2010; and although he has spent the last seven years majoring on trademarks and designs, his time as head of the Portuguese IP office gave him plenty of experience of working in patents at an international level. During his tenure in Alicante, Campinos has successfully implemented a number of major changes, established the EUIPO as one of the world’s premier trademark issuing agencies and has done it all while maintaining a good social dialogue with the office’s staff.

I have absolutely no inside knowledge on this, but to my eyes yesterday’s announcement looks like it could have been written with Campinos in mind; though whether he would actually be interested is another matter. If it is not to be him, another intriguing possibility is that someone from the private sector might be brought in. The US has generally tended to appoint either senior in-house or private practice patent lawyers to the USPTO Director’s role and it would be interesting to see what would happen should the EPO go the same way. But I would rate that a long-shot given that experience of running an international organisation is not something that many corporate IP heads, or law firm partners, possess - though people further up the business ladder do, of course. Whatever happens, we are likely to find out who gets the job well before Battistelli formally steps down. We’ll keep you posted … 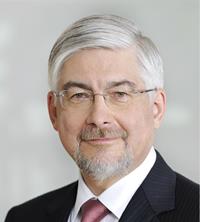