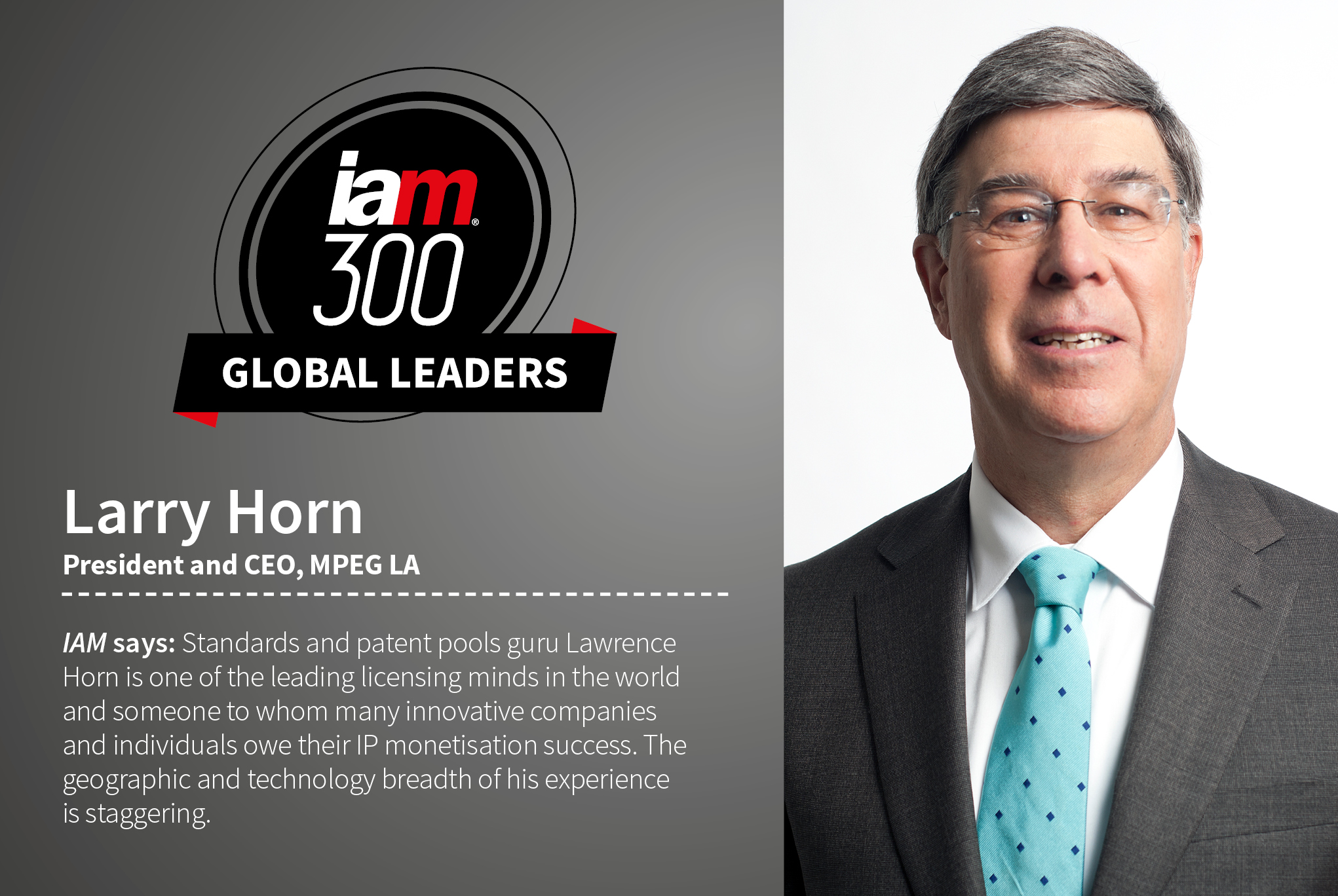 Since its formation almost 25 years ago MPEG LA has transformed the licensing landscape. What has been the secret to your success in leading such a groundbreaking venture?

Since MPEG LA pioneered modern-day patent pools, we have seen efforts to re-enact historic results without underlying values confuse the reasons for their creation and success. Patent pools were designed to address the challenges of many-to-many (licensors/licensees) markets. Their purpose was to provide interoperability with reasonable access to important technology. The solution was a convenient pro-competitive alternative to bilateral licences offering freedom to operate and predictability. While necessary for economic feasibility, revenue generation was a by-product. A patent pool established for the purpose of revenue generation that does not solve a market problem will do neither. MPEG LA introduced the following features, which have become part of the market’s vocabulary:

Can you tell us about some of the biggest obstacles that you have faced in your professional life – and how you have overcome them?

I have found that doing things I like, trusting my instincts and learning by doing are key to job satisfaction and success. I liked fixing broken businesses, starting new ones, writing and technology, and have discovered that there is a place for generalists and problem solvers. Things did not always work out, but I stuck with it. Business is among the most honourable, ethical and intellectually challenging of pursuits. It does good by doing well. There is no better validation of a product’s value than the fact someone is willing to pay for it.

MPEG LA faced numerous obstacles to its MPEG-2 pool start-up. First, the pool lacked some major patent holders. But a patent pool, especially one without precedent, rarely starts with all patent holders; it begins with an initial group and grows. We focused on the patent holders that we had and did not raise royalty rates when more were added. In some cases, we lowered them. Virtually all known patent holders were eventually included. Second, as a matter of fairness, it is MPEG LA’s policy that all licensors and their affiliates that sell products covered by a pool licence are licensees and pay the same royalties as others – and they do. Finally, the market doubted that non-licensor licensees would enter into the licence, but they did. It also doubted that licensors would enforce their patents, but MPEG LA proved them wrong.

What impact do you expect the UK Supreme Court’s decision in Unwired Planet and several other recent significant decisions in SEP cases to have on your clients’ assets and the wider licensing market?

Enforcement actions by MPEG LA patent holders blazed this trail with landmark decisions from MPEG-2 to present-day programmes. The referenced decisions confirm what we know and practised – the market determines whether a licence is FRAND. In 2019 the Dusseldorf District Court found that MPEG LA’s AVC licence was FRAND in light of the company’s worldwide licensing practice with more than 2,000 licensees and that the defendants were not entitled to obtain a licence limited to Germany (or other sub-sets) but must take a worldwide licence. In prior cases, the German Supreme Court found that video data that is the result of a video-compression process is protected as a direct product of that process and extends to every embodiment, including those resulting from duplication by mechanical moulding.

What are three big technological changes that you see coming down the pipeline – and how should rights holders prepare to face them?

Three big changes would be new biopharma business models embracing patent pools, AI to harness the promise of this powerful technology and determine who owns it, and cybersecurity because the future hinges on securing data ahead of those who would invade it. In addition, protecting innovation from the threat of efficient infringement to the incentives that fuel it begs for consideration of new, dynamic methods of IP disclosure and protection.

Larry Horn is president and CEO of MPEG LA, the world’s leading independent provider of one-stop licences for standards and other technology platforms. MPEG LA pioneered the modern-day patent pool, helping to produce the most widely used standards in consumer electronics history with transparent licensing solutions that provide access to important intellectual property, freedom to operate, reduced litigation risk and predictability. MPEG LA is expanding into other groundbreaking technologies including biotechnology and electric vehicles.