Several companies that shaped the latter half of the 20th century – particularly in the automotive, electrical and chemical industries – appear to be struggling to evolve and adapt to the modern marketplace. As society and lifestyles change rapidly thanks to advances in data communications technology, many brands are failing to keep pace by coming up with innovative products. If things continue in this manner, some household names may find themselves superseded by new products and services from new companies entering the market.

A prime example of this shift is the digital camera wave that started around the turn of the century and virtually eliminated conventional film cameras. In the latter half of the 1990s, Fujifilm had a market share of over 50% in a wide range of products linked closely to film, including cameras and film development and several peripheral markets related to the analogue camera market. In the early 2000s, CEO Shigetaka Komori realised that digitisation threatened to destroy this structure and sought to change the fields in which Fujifilm did business. One result of this was the company’s successful entry into the skincare industry through the utilisation of high-performance materials that had long been used in the photo-film business. This proved to be a canny manoeuvre, which steered the company out of existential peril.

Fujifilm’s experience stands in sharp contrast to that of its former competitors of the 1980s – Konica and Eastman Kodak – which were less successful in moving with the times. Eastman Kodak filed for Chapter 11 bankruptcy in 2012, delisted its shares from the stock market and was forced to sell off some of its patents and businesses. Its personalised imaging and document imaging businesses were acquired by a UK-based fund called Kodak Alaris, which retained the Kodak name. Meanwhile, Konica, the company credited with the world’s first 35mm built-in flash camera, merged with Minolta and shifted its focus to document solutions.

To examine how these three film companies differ, this article examines how their technology development efforts changed over time to provide insight into how the companies ended up where they are today and where they might be headed next. To do this, USPTO-granted patents belonging to each company have been collected and analysed using proprietary Big Data analytics technology Valuenex Radar. To create an unbiased and objective assessment, no filters, stop words or weight adjustments were applied to the datasets. Using this analysis, tens of thousands of patents can be grouped into clusters based on full text semantic similarities and precisely plotted on a single map, with the scale of distance accurately representing the difference between technological areas and contour lines carving out levels of filing density. In addition, trend lines have been added which trace the overall movement of a portfolio’s centre of gravity, mapping its past and present transitions and predicting its future direction. To keep things simple, the clusters have been removed, leaving the contour regions to clearly show the high and low density areas of each portfolio.

Konica’s change in direction after merging with Minolta

In its early days, R&D at Konica mainly focused on optics and lenses, specifically in areas such as light flux and objective lenses before moving into phosphor layers, scintillators, colorants and inkjet regions. After the 2003 merger with Minolta, Konica withdrew from the business of cameras and film in 2006 and its R&D took a 90-degree turn in the direction of multi-function printers, including electric paper, display images, image processing and related areas (see Figure 1). On closer inspection, there are under-examined areas at the interstices of three fields: fixing belts and other precision equipment, information devices and other electronics and lenses and other optics (see Figure 2). This could be considered as an area of white space where Konica Minolta could develop new opportunities from its own R&D and stockpile of patent assets. 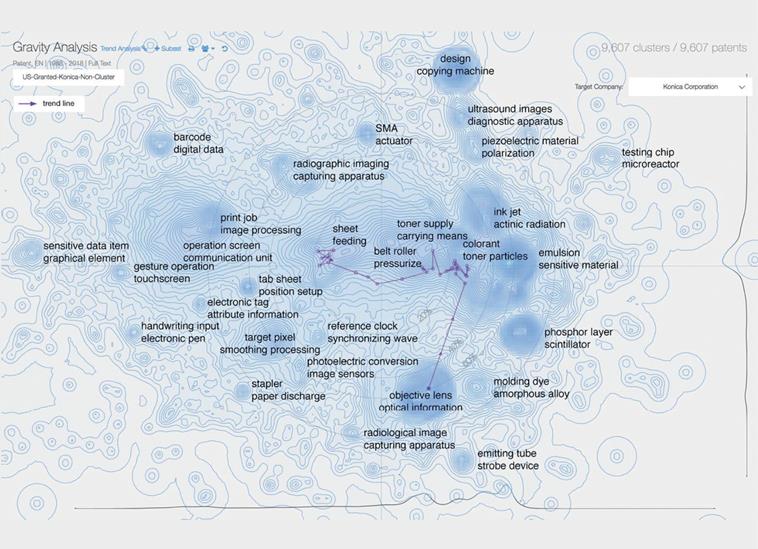 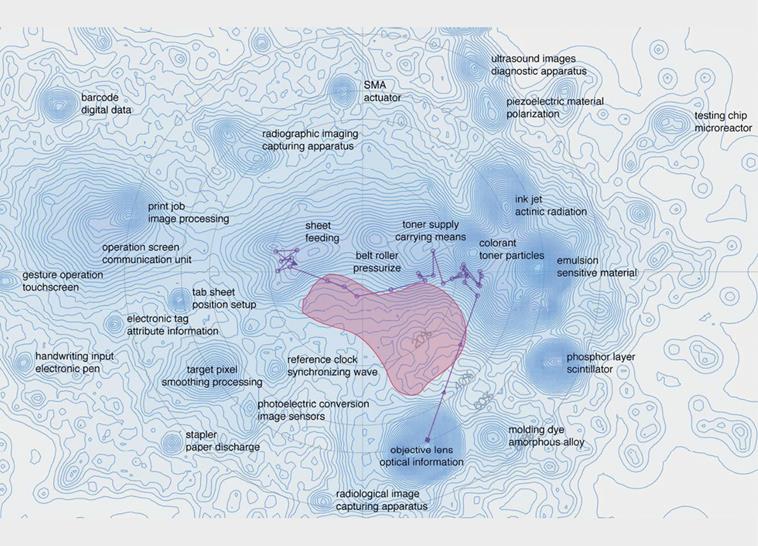 The halt of technological development at Kodak

At Kodak, R&D focused on the area of inkjets and related chemicals, as well as direct extensions from that area, but activities ground to a halt around 1999. On the periphery of this core research were technologies such as micro organic light emitting diodes (OLED), rare earths, phosphor storage and OLED displays (see Figure 3). Kodak registered around 21,000 patents in the United States, most of which have been sold since 2013 to newer and more powerful companies such as Apple, Google, Facebook, Amazon, Microsoft, Samsung, Adobe Systems, HTC and others; some of Kodak’s technology is also owned by non-practising entities. An overarching analysis of Kodak’s R&D reveals that its efforts were scattered across a variety of technological fields, often with no mutual connection. This made it relatively easy for the company to sell off its research in technology-specific buckets.

Ultimately, Kodak’s business shrank and it was sold to a UK-based fund, but the value of its brand and other intangible assets was enormous. Even if this development appeared to be a failure, it may have been a big success for the investors. 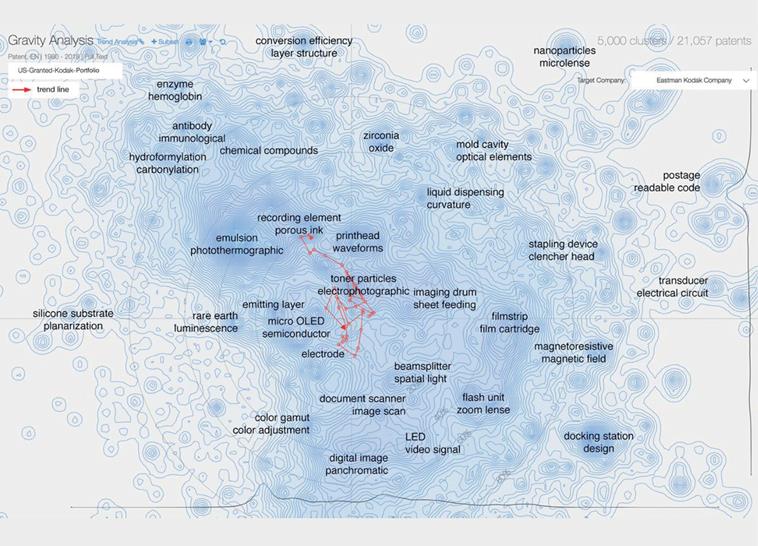 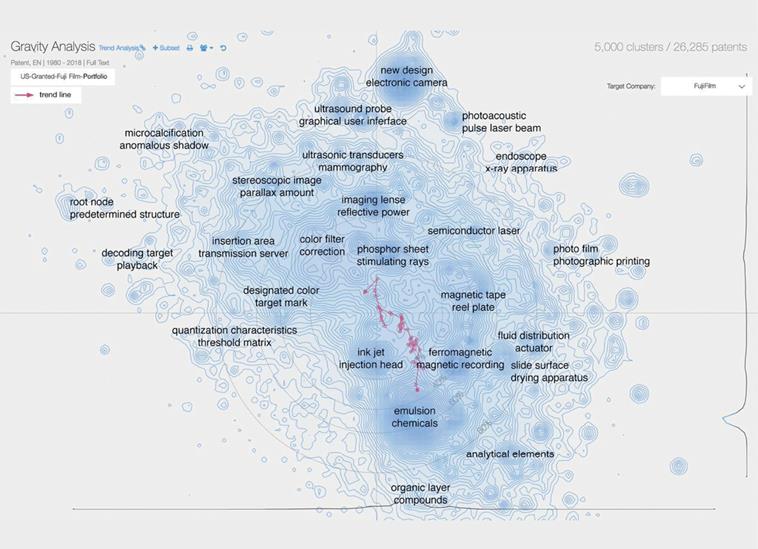 Fujifilm was reorganised as a holding company in 2006 and the company name – Fuji Photo Film Co – was abandoned in favour of the current name, Fujifilm Corp. Since then, the firm has remained consistent in its R&D efforts based on the straight direction of its trend line, with technological progress aligned to move core fields in the direction of future market opportunities (see Figure 4). In 2006 Fujifilm also entered the skincare market. With Fujifilm subsidiaries active in the areas of basic research and drug discovery as part of strategic efforts to dig deeper at times when core areas appear to be making little progress, ideas have arisen that have led to the leveraging of key technologies to create new products. This was the case when Fujifilm tapped into its key photographic film technologies to create original skincare products. As Fujifilm reviewed its photographic film technologies, the clearer the potential for developing an entirely new business became. Through rapid progress in R&D and the selection and aggregation of key ingredients from its 4,000-strong compounds portfolio, the company was able to develop several original formulations that have capitalised on the full potential of ingredients, including human-type nano-ceramide, nano-lycopene, nano-AMA, nano-oryzanol and nano-vitamin A. In just over a decade, Fujifilm has boldly entered a new market and built an extremely strong skincare brand, providing consumers with unique and scientifically backed products. This is a great example of how a company has leveraged its longstanding reputation as one specific type of company to succeed in an entirely new area. 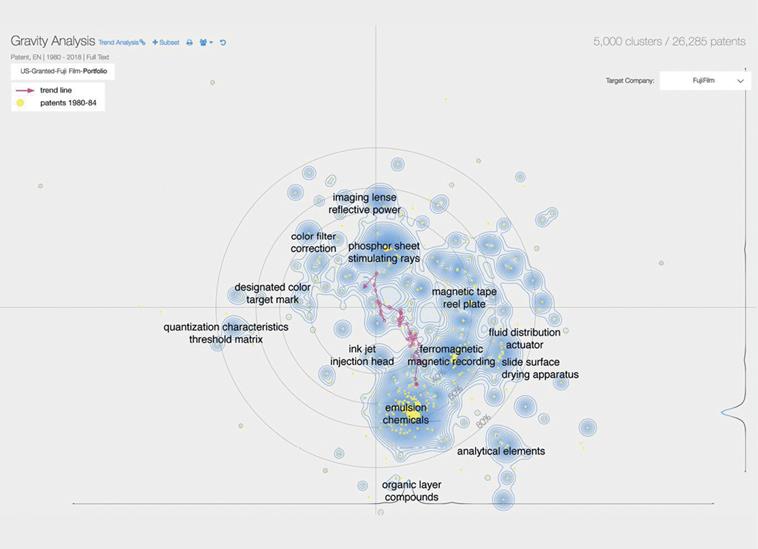 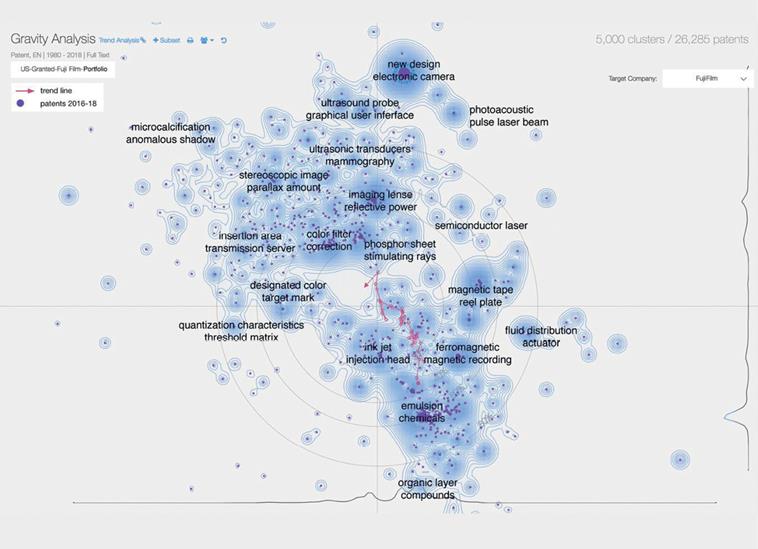 Viewed retrospectively, while there has been some back-and-forth over the decades, the consistency of Fujifilm’s R&D is striking. From a long-term perspective, the piece of the pie represented by each field of research has only changed incrementally over the years, which reflects the assuredness with which the company has been run. It is likely that the long-term leadership and forward-thinking of CEO Komori has been the main reason for the company’s success. However, the gap between the high-focus technology areas that Fujifilm has pursued in the past, such as emulsions and chemicals, and the areas that is has focused on more recently, such as imaging, has been widening over the years (see Figures 5 and 6). If this trend continues, there will be broad gaps in the company’s technology portfolio, which will make it more difficult for it to synergise its R&D efforts.

Mature companies often have underutilised technologies at their disposal. Some technologies are simply developed ahead of their time, while for others, potential applications extending beyond their original purpose are overlooked. A bird’s-eye view of the technologies owned by a company can be hugely beneficial. ‘Bird’s-eye view’ means looking at the overall picture, recognising the long-term evolutions of a company and thinking outside the box to realise new opportunities. This approach can provide insight by making various factors more obvious – for example, the relationships between disparate technologies, the direction of comprehensive R&D efforts, the competitive environment and even white spaces in a portfolio.

Breaking down barriers and taking a broad view

Fujifilm categorises healthcare as a form of information business and skincare – which is currently the most visible aspect of the change in Fujifilm’s business. By contextualising skincare within the broad framework formed by the three businesses of information, imaging and document solutions, Fujifilm has eliminated factors that might inhibit the expansion of its technology base.

This narrative stands in sharp contrast to the experience of consumer electronics companies that created revolutionary three-dimensional technologies, but held on too tightly to their television businesses, which meant that opportunities were overlooked (eg, in healthcare). Ultimately they were forced to give up their television businesses. As seen from the bird’s-eye view of Fujifilm’s technologies, for the past 20 years or more the company has placed no restrictions on the direction of business technology development – this may be the main reason behind the consistency in its core R&D efforts. It is conceivable that researchers may be perennially thinking about potential applications, even if no immediate business connection is clear.

Fujifilm’s success in transforming its business has been driven by the direction of its R&D efforts to create new products. Eastman Kodak was a global player rivalling Fujifilm, but when the digital train left the station, Kodak was left standing at the platform. In the end, the technologies it developed were sold on and the company vanished into thin air. Konica was another key name which ultimately merged with Minolta and left the camera business to take its R&D in a completely different direction. By contrast, Fujifilm has made steady, straight-line progress in its R&D. From early on, the company identified new opportunities in new fields. Its R&D programme has been stable and farsighted, enabling a rapid transformation from silver-halide film to skincare products. For mature companies with diverse R&D histories, it is useful to take a bird’s-eye view over a wide range and a long timespan to fully analyse existing technologies and identify opportunities in new fields.

Sam Kovach of Valuenex, Inc, Geneva, Switzerland, was a contributing author for this article