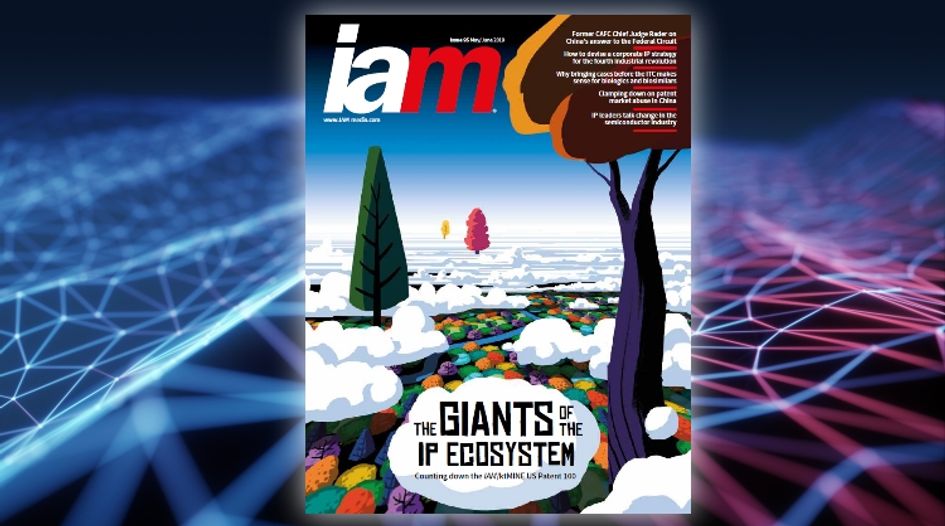 The new issue of IAM magazine has just been published and is now available to subscribers online.

The US patent system may have lost some of its lustre in recent years, thanks to uncertainty in areas such as patent-eligible subject matter, but there is no doubt that a US patent still holds considerable value to the world’s largest companies. The cover story in issue 95 revolves around the run-down of the annual IAM/ktMINE Patent 100, which reveals which entities own the 100 largest US portfolios.

While Samsung has kept its firm grip on the top spot, comfortably ahead of IBM, the big changes lie further down the rankings, where Microsoft appears increasingly likely to overtake Canon in third place, Google is cracking the top 10, China’s BOE makes its bow in the top 100 and car manufacturers continue their steady rise up the table.

Elsewhere in this issue Randall Rader takes us inside the launch of China’s new National Appellate IP Court. As the former chief judge of the Court of Appeals for the Federal Circuit, Rader’s take on the establishment of what is being dubbed the Chinese version of the CAFC makes for fascinating reading.

The launch of the court is another reason why China’s IP market is becoming increasingly important for rights holders around the world and we keep our focus on the country in two other articles in this issue. Our Asia editor Jacob Schindler takes a close look at patent abuse in China and details what authorities there are doing to address what can, at times, look a little like an IP Wild West (or should that be East?). Elsewhere, life sciences reporter Adam Houldsworth takes a deep dive into how China’s changing patent landscape is affecting the pharmaceutical industry.

While semiconductor companies make up almost one-fifth of the *IAM*/ktMINE Patent 100, analysis shows that the actual number of chip patents granted in the United States last year dropped by a little over 7%. In a sector that is facing up to some seismic changes Richard Lloyd examines how IP strategy is continuing to evolve for a range of players in the industry.

Be sure to take a look, too, at Robert Moore’s view on how the latest dispute to reach the US courts shows that evolution of litigation strategy around FRAND licensing. And check out some in-depth analysis from Vincent Violago and Nikko Quevada of the recent patentable subject-matter guidance released by the USPTO at the start of the year.

Keeping the focus on the US market, DLA Piper’s Tony Pezzano and Michael Dougherty explain why bringing cases at the International Trade Commission increasingly makes sense for owners of biologics patents. While last, but by no means least, Santosh Mohanty, Shekhar Guha and Parthapratim Indra provide a fascinating insight into how Tata Consultancy Services is ensuring that its IP strategy is ready for the fourth industrial revolution.