In the wake of the smartphone patent wars, several lawsuits in Germany – the centre of gravity for infringement actions in Europe – are revolving around the conditions under which an infringer of standard-essential patents (SEPs) may have a competition law defence when previous licensing negotiations on fair, reasonable and non-discriminatory (FRAND) terms have ended unsuccessfully. Since the German Federal Court of Justice and the European Commission hold different views in this respect, the Dusseldorf Regional Court referred five questions to the European Court of Justice (ECJ) for clarification. On July 16 2015, in Huawei v ZTE (C-170/13), the ECJ addressed these questions and set the framework for the admissibility of FRAND defences in SEP infringement cases.

Although a patent confers exclusive rights on its holder, its enforcement does not per se constitute abuse of a dominant position contrary to Article 102 of the Treaty on the Functioning of the European Union, and therefore does not usually interfere with EU competition law. However, if a patent is essential to a standard, its use is indispensable to all competitors manufacturing products that comply with this standard. Hence, holders of SEPs usually have a dominant position, which might be abused in a manner that is detrimental to free competition in the internal market.

Therefore, to balance the need for standardisation for public use in a technical field with the rights of SEP holders, standard-setting organisations require SEP holders to give an irrevocable undertaking that they are prepared to grant licences on FRAND terms to their SEPs.

Injunctions based on SEPs

The 2009 Federal Court of Justice decision in Orange Book v European Commission held that a defence based on competition law may be relied on by an alleged patent infringer to prevent the grant of an injunction. However, the court restricted this defence to exceptional cases. The court defined two conditions for the assessment of abuse of a dominant position by a plaintiff seeking an injunction – namely, where the alleged infringer:

The court placed the burden of proving fulfilment of these conditions on the defendant. In practice, a number of lower German courts applied the Federal Court of Justice decision so as to require defendants to waive all non-infringement and invalidity defences, rendering it unattractive for alleged infringers.

Huawei v ZTE was referred to the ECJ by the Dusseldorf Regional Court, which was hearing a patent dispute between Chinese companies Huawei Technologies and ZTE Corp.

Huawei was granted a patent in the telecommunications sector for Germany on the basis of a European patent (EP 2 090 050 B 1). Huawei notified the European Telecommunications Standards Institute that this patent was essential to the long-term evolution (LTE) standard – which encompasses more than 4,700 patents – and undertook to grant licences to third parties on FRAND terms.

Huawei brought an action for infringement before the Dusseldorf Regional Court against ZTE, which marketed telecommunication products in Germany that operated on the LTE basis (and thus made use of Huawei’s patent) without paying any royalties.

Before the action, Huawei and ZTE had engaged in discussions concerning the infringement and the possibility of concluding a licence on FRAND terms. However, no agreement had been reached.

The Dusseldorf Regional Court found that applying the Orange Book standard to the dispute between Huawei and ZTE would lead it to grant the requested injunction; however, following the European Commission’s approach might lead to the dismissal of Huawei’s action for an injunction, based on the competition law defence under Article 102 of the Treaty on the Functioning of the European Union (depending on what was considered sufficient to be a ‘willing licensee’).

Hence, the Dusseldorf Regional Court referred several questions to the ECJ to clarify the circumstances under which an undertaking in a dominant position abuses that position by bringing an action for infringement.

In November 2014 the advocate general issued his opinion in the ECJ proceedings and concluded that before seeking an injunction, an SEP holder must alert the infringer to the infringement and provide a written licence offer on FRAND terms. The ECJ essentially followed the advocate general’s opinion, but was more specific in its judgment (as expected).

The distinction here is that actions seeking a rendering of accounts and award of damages have no direct impact on standard-compliant products manufactured by competitors appearing or remaining on the market.

The ECJ held that an SEP holder that has given a FRAND declaration to a standardisation body does not abuse its dominant position by bringing an action for infringement seeking an injunction or the recall of products, provided that:

The ECJ held that an alleged infringer which has not accepted the offer made by an SEP holder may invoke the abusive nature of an action for a prohibitory injunction or for the recall of products only if it has submitted to the SEP holder, promptly and in writing, a specific counteroffer on FRAND terms. 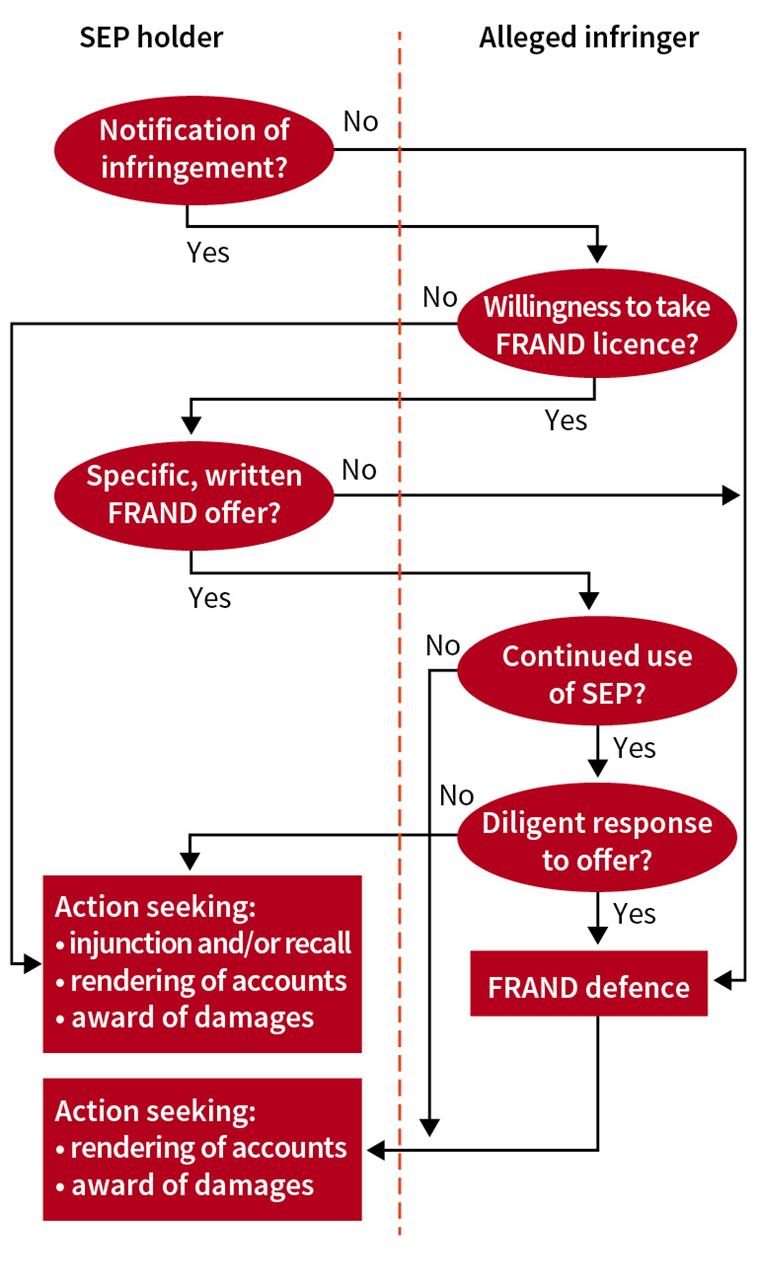 The ECJ held that in circumstances such as those in the main proceedings, the prohibition of abuse of a dominant position does not prevent an SEP holder that is in a dominant position, and that has given an undertaking to the relevant standardisation body to grant licences on FRAND terms, from bringing an action against an alleged infringer seeking rendering of accounts for past use of that SEP or an award of damages for that use. Figure 1 illustrates the procedural framework set by the ECJ.

SEP holders cannot seek an injunction against a willing licensee which has committed to license the technology on FRAND terms unless specific requirements are fulfilled – specifically, that it has not made an initial FRAND licence offer. The decision limits the possibility of using the threat of an injunction against the user of a standardised technology if that user is prepared to take a licence under a valid patent which it actually uses.

However, requirements are also imposed on SEP users, which must take specific steps before being able to argue that an injunction is abusive. Specifically, the SEP user must present its own FRAND counteroffer. It seems that a declaration to be bound by a FRAND rate set by a court or arbitrator (which renders an SEP user a ‘willing licensee’ under European Commission decisions) would have to follow the specific steps set out by the judgment (ie, the SEP user presenting a counteroffer following the SEP holder’s offer).

The decision basically applies the European Commission’s safe harbour concept with further restrictions on the behaviour of the alleged infringer in responding to FRAND offers from the SEP holder.

Ultimately, it seems to be a good compromise between the Federal Court of Justice’s Orange Book decision and the European Commission’s Samsung and Motorola decisions.

Although the ECJ’s framework requires the SEP holder to present a FRAND offer to the SEP user, specifying the royalty and calculation method, it does not define the FRAND terms. However, the judgment suggests that FRAND is a negotiable concept and that two different offers can both be FRAND. Accordingly, although the decision is clear and detailed regarding the procedural framework for obtaining an injunction for SEPs, it leaves questions open and thereby shifts the spotlight onto other aspects of the disputes in SEP infringement cases pending before national courts in Germany. According to a prominent Dusseldorf judge, ‘fair and reasonable’ should be interpreted as ‘non-exploitative’ rather than ‘low priced’. The same judge added that, given the complexity of SEP cases and the timeframe of the proceedings, questions of whether an offer is FRAND will most likely be decided in a summary manner, using a rule of thumb rather than exact science.

It is obvious that the ECJ’s established framework will significantly rebalance German SEP litigation and shift the burden of proof. So far, Germany has been a forum of choice for patent litigation in Europe. German courts have historically been generous in granting injunctions for patent infringements, taking the view that competition law defences generally do not impede injunctions, even if the litigation concerns SEPs. Consequently, when trying to invoke a competition law defence, the burden of proof mainly rested with the defendants. Under the ECJ’s framework, an SEP holder seeking injunctive relief will be obliged to prove that it approached the infringer and offered an agreement on FRAND terms. This suggests that the admissibility of an SEP holder’s claim for injunction depends on the SEP offer’s compliance with FRAND terms – terms which, however, are undefined and most likely disputed between the parties. Hence, if the defendant contests the FRAND assertion (eg, on the basis of its own FRAND royalty calculation), the court will have to appoint an expert to resolve this issue. However, this would considerably delay the proceedings, leaving the SEP holder without injunction in the meantime. Obviously, this is a procedural dilemma which seems to corroborate the application of the above summary manner approach. In any case, it will be interesting to see how the German courts implement the ECJ’s guidelines in practice.

From a global perspective, the judgment once again emphasises the driving role of EU competition law in the technology sector – indeed, in all sectors where intellectual property plays an important role. Interestingly in this respect, no European companies were involved in the case. Selecting Europe as the forum for a patent dispute between global players is not singular – Sun and Real Networks fought with Microsoft in Brussels over 15 years ago. However, the fact that a key EU decision has been triggered not by US but by Chinese companies for the first time is perhaps a sign of changes in the global economy.

Although the ECJ has established a procedural framework, it is up to the national courts of EU member states to implement the ECJ’s guidelines and resolve the questions that the ECJ decision left open.

The following lists some of these questions which have now been addressed by the Dusseldorf Regional Court in two decisions in Sisvel v Haier and the Mannheim Regional Court in Saint Lawrence Communications v Deutsche Telekom:

Hence, both for SEP holders seeking to enforce their rights in Europe and for SEP users potentially facing actions for injunctive relief in Europe, it is paramount to review these decisions carefully and observe further developments in order to understand the application of the Huawei v ZTE principles by the German courts. 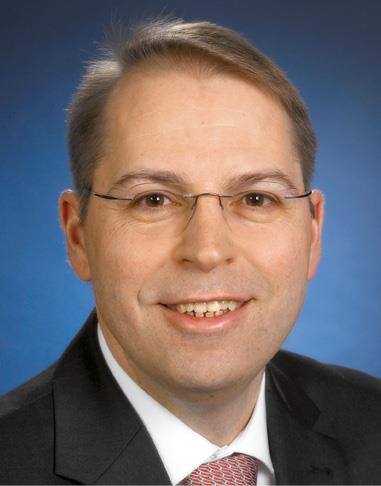 Rainer K Kuhnen is a partner with renowned IP law firm KUHNEN & WACKER. As a German and European patent attorney, he specialises in patent prosecution and opposition as well as nullity and infringement proceedings, especially in the fields of electrical engineering, electronics and physics. Mr Kuhnen holds a master’s in electrical engineering and an LLM in European IP law.

He frequently lectures on German and European patent practice and has given presentations and seminars in the United States, Canada, Japan, Korea and China. He belongs to numerous national and international IP organisations, including the European Patent Litigators Association, the International Association for the Protection of Intellectual Property, the Licensing Executives Society and the American Intellectual Property Law Association.