Herding catfish? Time to cast a wider net over the aquaculture market

As the global population continues to rise and traditional food sources come under threat from climate change, natural disasters and genetic depletion, the need to develop and secure alternative food sources has never been greater.

Aquaculture – the farming of fish and other aquatic species – is becoming increasingly important in providing an alternative source of food. The sector provides not only human food, but also animal food and soil fertiliser. Today, aquaculture now accounts for nearly 50% of the world's fish eaten as food and, according to the Food and Agriculture Organisation of the United Nations, is the fastest-growing sector of the world food economy. It is therefore unsurprising that considerable time, ingenuity and investment have been devoted to this sector.

Technology has been crucial in yielding not just fish and other aquatic species, but also IP rights. An analysis of the sector since 2000 shows a marked increase in overall portfolio growth, in both the number of granted applications and pending applications.

Two main technology areas dominate. The largest – which accounts for around 90% of the sector – relates to aquaculture equipment such as fish pens, tanks, filtering systems and feeding apparatus. The remaining 10% are biological advances relating to disease eradication, genetics and breeding techniques. 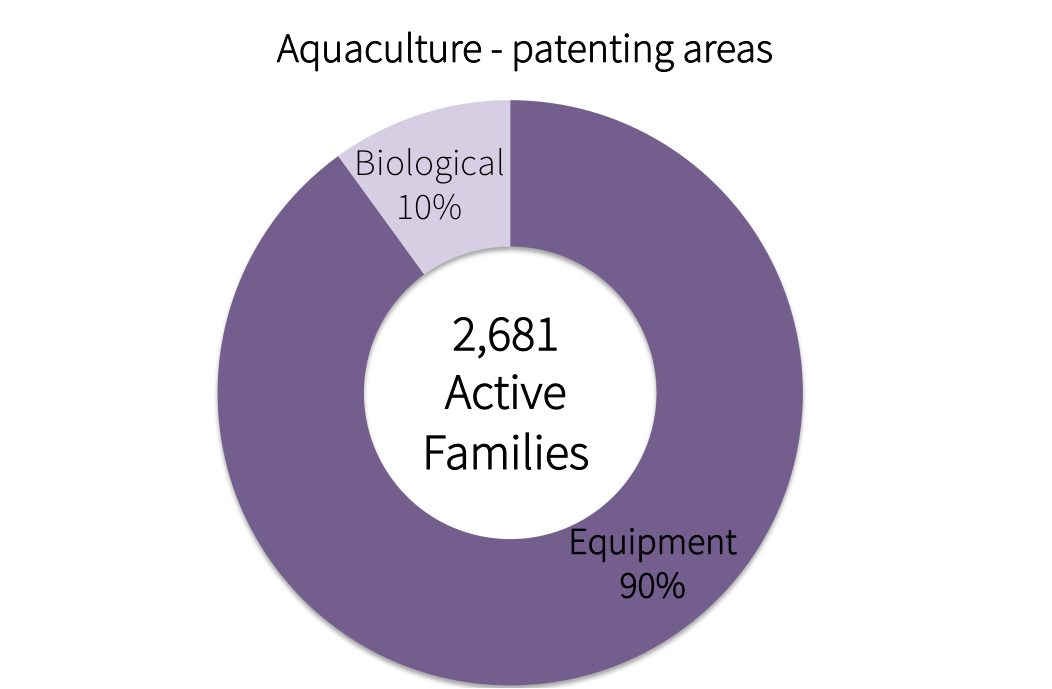 Where do these patents originate? They might be expected to originate from leading commercial operators in the patent-conscious United States and Europe, which are also high-consumption economic powerhouses and among the largest importers of aquatic food. However, this is not the case. The table below shows that almost all patent applications in the field now emanate from China, with South Korea, the United States and Norway trailing by so great a distance as to be almost negligible. Further, a study of the patent holdings of the Global Aquaculture Alliance – which promotes responsible aquafarming and represents the interests of leading trading companies, aquaculture research institutes and local trade bodies – shows that, out of its 181-strong membership, less than one-fifth hold patent families relating to aquaculture, with on average only two pending or granted families each. 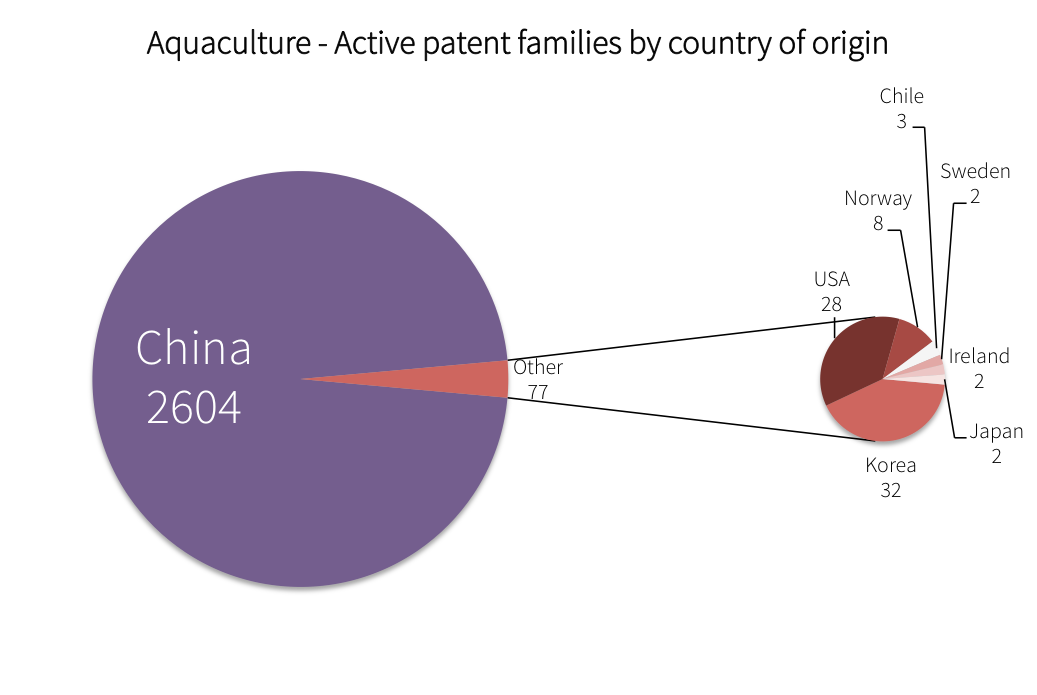 The history of aquaculture may provide some explanation of China’s dominance in aquaculture patenting. Aquaculture has a long history in China, dating back 4,000 years to the farming of the common carp, shortly followed by the introduction of carp polyculture. China’s interest in aquaculture has continued to the present day and now involves a much wider range of fish and other aquatic organisms, such as oysters and edible seaweed.

China’s commitment to the development of aquafarming is focused principally on just four institutions:

Less than 1% of these patent families were filed outside China. At first glance, this would appear to suggest a lack of interest in protection outside the home jurisdiction and a preoccupation with a growing domestic market, rather than the development of global or international portfolios which would support licensing and other commercial activities abroad.

However, there may be other explanations for the discrepancy, if not its magnitude. Some innovations may relate to breeding techniques that would struggle to satisfy patentability criteria outside China; others may relate to eradication techniques for diseases not found in other geographical regions; still others may not be worth patenting in jurisdictions where local health and hygiene regulations would prevent their use (eg, where they involve the administration of steroids or products with toxicological indications).

What about outside of China? Korea, with its abundant fisheries, has historically always been a consumer of aquatic products. Korea has turned to aquaculture in recent years to meet growing demand for seafood and is one of the larger patent-owning nations in this sector. As seen in China, filings predominantly stem from public-sector research organisations and universities. The United States similarly has a growing domestic market for aquatic products and investment in aquaculture is on the increase. Norway, in fourth position, is one of the world's largest producers of farmed salmon. The United States and Norway have filings from research institutes and universities as well as commercial operators.

What conclusions can be drawn from this exercise? It is hard to get a good sense of the presence of truly dominant players outside China, the entry of disruptive technologies or the development of global or international marketing strategies. This may make the sector ripe for consolidation and for casting the investment and innovation net more widely, especially as it moves towards greater sustainability and an improved environmental footprint. Lastly, with its long history in the development of aquaculture, China has the opportunity to be an international leader in this sector, should it choose to look outwards.