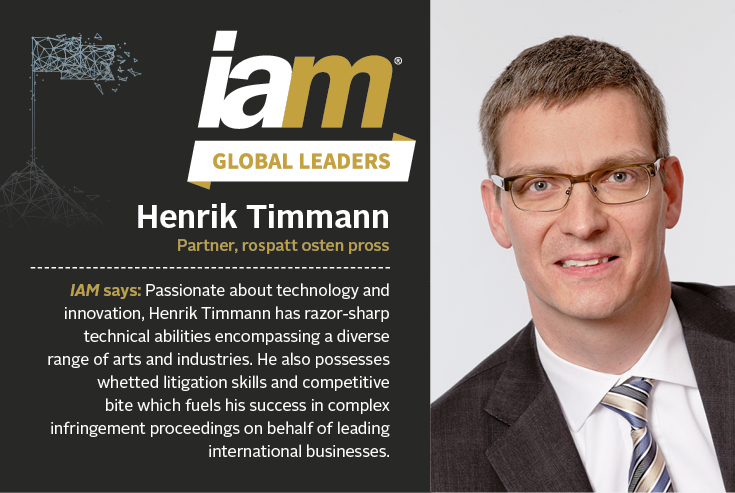 What led you to choose a career in IP law?

When I finished school, I considered studying either chemistry or law at university. At that time, law seemed more attractive for various reasons. After I had graduated from law school I discovered that it was possible to combine both aspects – the legal and the scientific – into one career. That was when I discovered my passion for patent law.

You do a lot of work with companies from Asia, the United States and Europe. What do you see as the major differences between their approaches to resolving disputes?

European companies are very much dedicated to efficiency. They try to keep disputes streamlined and focused on individual conflicts. Asia and US-based companies are more used to large and complex disputes, which are fought vigorously and consume more attention from the lawyers and the courts.

What are the key skills that patent litigators in Germany need to possess?

Top patent litigators must be creative and spontaneous on the spot. A litigator that relies solely on their prepared pleadings has lost in a German courtroom. Further, they need to be a good intermediary between the legal and technical considerations, which requires an educated understanding and long-term experience of the two worlds. I have also seen that the skill of proper claim interpretation is the key to success in infringement and validity proceedings – a skill that requires not only knowledge of the technical background, but also a good sense of judgement.

Germany’s bifurcated patent system is often a cause for concern to foreign companies. Are they right to be worried?

What do you see as the key issues in German patent law right now?

Many lower-court decisions are concerned with implementing the Huawei v ZTE decision, in particular the specific requirements for SEP holders and licence seekers in the context of FRAND terms. The Federal Supreme Court is eagerly awaiting an opportunity to provide more clarity on these aspects.

Another hot topic with a number of spectacular Federal Supreme Court decisions is the doctrine of equivalence, its prerequisites and the resulting scope of protection.

A third major concern of the German judicature is the harmonisation with the principles of EPO case law in validity cases.

Henrik Timmann has 20 years’ experience working in IP law, particularly patent disputes. His practice covers all areas of technology, including mobile telecoms (2G through 5G), chemistry, pharmaceuticals, network technology and audio and video processing. His clients are based in Europe, Asia and the United States. Mr Timmann is joint editor and co-author of Handbuch des Patentrechts and the English counterpart Patent Law: A Handbook. He regularly lectures on IP-related topics.