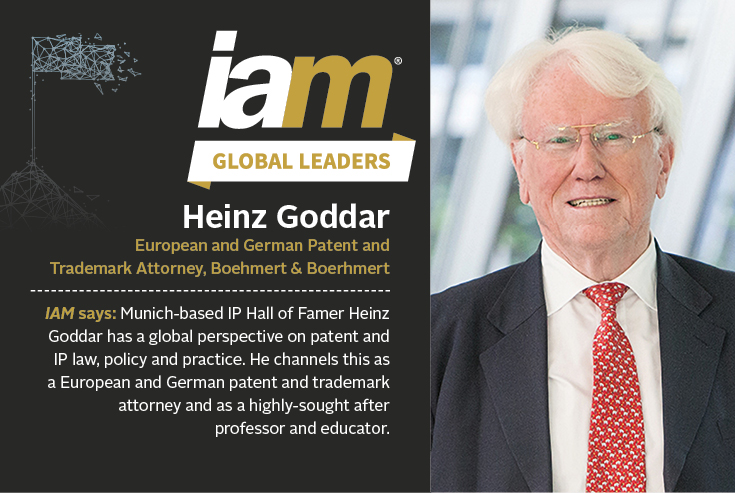 What led you to choose a career in intellectual property?

I studied law alongside physics because I wanted to use my skills in physics as a patent attorney. Further, when working on my PhD dissertation in polymer physics at the University of Mainz, I deepened my studies in law and finally decided that my interest was not so much in research, but rather in how to use legal instruments to promote and share technical innovations.

The ‘friendly side’ of IP rights is interesting – in particular, sharing innovations with others through licensing. Therefore, the most rewarding part of my work as a patent attorney relates to technology licensing. However, my work as a professor of IP law, particularly patent law, is also very rewarding. One of my greatest achievements was as past-president of LES International (LESI) and chair of the LESI membership committee when I participated in the foundation of LES Chinese Taipei, with the prior approval of LES China, which I also helped found in 1986. Since then, both LES China, with a Hong Kong sub-committee, and LES Chinese Taipei have continued to develop fruitful, cross-border cooperations in the framework of Greater China.

For about two decades patents have stopped being used to primarily protect innovations against unauthorised use by others and instead, big portfolios of patents are being created to serve as currency in international trade. Portfolio creation means a lot more drafting and prosecution work than in the age of single product/single patent. As such, I had to transform my firm into an institution that could manage intellectual property in large volumes, while at the same time maintaining the quality of our work. An interesting observation so far has been that portfolio building is particularly important in information and communications technology, but the single product/single patent-world continues to exist in biotechnology and pharmaceuticals in particular. Therefore, our IT personnel has increased dramatically. Further, negotiating licence agreements – often in the form of cross-licensing arrangements – in order to obtain and maintain freedom to operate has become a major part of my personal work. This is particularly relevant to my work with SEPs, where I am trying to contribute to the most recent developments in Europe, particularly Germany, as much as possible.

You are a prominent member of LESI and LES Germany. What have you learned from your involvement?

I have learned at LESI and LES Germany that, if you consider the Trade-Related Aspects of Intellectual Property Agreement (TRIPs), the importance of soliciting investments into innovations has remained unchanged or has even increased. However, the aspects that are covered, for example, by Article 7 of TRIPs – namely, to use IP rights for sharing innovations – has increased dramatically.

You do a lot of licensing and technology transfer work – what do you see as the keys to successful deal making?

To succeed in deal making in licensing and technology transfer, it is extremely important to behave in a trustworthy manner. It is also important to always try to create a win-win situation for both the giver and the demander. In deal making it is becoming increasingly important to get more than two parties (ie, merely a licensor and a licensee) at the table. Instead, much more sophisticated multilateral arrangements are becoming necessary. This all has a lot to do with SEPs and the specific problems related thereto, such as pool building and giving permanent attention to the dynamic development of the contributions of already existing members of a pool, particularly founding members, as well as creating smooth access for newcomers.

What do you believe are the main qualities top-ranked IP transactions lawyers should possess?

Psychological skills, to read, understand and respect the opinions of counterparts, as well as deep knowledge of the technology involved and language and communication skills. Needless to say, beyond their knowledge of technology, they should also have solid legal skills because many IP transactions are defined by the parties’ interest in avoiding legal disputes and resolve any conflict.

How would you characterise the current state of play in the IP transactions market?

Too little attention is given to the quality of intellectual property in the IP transactions market and too much weight is given to numbers. It would be great if patent offices could establish tools to inform the public of the essential character of self-declared SEPs. This would enable newcomers, in particular, to contact owners of self-declared SEPs and pools early on in order to reach a fair contribution and gain access to the pool under fair conditions.

You have done a lot of work internationally, what have you learned from that?

While there are distinct differences in the behaviour of players coming from different nations, some members or individuals from certain countries react rather similarly (eg, in Japan and Germany). Further, the approach of experts and parties that come from, and are embedded, for example, in the US legal system generally act in a distinctly more legalistic and dispute-prepared manner than those from continental Europe and, particularly, Asia.

If you could make one change to the current patent regime in Germany or Europe, what would it be and why?

It might be time to improve access to technologies otherwise blocked by patents, whether by mandatory licence of right declarations of SEP owners or by de-blocking provisions giving creators of important improvements of patented technologies legal title and the right to request cross-licensing with originators.

How do you expect the European patent environment to evolve over the coming years?

I am deeply sceptical about the pending EU patent package system. It is possible that there might be a return to the old idea of a community patent for larger geographical areas (eg, the European Union). I am also sceptical about the proposals for unitary patents and the UPC. The latter system in particular is much too complicated and expensive, particularly for small and medium-sized enterprises. Time will tell what happens to the current EU patent package after Brexit. I believe (and I could be wrong) that the German Constitutional Court will need another two to three years to decide whether, and in which form, Germany will revise the ratification process concerning the EU patent package. It is possible –  and for some scholars probable – that the Constitutional Court will shift the pending complaint to the European Court of Justice (ECJ), with the aim of getting a comment from that court of supremacy in the EU package system, particularly if the United Kingdom does not want the ECJ to continue to have the final word in the UK patent system.

Heinz Goddar is a partner at Boehmert & Boehmert’s Munich office and a German patent attorney and European patent and trademark attorney. He teaches IP law as an honorary professor and lecturer at several universities in Germany and abroad. He is past-president and gold medallist of the Licensing Executives Society (LES) International (LESI), past-president of LES Germany and a member of IAM’s IP Hall of Fame and the Standing Advisory committee before the EPO.