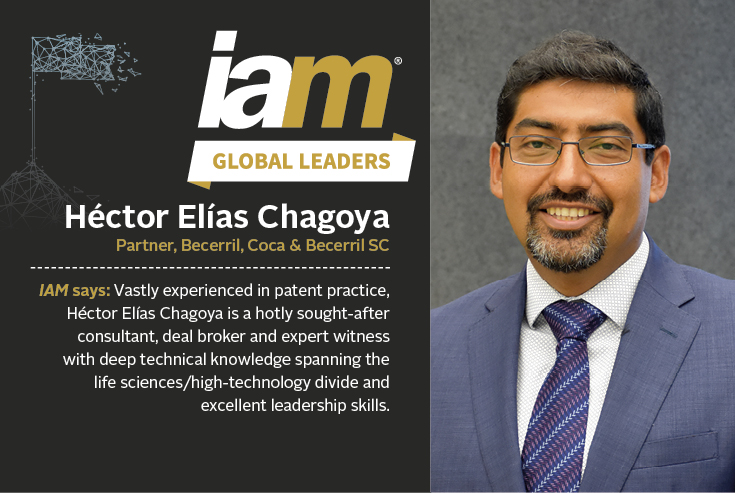 What was it that attracted you to a career in intellectual property?

I had the opportunity to start a career as a technical assistant in one of the best IP firms in Mexico 22 years ago. At the beginning it was just about gaining experience and curiosity about a world that had previously been hidden from me. As I gained experience and knowledge about patents by searching, analysing and drafting I decided that it was a great professional opportunity because very few firms and persons in Mexico were knowledgeable about patents. In addition, I was lucky enough to gain this experience in a leading firm. As I began to understand patent rights, I was most attracted to the idea of introducing a tool to empower Mexican innovators. In a country like Mexico, where resources for innovation are scarce, IP rights have the power to make the most of the few resources that are allocated to innovation activities. Unfortunately, this is still a cultural change journey.

On the strategic IP side, I helped a medium-sized Mexican company in its first licence-in from a US university. There were many challenges because the Mexican company had no experience in patents or licensing. Therefore, negotiations were difficult and there was a lot to explain to all of the stakeholders. The project was not going well for a variety of reasons. However, my intervention at the start of the negotiation ultimately saved the client in the settlement to terminate its contract with the university three years later, despite the university leadership’s reluctance to settle. For a medium-sized Mexican company this was significant and I am glad that I contributed to help saving such resources. This case encouraged the Mexican company to continue investing and licensing and it is now much bigger in size and has its own IP and out-licensing agreements based on good IP management and strategy.

What elements of the Mexican patent system are the most important for foreign rights owners to understand?

There are several issues in the Mexican patent system that depend on the sector, such as eligibility or certain criteria for prosecution. However, the most important feature may be the administrative nature of litigation for infringement and validity actions, and the minimum statutory damages rated at 40% of the net selling price to the public (even higher than gross sales). Litigation in Mexico first requires an administrative procedure before the Mexican Institute of Industrial Property, which has two further instances of appeal. A definitive decision must be issued at the last instance of appeal before the civil action for claiming damages can start, with another two instances of appeal. This is a lengthy procedure but it typically leads to early settlements.

You do a lot of licensing and technology transfer work – which areas are driving IP transactions in Mexico?

Industry-university transactions are driving new business in licensing due to the government’s promotion of technology transfer offices in universities and public research and development. Since 2006, the number of patents by Mexican applicants went from an average of 600 to 1,555 in 2018 with steady annual growth. This growth has started to build a critical mass of patents available in the market and of course such availability is driving an improvement in the market dynamics for licensing. The quality of the intellectual property is still developing and questionable, but the trends seem to be heading in the right direction if the new government keeps promoting these kinds of initiative.

What do you see as the key to successful deal making?

The key to successful deal making involves preparing all of the facts, including patent due diligence, to identify the opportunities and interests of both parties, with a long-range vision and clear measurement of the performance of the parties under the agreement in order to allow good management once the deal is closed. In other words, the deal should be seen as a continual effort after the signature of the agreement. All of the activities before the signature of an agreement are only a setup, and the real deal occurs when the parties are performing under the agreement. Thinking that deal making ends with the signature of an agreement is equivalent to thinking that marriage is just about the party and the honeymoon.

What are the main qualities top-ranked IP transactions lawyers should possess?

If you could make one change to the Mexican patent regime what would it be?

I would change the structure of infringement actions, making them shorter and more effective by allowing the study of damages along with the infringement actions at a civil judge level. Although it might seem that the quality of the decisions should be high if the patent office is involved in the determination of infringement, the whole administrative procedure plus the administrative instance of appeal makes it a lengthy process and often the parties must carry tax and financial risks for too long even if the other party is no longer interested in the case.

How practical an option is trade secrets protection in Mexico?

Trade secrets protection in Mexico is as effective as elsewhere for protection in the context of the typical decisions to make in any project, including the need to disclose the information and the easiness of reverse engineering, except that enforcement requires criminal actions to be brought. However, trade secrets law is expected to change dramatically if the United States-Mexico-Canada Agreement (USMCA) enters into force because one of the obligations is to have civil remedies available for trade secret enforcement. Also, as in other jurisdictions, the possibility of enforcing a trade secret depends greatly on:

In your experience, what are the key elements of a successful corporate IP strategy?

The key elements of a successful corporate IP strategy are, without any doubt, the alignment of the IP strategy, management and decision making with the general corporate strategy and particularly with the innovation component of the general corporate strategy. The most successful corporations in IP management are those that have intellectual property as an integral part of the general strategy and follow basic but powerful practices, from documenting what they are doing to ensuring freedom-to-operate. Whenever the IP function becomes purely legal, the corporation’s ability to monetise or otherwise take advantage of the intellectual property is diminished and maintaining the intellectual property and making decisions relating to its management becomes costly and ineffective.

How do you expect the Mexican patent environment to develop over the next five years?

The obligations under the new commercial USMCA will fashion several changes to Mexico’s patent and trade secret environment. On the patents arena the main changes will relate to the adjustment in patent terms for delays by the patent authority. In terms of trade secrets, USMCA’s obligation for a civil alternative for the enforcement of trade secrets will require a full revamp of the Mexican trade secrets law and practice.

Further, the Mexican Institute of Industrial Property is pushing for the adoption of information technology for patent prosecution and litigation, and we have already encountered challenges relating to the fact that prosecution notifications are no longer delivered personally to applicants but through publication in the Official Gazette. Further challenges like this are expected to come soon.

In addition, with a new government in Mexico, there are changes to the public policy affecting patents, including pharmaceutical technologies eligibility and protection, which includes the obligation to implement data exclusivity and compensation for delays in the regulatory path under USMCA. The government is working on a new Industrial Property Law that may dramatically change several aspects of patent prosecution and enforcement but at this point we are still early in the process, which has been catalysed by USMCA but still has a long way to go.

Héctor Elías Chagoya is a chemical engineer from La Salle University. He was the first to be recognised as a Certified Licensing Professional® in Mexico. In addition, he is an expert from the National College of Chemical and Chemical Engineers where he specialises in the engineering economy. He is recognised in terms of patent matters in Mexico and abroad, as well as his technology practice and intangible assets valuation.