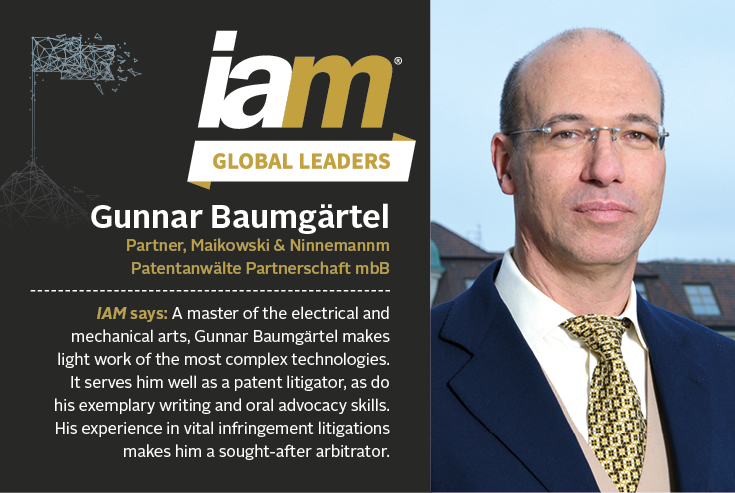 Why did you choose a career in intellectual property?

A career in intellectual property – and, in particular, prosecuting, defending and enforcing patents – offers a unique opportunity to combine my technological expertise with my profound legal knowledge against the background of economic considerations.

You were involved in an important case at the German Federal Court of Justice regarding the admissibility of post-grant amendments to claims. Can you outline why this was so significant?

The Winkelmesseinrichtung decision (ie, ‘angle encoder’), which was handed down by the Federal Court of Justice in 2010 (BGH GRUR 2011, 40), dealt with a difficult although not uncommon situation for patent owners: an amendment, which had been made during prosecution in order to narrow down the subject matter of an independent claim, was later found to have been inadmissible (this is usually due to a lack of disclosure in the original application as filed). However, the amendment could not simply be removed during post-grant proceedings (opposition or nullity) since Article 123(3) of the European Patent Convention and Section 22(1) of the German Patent Act stipulate that the scope of protection conveyed by a patent must not be extended after grant. According to the jurisdiction of the EPO Boards of Appeal, such amendments frequently lead to a patent’s revocation (the so-called ‘inescapable trap’). In its 2010 decision the Federal Court of Justice set out how patents can be saved in German post-grant proceedings, unless the amendment had introduced an aliud, which also teaches important lessons that must be applied in patent prosecution work.

What are the top qualities that clients should look for when seeking world-class patent advisers?

In Germany, clients should seek patent advisers who have broad experience and true proficiency in both patent prosecution and litigation. Germany is a hot spot for patent litigation in Europe. It is not unusual for patents providing protection in Germany to be litigated and they should therefore be drafted in anticipation of the challenges that could arise during both infringement and parallel nullity proceedings (which are handled by different courts under Germany’s bifurcated patent litigation system). In addition, patent attorneys – who typically work shoulder to shoulder with trial lawyers during infringement proceedings –    will play a key role in the (separate) nullity proceedings where the Federal Patent Court decides on the validity of the patent in suit and where the skills acquired through prosecution work are essential in defending or attacking the validity of the patent claims relevant to the case.

Patent matters regarding both prosecution and infringement are becoming increasingly intertwined with clients’ overall strategies and economic decisions. Consequently, it is of the utmost importance to:

Whereas, patent firms are traditionally centred on interaction with the relevant patent offices and courts, the focus must shift towards communication with clients and comprehensive, rapid reaction to their requests.

If you could make one change to the patent environment in Germany, what would it be?

Gunnar Baumgärtel studied physics in Berlin and Paris, obtaining a doctorate in computer-oriented solid state physics. He trained as a German and European patent attorney from 1994 until 1998 and holds an LLM in European IP law. He is involved in a significant number of high-profile patent litigation cases, predominantly in the telecoms, automotive industry, electronic and software fields. He also concentrates on patent prosecution work and licensing.