The objective of patent law is, on the one hand, to stimulate innovation in order to favour economic and technological development and social welfare. On the other hand, it is to establish the legal obligation of the patent owner to work its invention in exchange for an exclusive monopoly over the patented subject matter, preventing third parties from working it without the owner’s consent throughout the legal lifetime of the patent.

However, under exceptional conditions, and where certain requirements are met, the authorities may require that a patent owner grant a compulsory licence relative to the patent by granting a non-exclusive licence to a third party and allowing them to work the patent without the owner’s consent, in exchange for good and valuable consideration. For this reason, in such cases, the will of the parties is not a determining factor, as in voluntary contractual licences, but rather it is imposed by an administrative, judicial or government act, according to national laws.

The concept of compulsory licences for patents was provided under Article 5A of the Paris Convention for the Protection of Industrial Property, 20 March 1883, relative to the obligation to work. Article 5A grants member countries the right to take legislative measures providing for the grant of compulsory licences to prevent any abuse which resulting from the exercise of the exclusive rights conferred by the patent (eg, failure to work). In general, a compulsory licence may not be applied for based on the ground of a failure to work or insufficient working, before the expiry of a four-year period from the date of filing the patent application, or a three-year period from the date of the grant of the patent, whichever expires last. The compulsory licence will be non-exclusive.

The Paris Union Convention leaves its member countries the opportunity to recognise other situations for the grant of compulsory licences.

Within the framework of the Agreement on Trade-Related Aspects of Intellectual Property Rights (TRIPs), World Trade Organisation countries formalised a series of provisions applicable to compulsory licences, specifically regarding Article 31 which bears the heading ‘Other Use Without Authorisation of the Right Proprietor’. In regard to public health and the grant of compulsory licences for the export of generic drugs to countries with insufficient or no manufacturing capacities, it is important to bear in mind the provisions of Article 31bis of the TRIPs agreement introduced in the Doha Declaration of 2001, and namely, the mechanism of Paragraph 6 of the declaration, which establishes that a country may grant a compulsory patent licence so that it may be exported to another country where such a medicinal product is not protected but where there is also no capacity to manufacture it either.

On 30 August 2003, a waiver relative to the mechanism of Paragraph 6 was submitted by the European Union and its member states, as well as Australia, Canada, Iceland, Japan, New Zealand, Norway, Switzerland and the United States. In this regard, we are faced with the difficulty that may be found in developed countries, which, on many occasions, import active ingredients and medicinal products, as they do not have the capacity to manufacture many of them or to acquire them in the short term. Therefore, the grant of a compulsory licence by these developed countries would not solve the problem if they must import the active ingredient or medicinal product from a country where such items are protected by a patent and the owner does not authorise such imports.

Nevertheless, the Doha Declaration marks a considerable leap in relation to compulsory licences, as it establishes in Article 5.b that each member has the right to grant compulsory licences and the freedom to determine the grounds on which such licences are granted. Further, Article 5.c establishes that each member has the right to determine what constitutes a national emergency or other circumstances of extreme urgency.

Grant of compulsory licences according to national laws

In general, all national laws of the member states reflect the content of Article 5A of the Paris Convention and Articles 31 and 31bis of the TRIPs agreement, although some jurisdictions may vary with respect to specific procedural aspects and details for the grant of compulsory patent licensing (see Figure 1).

FIGURE 1. National authorities in a sample of countries

The provisions for granting compulsory licences have barely been applied and are configured as an exceptional mechanism relied on only in certain circumstances. Nevertheless, this concept has been incorporated in most European countries, although the grounds and the competent authorities for granting them, as well as the nature of the corresponding procedure, vary according to national laws (see Table 1).

The following can be found among the grounds that may be argued by EU member states for the grant of compulsory licences:

Spain covers these five grounds, whereby it sufficiently provides for the regulation of compulsory licences. Portugal regulates cases of compulsory licences due to failure to work or insufficient working, as well as on the dependency of patents and grounds of public interest. Italy, however, contemplates the failure to work and the dependency of patents.

France also contemplates the grounds of public health, national economy, national defence and veterinary drugs (Article L 5141-3 of the Public Health Code). Through Emergency Law 2020-290 (23 March 2020), in response to the covid-19 pandemic, France introduced a new Article L.3131-15 into the Public Health Code, giving rise to intense debate in the French Parliament where the minister of health indicated that it did not exclude the possibility of applying for compulsory licences or maximum prices for medicinal products not manufactured in France.

Germany approved a new law that considers the possibility of granting compulsory patent licences in a national epidemic, pursuant to Article 13(1) of the current Patent Law, which had never before been used.

Broadly speaking, a compulsory licence may be granted in those cases where the applicant has unsuccessfully attempted to obtain a contractual licence from a patent owner under reasonable commercial terms and conditions, except in cases of national emergency, non-commercial public use, or to put an end to practices that violate national or Community law for the defence of competition.

In Turkey, compulsory licences have not been used in practice, and there has been only one dispute which was settled amicably in court. Under Article 1362 of the Civil Code, Russia regulates compulsory licences not only in relation to patents and utility models, but also for industrial designs.

In regard to compulsory patent licensing in Latin American (see Table 2), this chapter will focus on Argentina, Brazil, Chile, Colombia, Ecuador, Mexico, Peru, Uruguay and Venezuela, and the legal precedents of the Paris Convention (Article 5A) and TRIPs (Article 31).

In most of these countries, there are four grounds for the grant of compulsory licences:

In contrast, in Mexico there are two grounds only:

In Venezuela, compulsory licences do not exist, but since the country is a member of the Paris Convention, its application may be implied based on the provisions of the convention.

Competent authority: In most of those countries, compulsory licences are granted by the competent national office, although in cases of public interest or health emergency, an emergency must first be declared by the executive branch by express resolution. Except in a few exceptional cases, compulsory licences have not been applied virtually in these Latin American countries.

Public health: The member states of the trilateral alliance between Brazil, India and South Africa have set that in a state of health emergency their countries have the possibility to manufacture, purchase and distribute the generic drugs necessary to counteract epidemics via a less restrictive application of patent laws. The efforts made by Brazil and South Africa resulted in the Doha Declaration relating to the TRIPs agreement and public health.

Covid-19 initiatives: As a result of the covid-19 pandemic, several countries have taken initiatives to adapt their laws to the health crisis. In Brazil a group of legislators recently presented a bill to allow the government to temporarily suspend all patents concerning medical products that could be used to combat covid-19. While in Ecuador, the Education, Science and Technology Commission of the National Assembly of Ecuador has issued a resolution to require the national government to establish compulsory licences and other measures that allow for the guarantee of free and affordable access to pharmaceutical products and medical technologies due to the health emergency declaration.

The America Invents Act, which has been in force since 2012, does not include any provision on compulsory licences. However, there are other special laws which allow for the possibility of granting a compulsory licence, such as the Atomic Energy Act and Plant Variety Protection Act (for seed-bearing plants protected by plant variety certificates), that provide for compulsory licensing, although these provisions have been used infrequently at best.

Further, there are other cases that are very similar to those of a compulsory licence:

Many other legal systems also contemplate the concept of compulsory patent licensing (see Table 3), although, except for Israel, its application in practice is extremely rare. Israel was the first country to approve a compulsory licence for importing a patented HIV/AIDS medicine (Kaletra) from India for use in the treatment of covid-19. 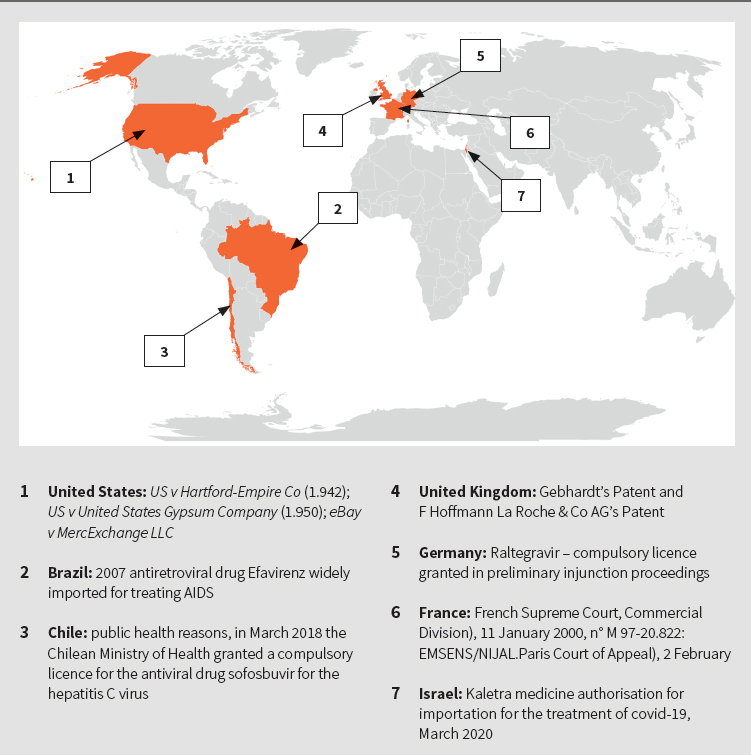 In Canada, a bill has recently been approved that would expedite the process of issuing compulsory licences for medical products, which will be added to a list of countries that seek to ensure access to medicinal products and medical devices, among other articles. In South Africa, it is possible to grant a compulsory licence provided that there is an abuse of patent rights. At present, no compulsory patent licences have been granted in Spain, although legal disputes have arisen between large pharmaceutical companies and a number of African governments, as occurred with the AIDS epidemic, where less-developed countries defended the limitation of the price of certain life-saving medicinal products for the purpose of having access to them and to save lives.