Calm before the storm: the IP impact of electric vehicle technology

The past predicts the future

What does an old, obscure Danish phone patent have to do with electric vehicles? Nothing and everything. In 1917, Eric Tigerstedt was granted a Danish patent (DK22091, see Figure 1) for a foldable phone handset.

It took seven more decades of progress within radio, semiconductor and battery technologies to culminate in the commercial debut of the Motorola MicroTAC flip phone in 1989. The flip phone and other initial mainstream mobile phone consumer products were rather clunky, basic devices. Even with such awkward devices, a McKinsey & Company study commissioned by AT&T in the early 1980s forecast that mobile phone penetration in the United States would grow to 900,000 users by 2000. In fact, by 2000 there were more than 100 million mobile phone users worldwide and, by 2019 that number exceeded 5 billion. Today, cellular wireless technologies have developed to become a ubiquitous part of every aspect of modern life and they provide far more useful features than merely voice transmission.

The current evolution of electric vehicle technologies parallels the development of the modern mobile phone. Although many patents for electric motors date back to the early 1800s, limitations in material science and battery technology were roadblocks for electric vehicles. Countless electric vehicle efforts, ranging from an electric tricycle developed by French engineer Gustave Trouvé in 1881, to the relatively modern EV1 from General Motors in the late 1990s, were stymied by the lack of critical mass in the necessary building blocks. Indeed, only recently during the past three decades have there been sufficient breakthroughs in lithium-ion cells to justify large-scale electric vehicle commercialisation. Recognition of these efforts culminated in the 2019 Nobel Prize in Chemistry being awarded to John B Goodenough, M Stanley Whittingham and Akira Yoshino for their development of lithium-ion batteries. This Nobel Prize recognised the profound influence of improved battery technology on the modern world. This key technology continues to advance mainstream electric vehicle technology.

The next technology plateau

Much has been written regarding disruptive innovation. However, moments of rapid change, which are the hallmark of innovative disruptions, have one thing in common. For any given technology, development proceeds with periodic plateaus punctuated by rapid innovation. A new normal arises when a convergence of symbiotic technology plateaus occurs. Between 1815 and 1915, the horse and carriage represented the technology plateau of personal transportation for many countries. Through the convergence of many technological areas, including petroleum science, mechanical engineering and certain manufacturing processes, the modern combustion engine benefited from a critical mass that arose to overtake established business models, displacing horses with horsepower. Indeed, German engineer Karl Benz received German Patent 37435 in 1886 for his Benz Patent-Motorwagen, although a modern automobile widely available to the masses was not developed until the Ford Motor Company’s Model T rolled off the assembly line in 1908. Moreover, the horse and carriage continued to be used well into the 1920s, and even into the 1930s in areas not yet reached by the parallel development of modern roads and fuel stations. Accordingly, the disruptive period when horse and carriage co-existed with the rising popularity of cars arguably lasted a solid 40 years before the technology plateau of the modern internal combustion engine became firmly entrenched. 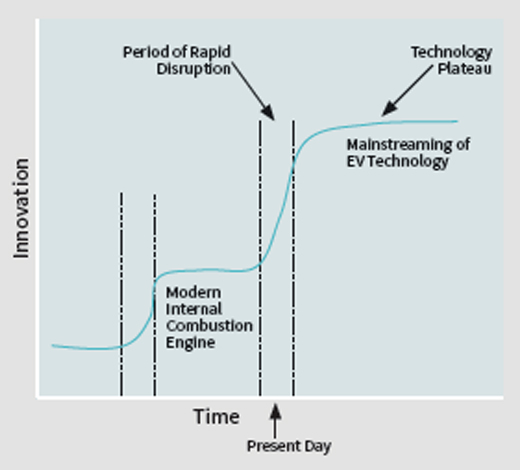 Critical mass has been attained

Disruption of the automotive industry is inevitable. However, just as cellular wireless technologies have evolved to enhance myriad consumer and industrial products and services (many of which never before existed), electric vehicle technologies will go well beyond simply moving drivers and passengers from A to B as the consumer adoption rate for electric vehicles grows. Indeed, we have reached critical mass in terms of baseline technology from which new electric vehicle-related products and services will create opportunities for the development of IP rights.

While much of the existing automotive industry is already saturated in patents, displacement of the entrenched supply chain that revolves around the internal combustion engine will result in a generation of new IP rights. Indeed, such trends are already being seen, for example, in the field of autonomous vehicles. In the past decade, the intersection of AI and transport has drastically changed the patent landscape. A simple keyword search for US published patent applications containing the terms ‘autonomous’, ‘electric vehicle’ and ‘artificial intelligence’ reveals the extent of a clear trend of near exponential growth in such patent filings over the past decade. While published applications merely provide a lagging indicator behind granted patents, there is a clear filing trend. This, coupled with an improved level of certainty in software-related patenting decisions from the USPTO (stemming from the 2019 Revised Patent Subject Matter Eligibility Guidance) will ultimately lead to more patents being granted for autonomous electric vehicle technology (see Figure 3).

As the numbers suggest, the increase in IP rights for autonomous electric vehicle technology is pushing the stakes ever higher. In 2017, a study from the research firm Strategy Analytics claimed that autonomous driving technology will create a ‘passenger economy’ that will be worth $7 trillion by 2050. That new passenger economy will bring about change across a range of industries, giving rise to a new landscape of concierge and ride-hailing services, as well as pilot-less vehicle options for businesses in industries such as long-haul transportation and package delivery.

Steady electrical supplies, standards related to grid connections, and, of course, the holy grail of fast charging, constitute the background noise emanating from the new electric vehicle ecosystem. Consumers that fret over the range of electric vehicles do not want to be tethered to their home charging station or be reliant on limited sources for topping up their batteries during extended travel. In a similar manner, environmental sensitivities to the downstream effects of electric vehicle manufacturing include what to do with the vehicle and its constituent parts once the useful life of the electric vehicle is over. Due to the nature of battery packs in electric vehicles being an arrangement of multiple lithium-ion cells, both the recycling of spent cells and the re-use of still useful cells may be possible.

What are the next IP opportunities?

While electric vehicles still represent a small percentage of global automotive sales, more than 40 new electric vehicle models from mainstream automotive companies are currently scheduled for mass production by 2025. By then, 30% of all automobile sales are expected to be for electric vehicles and hybrid electric vehicles. Indeed, Volvo, which produced its first production-line car in 1927, announced that it would be adding electric motors to each of its 2019 model year cars and has also proclaimed a target of converting half of its cars to be fully electric by 2025.

This period of rapid disruption will require the IP community to adapt to the new normal and look outside the box for new IP opportunities. For example, will recycling and related remanufacturing of used battery components (eg, lithium-ion batteries) into new products lead to issues related to patent infringement and, in particular, to a revisit of the concept of patent exhaustion?

This potential rise in new patent enforcement issues and in the revisiting of older patent concepts may also lead to confusion and conflict between jurisdictions. As an example, US and Canadian approaches to patent exhaustion can give rise to different results depending on which side of the border you are on.

The well-established basic principle of patent exhaustion is that the purchaser of a product subject to a patent obtains an implicit right to use the product without any restrictions through the initial purchase.

The US approach to patent exhaustion can be found in US Supreme Court decision Impression Products Inc v Lexmark International Inc, 581 US [2017]. The court held that a patentee’s restrictions imposed on post-sale use did not matter, although breach of contract remained viable post-sale. This means that, for remanufactured products (eg, lithium-ion battery components used in electric vehicle products), any patent-based post-sale restrictions imposed by a patentee would be void (ie, the patentee’s patent enforcement rights were exhausted) but a cause of action for breach of contract would be available.

In contrast, Canadian courts have consistently stated that an implied licence is formed in the rights acquired by a purchaser of a patented product. However, there is one notable exception. In the Supreme Court of Canada decision Eli Lilly & Co v Novopharm Ltd, [1998] 2 SCR 129, the court confirmed that a patented product sold by a patentee transfers ownership of that product to the purchaser, subject to any agreed restrictions. Moreover, such restrictions can run with the product. However, if no restrictive conditions were imposed by the patentee, the patentee’s rights are, effectively, exhausted in that product. As such, the purchaser would be free to use the product without restriction when the patentee fails to communicate any restrictions of use that may have been intended to be part of the initial purchase.

Nevertheless, there are no clear laws within Canada that would suggest that a patent owner’s enforcement rights are exhausted regardless of any restrictions on the initial purchase. This is particularly interesting as it contrasts with, for example, the US perspective on patent exhaustion as seen in Lexmark.

This Canada-US distinction might lead to some surprising consequences. For example, for cross-border sales of remanufactured lithium-ion batteries, a patentee who places post-sale restrictions on their patented product is precluded from enforcing US patent rights against a purchaser as a result of the Lexmark case. However, within Canada, the same patentee could enforce its corresponding Canadian patent rights against the same parties.

The future is now

The above simply highlights that this period of rapid disruption brings forth not only a clear increase in potential electric vehicle-related patenting activity and a potential for products and services relating to electric vehicle technology, but also many questions for innovators about how to navigate the IP landscape.

The future is bright for electric vehicle technology. In 2018, a market study by JP Morgan projected that that the electric vehicle market would rise to 8.4 million vehicles and to a 7.7% market share of the general automobile market. Will this prediction fail to foresee the true tsunami of disruption, much like how the McKinsey & Company study sorely underestimated the adoption rate of mobile phone technology? Only time will tell, but the trends are clearly visible. From an IP-opportunities perspective, mining the entirety of the electric vehicle technology ecosystem as a source of intellectual property will be key.