In the strategic management of a company’s IP portfolio, many consider the patent and trademark counts first. Yet for new inventions, technical solutions and designs, other forms of IP right should be contemplated. This chapter explores two other forms of protection that may complement patents in particular, and could prove an asset to any global IP portfolio.

Similar to utility patents, utility models protect new technical inventions through the granting of a limited exclusive right to prevent others from commercially exploiting protected inventions. Utility models are sometimes referred to as ‘short-term patents’, ‘utility innovations’ or ‘innovation patents’. While a comprehensive global definition of a utility model is not available, in general, utility models are considered particularly suited for protecting inventions that make small improvements to existing products or inventions that have a shorter commercial life. An owner of a utility model obtains the exclusive right for a limited period, usually between six to 15 years from the filing date, depending on the country.

Utility models afford similar protection to patents. A granted utility model prevents the protected invention from being commercially made, used, distributed, imported or sold by others without the owner’s consent. Utility models are jurisdictional, meaning that the right can be enforced only within the country in which a utility model is granted.

Many countries and regional patent offices provide utility model protection, with notable exceptions including Canada, the United Kingdom and the United States.

Lower threshold for inventiveness than patents

In general, utility models have a lower threshold for inventiveness than patents. Novelty is always required but the inventiveness (or non-obviousness) requirement for patents may differ or be absent altogether. In practice, protection for utility models is often sought for innovations of a rather incremental character that may not meet the patentability criteria of a patent.

Utility models are generally unexamined and granted as of right provided that they meet all national formality requirements. The validity of a utility model is usually only assessed during subsequent enforcement proceedings.

As a result, the registration process is often simpler and faster, sometimes taking six months or less. In countries that register utility models without analysing inventive step, registrations can be obtained within several weeks of filing. Patents typically take three or more years to be granted.

Fees for obtaining and maintaining utility models are cheaper than for invention patents.

However, some countries have a grace period – usually between six to 12 months – for applicants who have disclosed their inventions before filing a utility model application. In Europe, this grace period is particularly useful because there is no grace period for invention patents. Inadvertent early disclosure of inventions is an issue that plagues many innovators.

Utility models may be filed later under Paris Convention

While there are many advantages to considering utility models, the following notable disadvantages should be considered:

Figure 1. The utility model accounted for nearly half of Chinese-issued patents in 2018 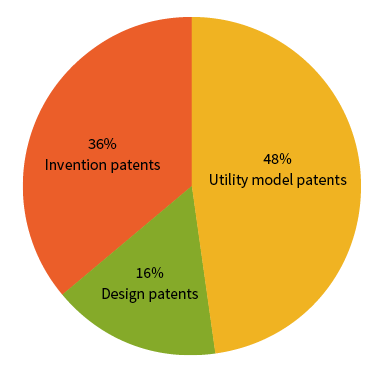 The BRIC countries – Brazil, Russia, India and China – are distinguished by their large, fast-growing economies. Filing utility models in the BRIC countries could be a sound IP strategy. For example, in Brazil, the duration of protection is 15 years from the priority date. China provides for 10 years of protection, while Russia provides up to 13 years.

To increase the quality of granted utility models, the China National Intellectual Property Administration recently launched a Plan for the Implementation of Patent Quality Improvement Project. Since 2017 the chance of a utility model application being rejected for lack of novelty increased from 0.5% (before 2017) to 4.5%. Quality of grants is also rising, with a significant increase in the number of applications being rejected for not meeting the disclosure requirement. Examination also takes an average seven to 14 months, up from a three-month average before the project started.

Courts may also grant injunctive relief for utility model infringement. In Germany, the Hamburg District Court granted a preliminary injunction for the alleged literal infringement of a utility model covering a grip for a hydraulic hose (27 November 2014, 327 O 559/14, Hydraulikschlauchgriffteil, reported at GRUR RR 4.2015, Pages 137 to 140). The plaintiff successfully argued that the utility model was valid, based on a research report prepared by the German Patent and Trademark Office that disclosed a relevant but non-identical prior art device. The plaintiff also argued the urgent need for an injunction because the defendant was exhibiting at trade fairs and offering the alleged infringing device at significantly lower prices. The court granted the injunction, stating that a further examination of the utility model is not required before an injunction may be granted if, after careful examination, validity can be adequately established.

Industrial design rights (also known as ‘designs’ or ‘design patent rights’) focus on protecting the ornamental features of a functional product. Designs have been issued on all kinds of novel features of articles, everything from the rounded rectangle shape on the front of Apple’s iPhone, to furniture, desserts, the look of a website and even the look of the Statue of Liberty. The term of protection varies globally, but typically it ranges from 10 years in China to 25 years in Europe. In Canada and the United States, the period of protection was recently increased from 10 years to 15 years.

Industrial designs have the following advantages over patents:

Figure 2. US design patent filings are on the rise (WIPO statistics) 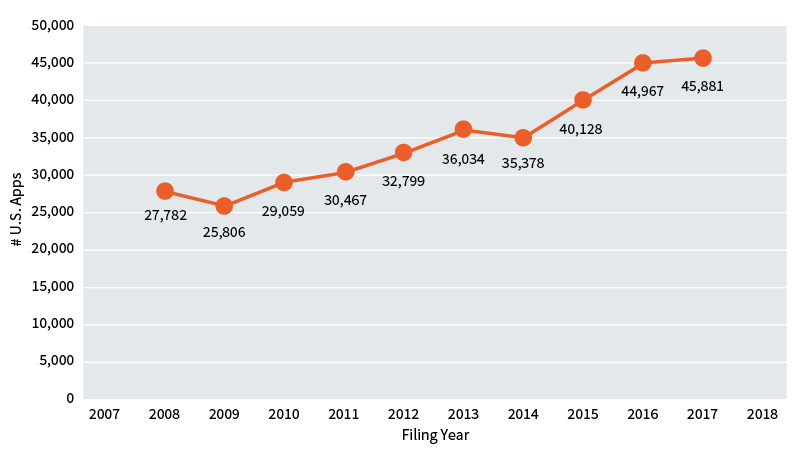 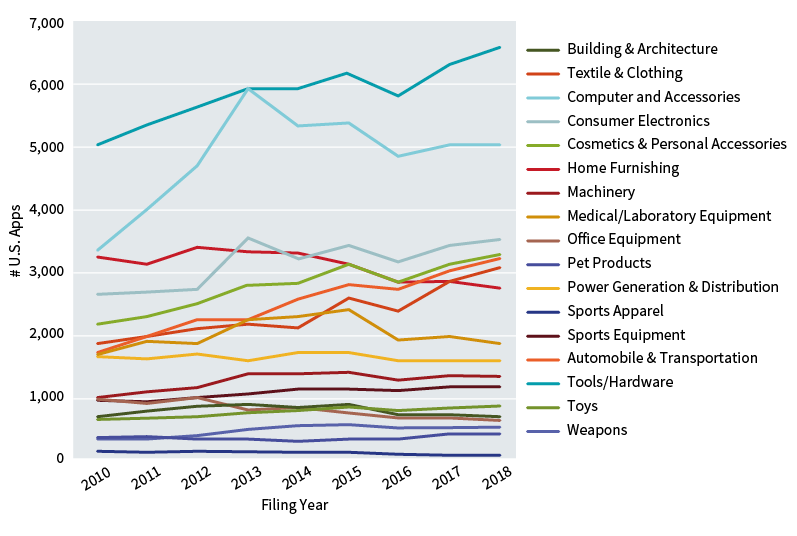 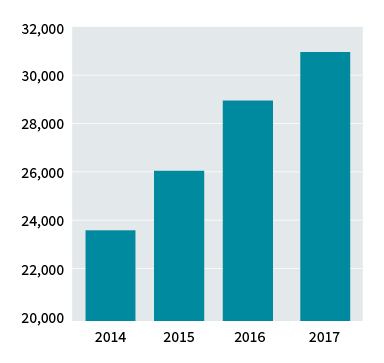 As can be seen in Figures 2 to 6, US design patent filings are not just on the rise, they are actually being used to protect more categories of invention. 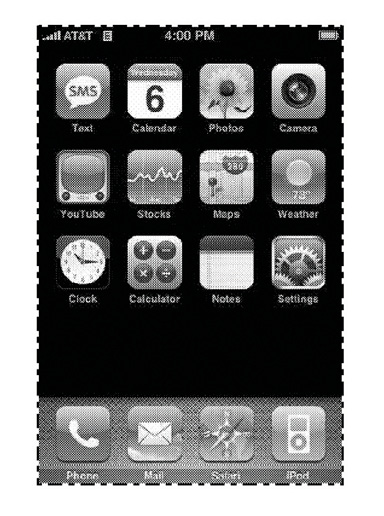 Industrial designs may be vital for protecting retail businesses where utility patents, copyright and trademarks fall short. The scope of what a design patent protects can be tailored using techniques such as showing some parts of the article in dashed lines to convey that those parts are disclaimed from the design. Designs can cover, for example, a building, a shop or a fixture of that shop. The designs of interior features such as tables, shelving units or other display fixtures, architectural features or even product arrangements can also be important to a retailer’s aesthetic. Design protection may prevent a competitor from styling their spaces in a similar way.

Microsoft, Facebook, Mitsubishi Electric, Honeywell and Uber have been early adopters of the Canadian Intellectual Property Office’s (CIPO) new practice that allows an animated graphical user interface (GUI) to be filed as a single design. The CIPO now considers computer-generated animated designs with a sequence of frames to be protectable as a single design. Software designers should consider taking advantage of the new practice for animated GUIs, either in parallel or as an alternative to utility patent protection.

One of the most notable examples of industrial design enforcement of GUIs is Apple suing Samsung for infringing Apple’s unique iOS interface design (US Design Patent D604305). After appeals and retrial, the court found in favour of Apple and awarded approximately $500 million in damages (Apple Inc v Samsung Electronics Co, No 11-CV-01846 (ND Cal)).

Utility models and industrial designs should be considered as valuable IP rights within an IP portfolio. These IP rights can be useful in seeking quick settlements when competitors are copying your designs or technical solutions. Given the relative lower cost of obtaining such protection, in countries where patent protection is not being sought, industrial designs and utility models can be a worthy alternative form of IP protection.