Clarifications on the status of well-known trademarks

In Romania, Law 84/1998 (as republished) transposes the EU Trademarks Directive (2008/95/EC) into domestic law. However, the Romanian legislature did not approve the term ‘approximation of laws’ under the directive, with particular regard to the legal status of well-known trademarks. Thus, Article 3(1)(d) of Law 84/1998 stipulates that a “well-known trademark is a mark widely known in Romania among the targeted public segment for the goods or services to which it is applied, without the necessity of trademark registration or use in Romania in order for it to be opposed”.

Use and revocation – unfair advantage for well-known trademark owners?

The provision that the use of a well-known trademark is not necessary is a breach of Article 6bis of the Paris Convention, which provides protection for unregistered marks that qualify as well known (ie, through use). Use is a clear requirement for registered trademarks; for example, Point 9 of the preamble to the Trademarks Directive states that “in order to reduce the total number of trademarks registered and protected in the Community and, consequently, the number of conflicts which arise between them, it is essential to require that registered trademarks must actually be used or, if not used, be subject to revocation”. Article 12 of the Trademarks Directive further provides that a trademark may be revoked if it has not been put to genuine use for a continuous period of five years.

Article 6(1)(f) of Law 84/1998 stipulates that a trademark registration may be refused or annulled if, at its filing or priority date, it is “well known in Romania within the meaning of Article 6bis of the Paris Convention”. Article 24(1) of the law goes on to elaborate the grounds for refusal of well-known trademarks, including with respect to:

The legislature’s intention in this regard was to avoid monopolies and barriers to market competition through an enterprise’s acquisition of well-known status for a trademark for an undetermined period, to the effect that the enterprise could cease to actually use the trademark while maintaining legal protection for it. However, the legislation should have stipulated that the trademark owner must use the mark in order to establish its well-known status.

The legal provision at issue effectively facilitates the protection of obstructive, anti-competitive trademarks, whereby no other party can register or commercially use a mark that is identical or similar to the well-known but unused trademark; nor can any party legally petition for revocation on the grounds of unjustified non-use. Considering the dynamics of the IP domain, non-use of a well-known trademark essentially contradicts its well-known status. This raises two questions:

There can be only one answer: for a trademark to be well known among the concerned public for the goods or services to which it applies, it must be used in order to actually exist on the targeted market; without use, it cannot maintain wide recognition.

The provision also appears to violate Article 16 of the Constitution, which guarantees that “citizens are equal before the law... without privileges and without discrimination” and provides that “no one is above the law”. As the provision in question effectively exempts well-known trademark owners from the obligation to use their marks, while also excluding the possibility of revoking such marks for non-use, it privileges well-known trademark owners over other parties seeking to use the mark or register an identical or similar mark. In light of Article 16, this could constitute discrimination against registered trademark owners, whose trademark rights can be revoked for unjustified non-use.

The fundamental right of free access to justice under the Constitution is not an absolute right and may be limited by certain formal and substantive requirements imposed by the legislature, pursuant to Article 21 of the Constitution. However, such limitations must not adversely affect the basis of this fundamental right. The provisions in question virtually eliminate the right of access to justice, as an application for revocation of a well-known trademark on the grounds of non-use for an uninterrupted five-year period would be rejected as inadmissible. This is because Article 46(1)(a) of Law 84/1998 expressly provides that the five-year term shall run from the date of registration in the Trademark Register; this requirement therefore would not apply to an unused and unregistered well-known trademark. Such well-known trademarks thus cannot be revoked through legal procedures, which may be considered an unreasonable limitation of free access to justice.

The acquisition of well-known status effectively gives the trademark owner an absolute and inexhaustible right over the trademark, since a non-use revocation action is inadmissible in this context – thus potentially legitimising and protecting obstructive, anti-competitive trademarks and breaching constitutional law.

In Paeffgen GmbH v Germany the European Court of Human Rights stated that trademarks constitute a ‘good’, the property rights to which are ensured by Article 1 of the first additional protocol to the European Convention on Human Rights. However, although the right to property is constitutionally guaranteed in Romania, Article 44(1) of the Constitution stipulates that “the content and the limits of this right are established by the law”. Moreover, the Romanian Constitutional Court has consistently held that the right to property is not an absolute right and “may be subject to certain limitations, in accordance with Art. 44 para. (1) of the Constitution”. In this legislative and jurisprudential context, the provisions in question give well-known trademark owners an absolute, unconditional right to use the mark in their trading activities without observing the legal obligations imposed on owners of registered trademarks (be they well known or not).

That said, the primary obligation to use a trademark de facto applies to well-known trademarks pursuant to Article 3(1)(d) of Law 84/1998, which stipulates that a trademark must be known by the targeted segment of the public in order to become and remain well known. Aside from using a trademark on the market and in direct communications with consumers, there appears to be no other way to make the trademark publicly known.

The provisions in question grant unjustified, anti-competitive protection to well-known trademarks, in that they can remain well known without being used and cannot be revoked. These provisions therefore must be removed in a future amendment to the trademark law. The definition of ‘trademark owner’ used in the provisions governing opposition and revocation should also be amended to include unregistered trademark owners. 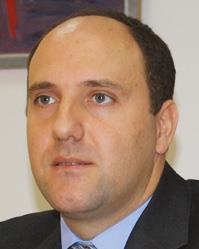 Adrian Cavescu graduated from law school in 1999 and is admitted to the Bucharest Bar Association and the Romanian IP Chamber. His practice covers all aspects of IP, commercial and corporate law and he has over 10 years of experience in these fields.

Before joining Rominvent, he worked for the IP department of the Police, specialising in anti-counterfeiting investigations. His practice focuses on trademarks and industrial designs and deals with a broad range of IP matters – particularly for well-known trademark owners – including litigation and enforcement, police and customs seizures, domain name disputes and combating infringements and counterfeiting.