Prosecuting patents before the Brazil Patent and Trademark Office (BRPTO) has always been a time-consuming task; applications take more than 10 years on average to be examined. This is also true of trademarks – where a pre-grant opposition has been filed, the examination may take more than five years. Complex cases lodged with the BRPTO that involve administrative appeals take an even more unreasonable amount of time to complete.

The BRPTO has struggled to reduce its application backlog in order to process applications within reasonable timeframes. The hiring of 27 new trademark examiners in 2014 and around 70 patent examiners in 2016 is unlikely to resolve the problem. As the BRPTO lacks financial independence and the Brazilian government has little interest in addressing the backlog, a long-term solution seems to be a distant prospect.

The constantly changing political situation in Brazil may well be compounding the problem. Nevertheless, businesses need to handle the delays caused by the backlog in a practical way. Despite the limited options available in comparison to other jurisdictions, patent applications in Brazil can still be expedited. This chapter highlights the available options to expedite patent examination at both the administrative level (before the BRPTO) and the judicial level (before the federal courts).

Applications by Brazilian small or medium-sized enterprises that are first filed at the BRPTO and claim priority abroad are entitled to fast-track examination. However, unless a foreign party is willing to file an application in Brazil first, these options are not very useful.

Until recently, the BRPTO would also grant fast-track examination for green technologies. However, this programme was discontinued after three years. In April 2016 the BRPTO announced that the third phase of this programme had concluded and that it was “temporarily suspended for result assessment”. Information from the BRPTO suggests that the green patent project has neared the 500-request limit; 306 of these requests were accepted for fast tracking.

BRPTO Rule 80/2013 provides for fast-track examination of applications involving pharmaceutical products and processes, as well as devices and materials relating to public health. Priority examination under Article 1 of this rule can be requested by either the Ministry of Health or any stakeholder in reference to the diagnosis, prophylaxis and treatment of AIDS, cancer or neglected diseases.

The BRPTO has also issued a more general rule – Rule 151/2015 – that provides for fast-track examination where:

The BRPTO recently signed a strict Patent Prosecution Highway (PPH) pilot programme with the USPTO. The programme is limited to technologies in the oil and gas sector and patent applications filed as of January 1 2013. Only around a dozen applications have benefited from this programme thus far. However, its introduction marks a paradigm shift in Brazil and may be the first step towards a full multi-country PPH programme. Considering that the BRPTO has recognised the legal viability of a PPH programme, it is hoped that sooner or later a full PPH programme covering all technologies and additional countries will be rolled out.

Expediting through the courts

Some rights holders may decide that they cannot wait any longer to obtain patent protection or may satisfy none of the fast-track eligibility requirements. As such, many have taken court action in order to circumvent the BRPTO backlog. These suits, which are filed before the federal courts, claim that the BRPTO’s delay not only is unreasonable, but also violates constitutional provisions on public administration. Such suits seek a court decision ordering the BRPTO to decide pending cases within 60 days – the general turnaround time established by the Administrative Proceedings Code.

Most of these suits are decided by federal district courts in the state of Rio de Janeiro, where the BRPTO is headquartered. The good news is that some of these courts have exclusive jurisdiction over industrial property; four specialised courts are in charge of handling cases filed against the BRPTO in Rio de Janeiro. Appeals are decided by the first and second specialised panels of the Court of Appeals for the Second Federal Circuit. Notably, federal courts in Brazil have broad judicial review powers against any government act and suing the BRPTO in these courts is a common means of reversing myriad BRPTO decisions.

In 2014 the second panel of the Court of Appeals for the Second Federal Circuit issued a unanimous decision upholding a lower-court order granting the BRPTO 60 days to decide an administrative appeal submitted seven years earlier against the rejection of a trademark application. This important precedent means that such unreasonable delays violate both the statute regulating federal administrative proceedings and the IP statute, and “fail to comply with the constitutional principle of the reasonable length of proceedings”, as the court stated.

In 2014 the first panel of the Federal Circuit also had the opportunity to rule on this matter, unanimously upholding a lower-court decision that had ordered the BRPTO to decide a trademark post-grant opposition procedure initiated nearly five years earlier. Despite the BRPTO’s arguments that this decision violated the separation of powers and could disrupt the public administration, the courts acknowledged that the delay was unreasonable and violated the constitutional right to proceedings of a reasonable duration, as well as the basic constitutional principles that govern public administration, including:

This decision also reinforced the practice of establishing a 60-day deadline for the BRPTO to issue a decision after it has received the court order.

Data shows that a day in court can save several years of effort and precious IP rights. At first instance, out of 32 cases before the federal courts relating to unreasonable delay at the BRPTO, 26 culminated in favourable decisions ordering the BRPTO to expedite examination (see Figure 1). At second instance, out of 20 appeals, 15 resulted in similarly favourable decisions (see Figure 2). 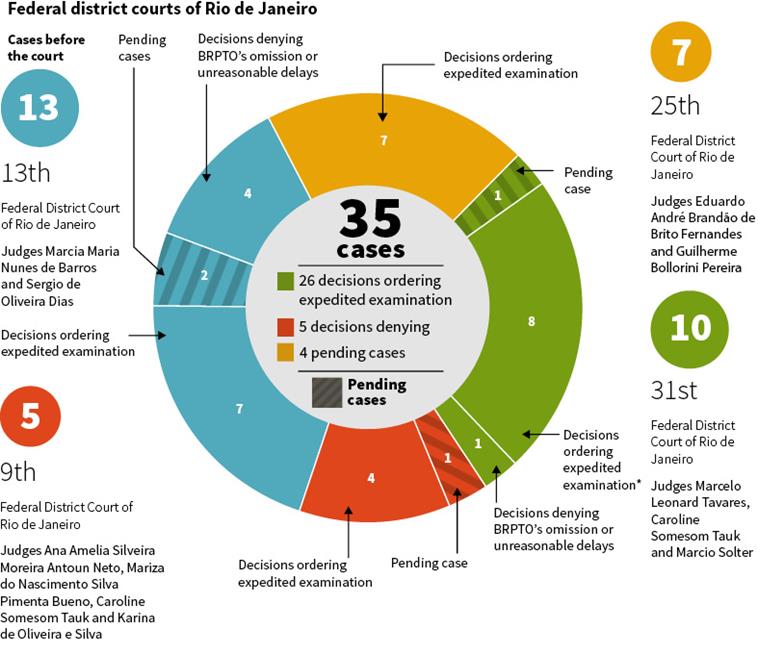 The statistics clearly show that the courts are accepting claims of unreasonable delay simply to expedite applications. In this regard, the judicial route is the most effective strategy to address the backlog problem in Brazil.

It is important for companies doing business in Brazil using IP assets to determine whether their portfolio contains patents that are eligible for any of the available fast-track procedures, and to analyse the current state of their business, as this will guide decision making as to the appropriateness of a lawsuit.

Accordingly, it is critical to become familiar with the options available to handle current issues. In respect of the BRPTO backlog, two different routes can be taken. The first is an administrative request before the BRPTO; however, in this case the application must be eligible for expedited examination. The second is through the courts, where an unreasonable delay by the BRPTO can be claimed while requesting a court order to expedite examination and issue a decision within 60 days. 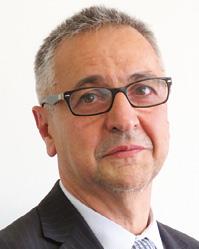 A civil engineer and professor, Luiz Otavio Beaklini is a patent expert at Licks Attorneys. He has been at the forefront of the Brazilian IP field for over 30 years and forged a distinguished career at the Brazilian Patent and Trademark Office, where he served as acting president, commissioner of patents and chief of the civil engineering art group. Mr Beaklini was an active member of the working group that set out both regulations and examination guidelines for the Brazilian patent statute. Mr Beaklini is a frequent keynote speaker and the author of numerous articles on patents in Brazil. He is renowned for his patent prosecution skills and expertise. 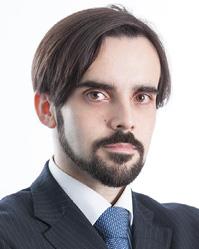 Roberto Carapeto is the head of Licks Attorneys’ Tokyo office. He has significant experience advising Asian companies while working as both an attorney and researcher, dealing with IP matters such as patent litigation, anti-counterfeiting measures and unfair competition. Mr Carapeto is a research collaborator at Waseda University’s Research Centre for the Legal Systems of Intellectual Property. Fluent in Japanese, he also runs a website in this language providing information on intellectual property in South America, available at http://brazilchizai.wordpress.com.