This chapter examines certain statistical characteristics of pharmaceutical patent royalty rates based on the licensee’s revenue. It focuses on royalty rates extracted from 3,322 unredacted licence agreements filed primarily with the US Securities and Exchange Commission.

Unlike the ubiquitous normal distribution, the mean of the lognormal distribution is given by α = exp(μ + 0.5 σ2) and the variance by β2 = α2 η2, where η2 = exp(σ2 – 1). The median is more tractable at exp(μ), which coincides with the geometric mean (see Aitchison & Brown, Formulae 2.7, 2.8 and 2.9, p 8). In context, we consider a large sample of 3,322 third-party pharmaceutical patent royalty rates based on the licensee’s revenue and show in Figure 1 that the histogram of the lognormal curve provides a good fit.

Using industry royalty rates is seldom defensible in specific applications, such as determining reasonable royalty rates to establish patent or trademark infringement damage or determining arm’s-length royalty rates in transfer pricing corporate tax compliance. In these applications, judgement (non-random) selection of ‘comparables’ is made using primarily qualitative criteria that are difficult to survive scrutiny. These judgment samples are often very small, consisting of five to 12 comparables, making it difficult to ascertain the statistical distribution of royalty rates and compute reliable estimates of central tendency and data spread. For example, in a recent transfer pricing litigation the US Tax Court rejected the petitioner taxpayer’s (Medtronic) royalty rates analysis based on seven comparables selected from almost 1,300 licence agreements, because an expert proposed “a broad and unconvincing” range of technology (medical devices) royalty rates between 0.5% and 20%. In the same case, based on another expert, the Internal Revenue Service (respondent) proposed extraordinary royalty rates of 49.4% and 58.9% of the licensee’s revenue, and such improbable large difference lying between two consecutive years (2005 and 2006) (see Medtronic v Commissioner of Internal Revenue, TC Memo 2016-112, Docket 6944-11, filed June 9 2016). The figures in this chapter show that double-digit royalty rates tend to be outliers, meriting a detailed explanation of their incidence in specific applications.

For intangible licences, the comparable circumstances described in US Treasury Regulation Section 1.482 and the Organisation for Economic Cooperation and Development (OECD) Transfer Pricing Guidelines require the analysis of the contractual terms covering the licensing of intangibles, including:

Certain factors are easier to account for than others, because sufficient information is unavailable in the unredacted licence agreement to develop a comprehensive comparability analysis as prescribed in the Treasury regulation and the OECD guidelines. In addition, the licence payments are often more complex than a simple royalty rate based on the licensee’s revenue; they may include additional payments (eg, licence fees, milestone payments or minimum royalties), and the royalty rate structure may vary as tiered and non-tiered depending on sales volume, effective year or other factors.

The next section analyses the relation of exclusivity, additional payments and rate structure (ie, tiered or non-tiered) among the royalty rates of the 3,322 pharmaceutical patent licence agreements in the sample.

One of the most important characteristics of intangible licences (including patents) is the exclusive or non-exclusive character of the agreement, which may refer to:

It may be assumed that an exclusive licence has a higher royalty rate than a non-exclusive license, because the licensee has the sole concession from the licensor of the intangibles; nevertheless, analysis of the 3,322 pharmaceutical patent licence agreements shows that exclusivity has no effect on the royalty rate (as seen in Figure 2). The high occurrence of outliers (represented by asterisks) is typical of large data samples (see D Hoaglin, F Mosteller and J Tukey, Understanding Robust and Exploratory Data Analysis, John Wiley & Sons, 1983, pp 59-62).

The majority of the agreements reviewed (2,597 of the 3,322) are exclusive. This indicates that for a pharmaceutical patent, licensors are more willing to license-out their developed intangible rights to a single licensee than to grant multiple licences and diffuse proprietary knowledge regarding the licensed intangibles.

The agreements with a tiered royalty structure present a challenge to comparability analysis, because they provide the royalty rate structure, but it is difficult to identify which of the multiple royalty rates applies during the effectiveness of the licence. For example, if the tiered royalty rates are based on the licensee’s revenue, the royalty due is phased per tier and the total royalty payment is the sum of the amount determined in each tier. In such situations, the most defensible selection criterion is to separate tiered from non-tiered licence agreements and not to mix them into an amorphous sample.

The summary statistics of the tiered rate licence agreements examined show a higher median and higher first and third quartiles when the patent licence agreements have a tiered royalty rate structure. The interquartile range of this large sample varies from 2.6% to 8%, with a median of 5% for non-tiered, and from 5% to 14%, with a median of 8.5% for tiered royalty rates. These narrower ranges indicate that the royalty rates presented by the opposing experts at Medtronic are probable outliers and inconsistent with the characteristics of the large sample of royalty rates in a related industry (pharmaceutical versus medical devices) considered in this chapter. 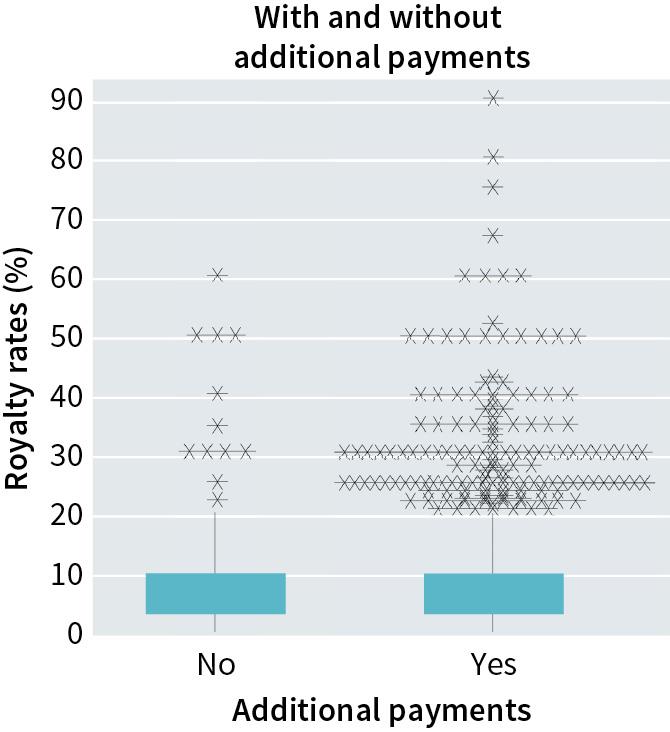 In a licence agreement, contending parties and their experts may consider other payments in addition to an ongoing royalty rate to compensate the licensor for previous R&D activities when the licence is granted (upfront licence fees), as recompense for future R&D or to reflect the attainment of certain sales goals (milestone payments) connected with comparative advantages attributed to the licensed property.

The difference between using Model 1 versus Model 2 is that in Model 1 the licensor benefits from the periodic royalty rate plus certain additional payments, irrespective of sales revenue, which may be event driven as describe above. In Model 2, the licensor is compensated only by the running royalty rate and there is no other payment.

It follows that the relevant Model 1, 2 or some other model specification must be considered when projecting future royalties R(t), for t = 1, 2, …, T, because the model used influences the numerator of the present value of the respective intangibles producing the royalty stream. Figure 4 shows that pharmaceutical royalty rates agreed between unrelated parties share similar quartiles. However, the existence of outliers is more frequent among licence agreements with additional payments reflected in Model 1. These summary statistics illustrate the similarities of the quartiles found on the box plot. Among the 3,322 pharmaceutical patent licence agreements, 2,903 include additional payments and exhibit the same quartiles of royalty rates as the agreements without an additional payment.

The characteristics (lognormal distribution, central tendency and spread) of pharmaceutical patent royalty rates show that they behave like many other economic variables. From this large sample that was examined with simple univariate and categorical analyses, the selection of comparables under the reasonable royalty rates standard or under the different transfer pricing standard must respect certain factors that may influence the amount of royalties (but not the royalty rate per se) earned by the licensor or paid by the licensee – factors such as exclusivity and additional payments. These factors appear (except for tier structure) to be independent of the sampled royalty rates. The statistical characteristics of small judgment (non-random) samples prescribed in certain legal domains, including patent infringement damage assessment and transfer pricing, are more difficult to ascertain. It is also uncertain that assuming a priori that such selected royalty rates behave like the normal distribution with well-known and simple-to-compute mean and spread can produce reliable results. These large sample results suggest that comparability analysis would be more reliable if judgment samples were abandoned and more theoretically informed – rather than ad hoc case-based – quantitative factors were considered in determining reasonable or arm’s-length royalty rates.

Julia Vasconcellos assisted in the preparation of this chapter. 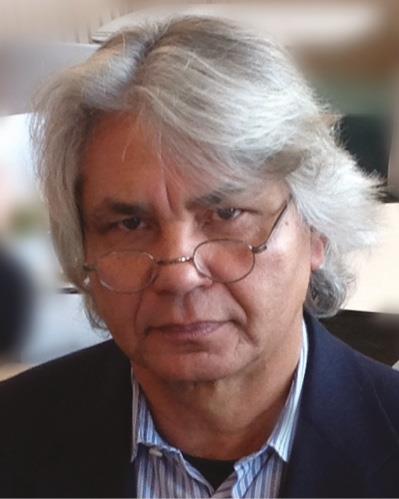 Ednaldo Silva has a PhD in economics from the University of California at Berkeley and was the first senior economic adviser at the Internal Revenue Service Office of Chief Counsel in Washington DC, a drafting member of the 1994 US transfer pricing regulations and the first economist in the Advance Pricing Agreement programme. Dr Silva introduced the ‘comparable profits method’ and the ‘best method’ rule and is a recognised international expert on transfer pricing and intangibles valuation. His practice includes serving as senior tax economist and consultant for large multinational corporations and economic expert on corporate income tax and IP litigations, including in GlaxoSmithKline Holdings (Americas), Inc v Commissioner of Internal Revenue, Dockets 5750-04 and 6959-05.