This chapter surveys developments in the litigation of fair, reasonable and non-discriminatory (FRAND) terms for standard-essential patents (SEPs). SEP litigation revolves around the following economic and legal questions:

In general, patent law permits patentees to set the price of the patent or exclude access to it. FRAND commitments disrupt this general framework by committing SEP owners to charge a ‘correct’ price and inhibiting or forgoing their right to exclude.

Market-based price setting for those buyers willing to pay the asking price is fundamental to the patent system. However, correct price determination and non-discriminatory access to essential facilities are fundamental to the regulation of competition. The SEP regime incorporates elements of both systems. Since the patent system attempts to ensure sufficiently high prices while competition regimes attempt to ensure sufficiently low prices, it is unsurprising that litigation between parties with opposing price objectives often mirrors the inherent conflict between the imperatives of these two systems.

To set recent disputes in context, it is worth summarising the basic SEP transaction and FRAND commitment:

This framework gives rise to several types of dispute.

What are the legal definitions of FRAND’s constituent parts? Does the FRAND commitment require more than a duty to negotiate in good faith? What is the economic benchmark against which a deviation from FRAND should be defined? If the benchmark is the ex ante price, at what point is ex ante defined?

Which party bears the burden of proving essentiality? Is a licence that ties SEPs to non-SEPs non-FRAND?

Is it fair or unfair to define the royalty base as the user device, rather than the smallest saleable patent practising unit (SSPPU) (eg, the baseband processor chipset)? Faced with actual licences that use one definition, is it per se evidence of unwillingness to demand the other?

If a party initially offers non-FRAND terms, is that a FRAND violation? Which party bears the burden of showing that the other is unwilling to license? What consequences (eg, patent unenforceability or market exclusion) flow from that determination?

How is compensation for past investments defined? How does one differentiate the value of the invention from the value of selection into the standard?

The answers to the above questions are frequently determined in litigation between industry players. Further, knowing the interests and relative bargaining positions of each firm, one can predict the positions that any two litigating companies are likely to take.

Figure 1. Comparison of SEP portfolios against sales of user devices 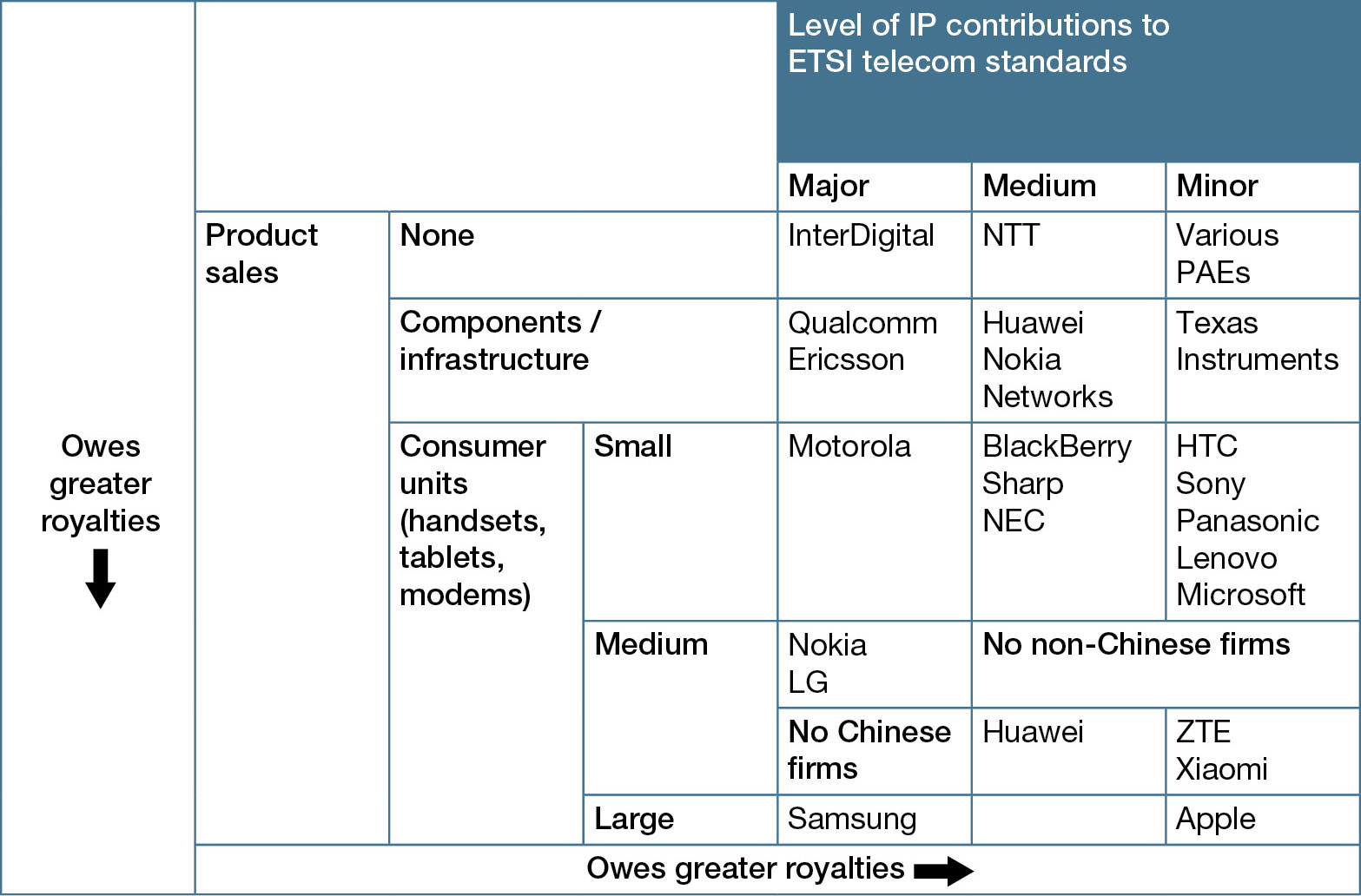 Figure 1 locates well-known telecoms companies in a two-dimensional grid which charts the size of each SEP portfolio against sales of user devices. Companies with larger portfolios demand higher royalty payments; conversely, those with greater sales make larger royalty payments. The outcome of these two forces determines whether a company is a net payer or payee with respect to any other company. In a dispute, the net payee (the company relatively north and/or west of its bargaining partner) will tend to support higher royalty rates, an injunction and other pro-patent positions, while companies located relatively south and east generally seek the opposite.

For example, Samsung asserted SEPs against Apple at the US International Trade Commission (ITC) and obtained an exclusion order (an import injunction), only to see that order overturned by the US government on public interest grounds. Symmetrically, following extensive negotiations, Apple recently asserted that Ericsson’s royalty rates are excessive. On the grid, Apple lies to the southeast of its counterparty in both disputes. In other well-known disputes (eg, Apple v Motorola and Microsoft v Motorola), the parties adopted similarly predictable positions on rates and injunctions.

Another important dynamic at work in Figure 1 is that several major contributors to telecoms standards do not manufacture user devices (non-manufacturing licensors are less vulnerable to an injunction). Some of these are research-only organisations (InterDigital); others manufacture telecoms components or infrastructure, but not terminal units (Qualcomm and Ericsson); still others have divested their manufacturing and sales facilities (to relatively low-cost producers), but retained their patents, including Nokia (to Microsoft), Ericsson (to Sony) and Motorola (to Lenovo via Google). Divestiture occurs for multiple reasons, but it is natural to infer that a divesting company’s expected profit from one-way licensing is greater than that from manufacturing accompanied by two-way licensing, given its current portfolio strength and its future manufacturing and sales prospects.

Lastly, the relationships shown in Figure 1 have important political and geographic overlays. Most prominently, the major Chinese manufacturers have made relatively small or moderate contributions to telecoms standards, while increasing their share of sales. Predictably, they favour low royalty rates and no injunctions. The Chinese government’s domestic licensee-friendly interpretation of its Anti-monopoly Law has assisted this effort. Although the United States is home to several of the largest licensors (eg, Qualcomm and InterDigital), and to a powerful institution with an exclusionary IP mandate (ie, the ITC), the US government’s intervention on Apple’s behalf favoured US competition regulators over US IP interests and implementers over patentees.

With the foregoing context, one can both accurately predict and efficiently summarise the outcome of a number of recent SEP disputes and other regulatory developments. Unfortunately, that strong predictability (on political economy grounds) leaves the world without confidence that any given decision represents an optimal global economic balance between the competing interests of current consumers (who favour lower prices today) and current innovators (and future consumers) who favour higher prices today in exchange for lower (quality-adjusted) prices tomorrow.

These developments are divided regionally, based on the overall incidence of SEP litigation, into the United States, Europe and China.

Royalty base and value of invention: In VirnetX v Cisco Systems, a non-SEP case, the Court of Appeals for the Federal Circuit affirmed two judge-made doctrines:

These restrictions on the royalty base typically favour defendants.

In the SEP case Ericsson v D-Link the court reaffirmed these holdings and further required the trial court to instruct the jury on:

These holdings, in which the court continued a recent tradition of imposing legal requirements on damages proofs without reference to economics, heighten the evidentiary threshold and affirmatively introduce into already complex damages calculations all of the other technologies embodied in the standardised device. However, the court rejected D-Link’s claim that Ericsson could not rely on licences that employed the entire phone as a royalty base, and also rejected the claim that courts must adopt the methods that trial judges employed to calculate SEP royalties in Microsoft v Motorola and In re Innovatio – two 2013 trial court FRAND rate-setting decisions that have been widely cited (and that produced royalties well below the rates sought by the SEP holder). Finally, the court held that infringer theories about patent hold-up and royalty stacking (phenomena that allegedly produce higher than FRAND rates) were inadmissible without case-specific evidence.

In CSIRO v Cisco, a third trial court determined a FRAND rate, once again rejecting both parties’ economic models in favour of its own.

SSO rules: Major international SSO the Institute for Electrical and Electronic Engineers (IEEE) recently announced important changes to its IP policy. First, contributing innovators must agree to base their royalties on the SSPPU, not on “the value of the standard”. Second, they must agree to forgo seeking injunctions against licensees. These changes, favoured by standards implementers, were quickly approved by the US Department of Justice on competition grounds, but were also quickly criticised by several large R&D performers and IP holders.

Injunctions against licensees unwilling to accept FRAND offer: InterDigital, a prominent licensor, has engaged in multiple litigations at the ITC against various manufacturers. The ITC’s 800 and 868 investigations both found that InterDigital did not breach its FRAND commitments, based on a review of existing licences and InterDigital’s offers to Huawei, Nokia and ZTE. The decision in the remanded 613 investigation cited evidence that Nokia had engaged in reverse hold-up by refusing to negotiate in good faith or accept a FRAND offer, and was therefore an unwilling licensee against which an exclusion order could be enforced. That decision is under review; notably, commissioners at the US Federal Trade Commission (FTC) weighed in on opposite sides, reflecting divided views of injunctions and antitrust remedies.

In separate litigation, Nokia asked a trial court to determine a FRAND rate for the individual US SEPs asserted by InterDigital; the court declined on the grounds that such opinion was merely “advisory”. In contrast, Huawei and InterDigital agreed to submit the same dispute to binding arbitration over global portfolio terms. Acquiescence to neutral determination of FRAND terms has been cited as a key indicator of a party’s willingness.

In Huawei v ZTE, the European Commission ruled that injunctions should not be available to an SEP holder unless an implementer is unwilling or unable to take a licence on FRAND terms. In contrast to the approach adopted by the US FTC in the Google consent decree – under which an SEP holder must prove that an implementer is unwilling – this decision places the burden on the implementer to demonstrate that it is willing, by committing to neutral adjudication of FRAND terms. However, an SEP holder which purses an injunction before the implementer indicates its unwillingness or without adequate notice may have abused the dominant position conferred by the SEP.

This decision crystallises and affirms the European results reached in Motorola and Samsung (April 2014). Motorola abused its dominant position by seeking an injunction against Apple; Samsung settled after similar efforts against Apple. Again unlike the Google result in the United States – which applied globally – the prohibition on seeking an injunction and the requirement to offer a licence extend only to Europe. On the other hand, under the European Commission rules, an infringer can avoid an injunction by agreeing to arbitrate on a patent-by-patent basis, whereas under Google the agreement must extend to the entire portfolio. Further, arbitration under Google is mandatory at the implementer’s request, while in Europe both parties must agree.

Most significantly, China closed its investigation into violations of the Anti-monopoly Law by Qualcomm’s SEP licensing practices. Qualcomm, a leading maker of mobile chipsets, required purchasers to license its patents by paying a royalty on the user device incorporating Qualcomm’s chipset, a practice that “abused [Qualcomm’s] dominance”. Qualcomm agreed:

The grounds for calculating the fine, the licensable royalty base and the appropriate reductions as patents expire were not explained.

The Chinese government imposed similar conditions in two other matters. In Huawei v InterDigital, the court found that InterDigital had violated the Anti-monopoly Law by requesting excessive rates and seeking an injunction at the US ITC. The court set a royalty of 0.019% of the Chinese sales price for InterDigital’s SEPs. InterDigital was also required not to tie a licence to its SEPs to non-SEPs.

As a condition of approving Microsoft’s acquisition of Nokia’s handset business, the Ministry of Commerce required Microsoft:

More generally, the State Administration for Industry and Commerce circulated draft regulations that impose FRAND terms on any SEP, even if the patent owner has not committed to license it (on FRAND terms or at all). The regulations also forbid “unfairly high prices” for patents owned by a dominant firm, even if the patents are not SEPs. These regulations would transform the contract-based view of FRAND commitments into a compulsory licensing regime, at regulated rates. Such provisions clearly favour Chinese implementers over non-Chinese innovators. 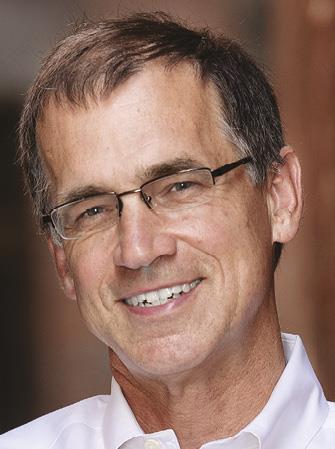 Jonathan Putnam holds BA, MA and PhD degrees in economics from Yale University, where he specialised in international, macro and R&D economics. He received fellowships from Yale and Columbia Law Schools, and a Yale international and area studies fellowship for the study of European patent systems. Dr Putnam’s PhD thesis, “The Value of International Patent Rights”, was the first to measure the world value of patent rights. Dr Putnam has been retained in more than 100 consulting engagements and has testified more than 20 times in patent, antitrust, copyright, trade secret and contract actions. He has spoken in federal, state and bankruptcy courts; before the US Federal Trade Commission and US International Trade Commission; and in US and international arbitration.