Foreign filing and effective use of the Patent Cooperation Treaty

While an increasing number of Patent Prosecution Highway (PPH) cooperation programmes are being established between different patent offices, enabling patent applicants to request fast-track examination procedures, many companies continue to face challenges in finding the right balance between cost and quality in the foreign filing process. This chapter analyses companies’ options and considers some of the issues raised by foreign prosecution.

What are the challenges when seeking to obtain patent protection in different countries?

When seeking to protect their inventions overseas, companies should ask themselves a series of questions:

The costs associated with foreign filing tend to be quite high and unpredictable. For companies with a limited budget for patents, such as start-ups, certain strategies can be implemented to help manage the financial burden of foreign filing. One such strategy is delaying costs (generally for up to 30 months after the first priority filing date) and using the time gained to assess the probability of commercial success of the invention in particular countries before filing national-phase patent applications in those countries under the PCT framework.

The tedious formalities which must be completed, the high number of invoices and inefficiencies in workflows make foreign filing a time-consuming process. The challenge is to find a way to manage the process more intelligently and optimise communication in order to obtain better results in a shorter time.

What are some of the trends in foreign filing in 2014?

The number of applications filed overseas continues to increase as a consequence of globalisation. At the same time, in countries that are experiencing economic development (eg, South Korea, China and Brazil), the number of initial national filings is increasing, which in turn will lead to more filings abroad.

On the other hand, IP service providers are beginning to operate in the area of foreign filing, offering services such as national phase entry after PCT and European patent validations.

A better approach is to focus not just on filing, but rather on the complete process, from filing through prosecution to grant. The question to ask is: what is the best way to deliver both filing and the final result – the granted patent – to applicants?

What costs are associated with foreign filing?

Costs depend heavily on how the foreign filing process is organised. There are many ways of organising foreign filing in practice, and it is important to consider each of them as they deliver different results in terms of costs and quality.

For example, take an applicant that is a US company which files in China, South Korea and Europe. In regard to organising communication in foreign filing, this can be done either directly between the applicant and the foreign associates in the three jurisdictions or with the help of a single point of contact, typically a law firm – in this example, a US law firm.

While it is clear that the filing procedure and grant steps will be carried out by the foreign associates in the different countries, the key question here is how to organise answering office actions between the three players involved – the applicant, the single point of contact and the foreign associates – as any of them (or a combination) can answer office actions.

The costs associated with this model are rather low, but certainly not minimal, as much translation work is involved. In terms of quality, the in-house patent department often has a good understanding of the invention and the prior art but because the foreign associate only translates, there is no use of the local legal know-how, resulting in average quality for moderate costs.

In contrast to this approach, the typical way of organising foreign filing and prosecution for small clients is by using a single point of contact – a preferred attorney whom the applicant trusts. In case of an office action, each of the three parties analyses it, which leads to high quality, but also high costs. This approach is known as the ‘full monty’. 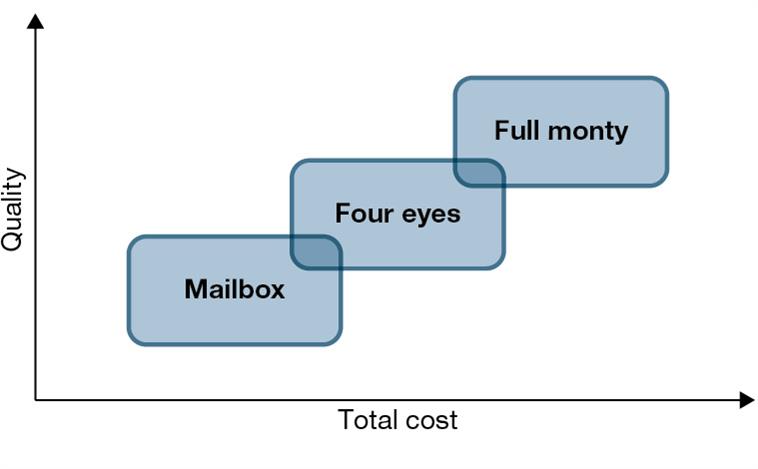 In Figure 3, looking at the different boxes marking the involvement of the various parties in answering office actions, there are 10 possible options of organising foreign prosecution work – with one, two or three parties involved. The vast majority of these theoretical options are actually found in practice.

When costs are analysed, both internal and external costs must be considered. Obviously, the quality rises if more people, money and time are invested in foreign prosecution. But what is also recognisable in Figure 4 is the law of diminishing returns – twice the money does not result in twice the quality. The mailbox approach is rather low cost, but with limited quality; while the full monty delivers the highest quality, but at the highest cost. If two parties are involved in answering office actions – known as the ‘four eyes’ approach – fairly good quality can be achieved with mid-range cost.

Generally, it makes no sense to use the PCT route if the applicant plans to file in only two jurisdiictions (eg, the United States and Europe), as the 18 months spent under the PCT will cost approximately €5,000 for Chapter I and another €4,000 for Chapter II, and the applicant will not get that money back because the United States will not take into account the results achieved during the PCT phase. The US Patent and Trademark Office (USPTO) performs its own search and examination. Therefore, the efficiency gain that could come from using the PCT phase will not be achieved in such a situation.

The efficiency gain that can be achieved

using the PCT phase is generated when the search and examination are centralised in a single office. For European-based applicants, this could be the European Patent Office (EPO), which carries out a good search and examination process. The results produced by the EPO are taken into account by many patent offices in other countries (eg, China, Canada) and it makes sense to use the PCT route when aiming to obtain granted patents in these countries later in the national phase. Thus, the PCT route is recommended when the applicant envisages obtaining a patent in more than three or four countries.

There is one more situation when applicants should choose a PCT application: if they do not know which countries they will be filing in later. As the PCT route buys about 18 months of time for approximately €5,000 for Chapter I, if they want to buy time only because they need to determine the commercial viability of the invention on certain markets or R&D considerations, the PCT can be a good idea.

Do countries take the results achieved in Chapter II into account? Are any cost savings generated when using Chapter II?

The costs of PCT Chapter II for applicants working with a law firm (as opposed to managing it in-house) are around €4,000: an office action must be answered and considerable official fees must be paid for the examination.

As stated above, the USPTO does not seriously take the results from the international phase into account, so no efficiency is to be achieved in the United States.

However, other countries do take these results into account and it can be efficient to choose Chapter II if the international search results show an obvious restriction or there is something to be discussed with the examiner. Taking the Chapter II route and receiving a positive international preliminary report on patentability can make prosecution in the national phases in China, South Korea, Russia and Europe more efficient later on, and consequently €4,000 can be well invested.

If the work carried out in the examination phase in Chapter II during the PCT phase saves applicants an office action or two in the national stages, they will save at least €4,000. And if they have two, three or more countries in the national phases, office actions are easily saved and the money will have been well spent on PCT Chapter II.

Can the PCT be combined with a PPH – and should it be?

PPH requests might work in some countries, but they are based on the grant of a patent that the applicant receives in some other countries rather than on the PCT results. In most countries a PPH request does not make sense, as it is merely an acceleration request. Canada is one exception, as a PPH request made in Canada leads to almost immediate grant, without any office actions. There may be other exceptions, but there is no empirical data for this at present. Elsewhere, however, a PPH request is only an – expensive – acceleration request. A filing strategy based on PPH consideration is ineffective in most countries and therefore not worth the money or effort. 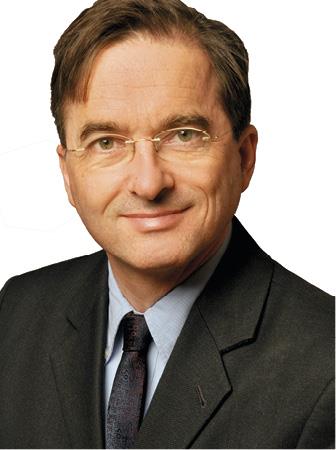 Malte Köllner is qualified as a German patent attorney and a European patent, trademark and design attorney. Dr Köllner holds a PhD in physical chemistry and a diploma in physics from the University of Heidelberg. His areas of expertise include physics, physical chemistry, optics, lasers, biotechnology, medical devices and software.

With vast experience in the field of intellectual property, Dr Köllner acts as the editor in chief of well-known German patent law journal Mitteilungen der Deutschen Patentanwälte and is a lecturer at various conferences and universities. His notable achievements in the IP area have, for several years in succession, seen him listed as one of the world’s leading lawyers and IP strategists.