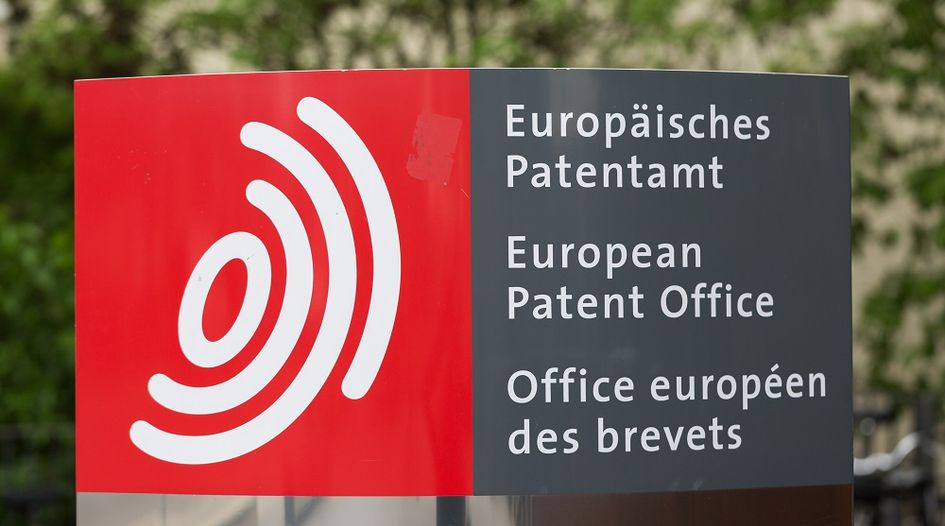 The EPO allows applicants to seek patent protection in up to 44 countries via a single, centralised patent application process. As part of this streamlined offering the EPO also operates a centralised procedure by which third parties can seek invalidation of patents granted by the EPO. This process is referred to as ‘opposition’. The ability to attack a granted patent centrally with a view to limiting or revoking it in all designated countries simultaneously is extremely efficient. It is therefore no surprise that the opposition system is well used by businesses wanting to manage risk against third-party patents.

Any person wishing to object to a patent granted by the EPO has a nine-month window, starting from the publication of the grant of the patent, in which to file an opposition. The costs associated with bringing an opposition are typically an order of magnitude lower than performing a patent challenge before a national court of a single country. As such, EPO oppositions are a very cost-effective method of invalidating patents in Europe.

How do they work?

From filing a notice of opposition to a final decision, for a typical case, the EPO aims to dispose of cases within 15 months. The definition of a ‘typical case’ is unclear but may be assumed to involve:

More complex oppositions may take longer. If corresponding proceedings have been instigated in the national courts, then it is also possible to request acceleration of opposition proceedings. 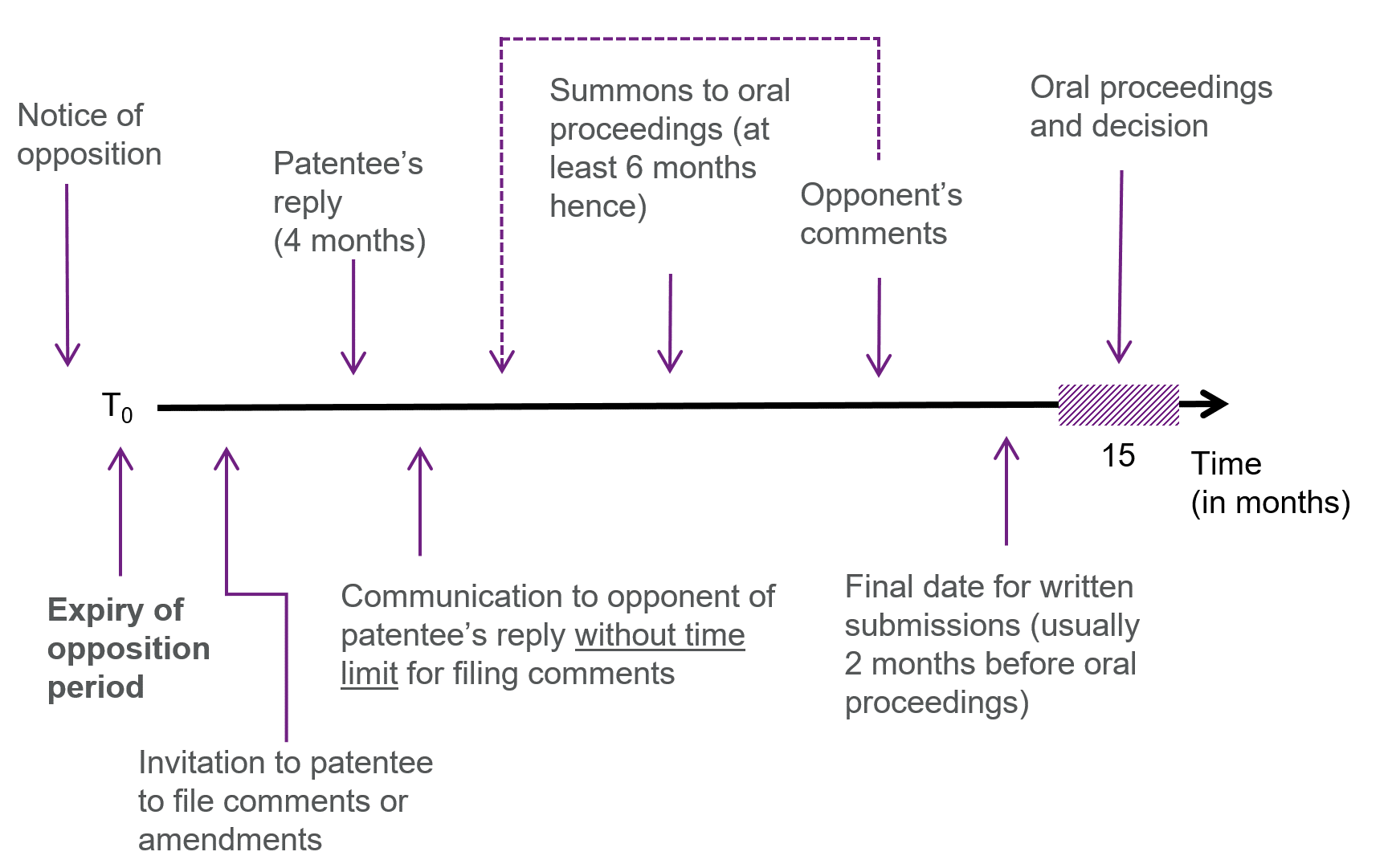 The main grounds on which patents are typically attacked include:

All opposition proceedings are open to the public.

The oral proceedings held by the EPO for oppositions typically last only one day (on rare occasions, two days) and a decision is handed down at the end of the day (and formalised in writing a month or so later).

Decisions reached at first-instance opposition hearings can be appealed to the EPO Board of Appeal. The appeal process is not as streamlined as the opposition procedure, and the current backlog of cases before the board means that overturning or upholding decisions can take a long time. Referring to the EPO Board of Appeal annual report 2020, 90% of appeal cases were disposed of within 60 months.

As with the patent examination process (or ‘patent prosecution’) before the Examining Division, cases at opposition are heard by a trio of examiners who make up an Opposition Division. One of the members of the Opposition Division will be the primary examiner, who will have been responsible for the patent while it was undergoing prosecution. A secondary examiner and a chair, who were not involved in the case’s prosecution, are also present. All three are highly experienced examiners skilled in the technical area to which the patent relates.

Although the language of the procedure is always that of the patent under challenge, submissions at hearings may be made in any EPO language (English, French or German) and interpreters are provided by the EPO on request, usually where multiple opponents are involved. Oppositions and appeals require a range of skills, including meticulous case analysis, drafting (of submissions and amendments) and oral advocacy. The key is to present the story that will underpin a winning case. This must be framed sensitively during the written procedure, using the best technical evidence available.

Ultimately, the patent will either be maintained (ie, as granted or in an amended form) or revoked in its entirety. This differs substantially from many national proceedings where the granted claims often cannot be amended but individual claims can be found valid or invalid.

Both the legal tests and the protocols governing when and how submissions may be made during opposition are unique to these proceedings. This is especially true regarding appeals following the introduction of the revised Rule of the Boards of Appeal, last updated on 1 April 2021. As such, it is vital to engage European patent opposition specialists in such matters.

Perhaps partly as a result of the covid-19 pandemic, the EPO has greatly increased its video conferencing capability to enable more hearings to be conducted remotely. This has been valuable for both opponents and patentees – reducing the cost of hearings and enabling more individuals to attend (both from the parties to proceedings and from the wider public).

Although the Opposition Division does have the power to issue costs awards against parties in certain circumstances (eg, where an abuse of process occurs), unlike many national invalidity proceedings, both sides typically bear their own costs. This prevents parties from outspending the other side to create the threat of a potentially excessive costs award.

Another important difference between national proceedings and EPO opposition proceedings is that, even if an opponent withdraws from an opposition, the EPO may nevertheless decide to continue with proceedings of its own volition. Accordingly, once the process has started, attempting to reach a settlement with the patentee is not necessarily straightforward.

In addition, unlike national proceedings, there is no disclosure requirement before the EPO. As such, this greatly simplifies the procedure and avoids the inadvertent publication of irrelevant, yet commercially sensitive, company information.

It is also worth emphasising that the EPO is solely concerned with the validity of patents, not matters of infringement.

The biggest change to opposition practice has been the widespread adoption of remote video conference oral proceedings.

More generally, the changes made to the Rule of Procedure of the Boards of Appeal now make it much more difficult for parties to submit new evidence, or even new arguments, into later proceedings if such things were not included at first instance (ie, before the Opposition Division). These changes reflect the attitude of the Boards of Appeal that appeal proceedings are not intended to be a ‘second bite at the cherry’ but an opportunity to correct errors in the referred decision, based on the arguments and evidence that were presented in the first instance. Accordingly, parties should ensure that everything that they could conceivably wish to rely on is included in opening opposition submissions, otherwise it may be off limits at appeal.

As with so many forms of contentious proceedings, it is important before embarking on an opposition to consider what a commercial success would look like in a given scenario. There is often a range of competing factors that must be balanced. For example, do you need to completely remove a patent from the landscape or is it sufficient to force the patentee to limit its patent in a particular direction? Knowing how far you need to limit a patent so as to avoid infringement ensures that efforts and costs are concentrated where they are most valuable.

From a wider business context, it should be considered how a patentee might react in reply to your opposition to their patent. Do you want them to know that you are the party objecting to their patent; or should the patent be attacked anonymously? Raising your head above the parapet might draw attention to your business and perhaps your own patent portfolio. That said, there might also be advantages to appearing on the patentee’s radar.

It is advisable to be especially careful regarding what arguments are placed on file during opposition proceedings, particularly in sectors where there is a high degree of technical overlap between the products or processes of the parties. Failure to adhere to a consistent story where multiple parallel proceedings are pending can often undermine your own patent position.

Additional benefits of the opposition procedure

Because the EPO operates a high standard of examination, patents that survive the EPO opposition processes are likely to stand up well to scrutiny during national proceedings. Moreover, many jurisdictions look to the EPO on certain matters of case law, where the law may be more comprehensively developed. Examiners at the EPO also have a great deal of experience with patent matters and are generally well versed in the technology discipline to which they are assigned. Consequently, it is highly unlikely that the complexity of the technology in question will obscure the legal issues involved in a given determination. This can be advantageous because not all courts across Europe are equipped with a large body of technically trained judges.

Another benefit of the EPO opposition process is that parties can effectively file an opposition anonymously (provided they are not opposing their own patent). It is common practice for representatives to be identified as the opponent, masking their client’s involvement. Given that many industrial sectors have complex, interdependent supply chains, it is not unreasonable for interested parties to avoid being labelled on an opposition out of a desire to avoid appearing antagonistic with respect to a particular patentee (who may be both supplier and competitor).

The EPO opposition process is a useful tool in the arsenal of businesses to help manage risk and problem patents across many jurisdictions in a single, cost-effective procedure. The system is relatively quick, well tested and cases are heard by experienced examiners with good technical knowledge.