Patent litigation is a costly endeavour. If executed correctly and with adequate preparation, it can lead to a windfall verdict or a recurring revenue stream through licensing, or it can disrupt a competitor’s business through injunctive relief. If executed poorly or without adequate preparation, however, it could be a very costly mistake. In such instances, patent litigation can shift gains that the patent enforcer had hoped to achieve against its competitor.

This chapter highlights important considerations when launching a patent enforcement campaign against a competitor. While applicable to all technical fields, its focus is on medical device patent litigation and some of its unique aspects.

In a given medical device space, each of the following goals has benefits that differ greatly:

For many years, injunctions were the norm for infringed US patents. But in 2004, the United States Supreme Court (in eBay Inc v MercExchange LLC) stated that the standard test for injunctions also applies in patent cases (see Figure 1). As a result, the overall issue rate of injunctions went down. The grant rate for injunctions in the medical device field was affected more than in other technical fields – with a grant rate of 46% in medical device patent cases versus 73% in non-medical device cases (see Table 1) (for further details, see Christopher J Clugston and Wonjoon Kim, ‘The Unintended Consequences of the Injunction Law after eBay v MercExchange: An Empirical Study of the Effects on Injunctions in Patent Law’, 99, Journal of the Patent and Trademark Society, pages 249 and 258 (2017)). 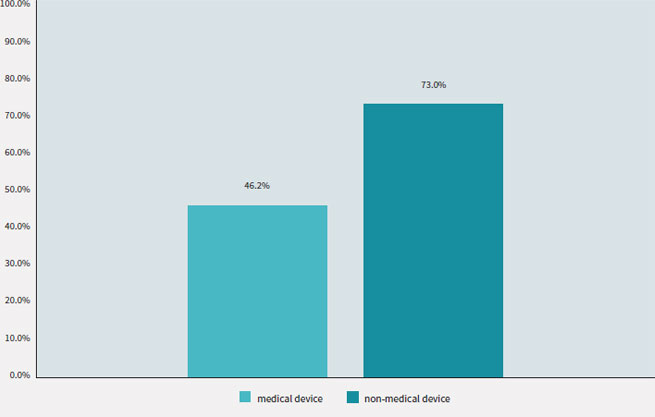 Given the generally high profit margins for medical devices, awards of damages in patent infringement cases can be lucrative. Nevertheless, restrictions have been placed on monetary damages in all patent cases over the past decade. The stated goal of these restrictions is to apportion damages to the actual contribution of the patented invention. The floor for patent infringement damages is a reasonable royalty – an amount that a hypothetical infringer would have paid when it began infringing. The goal in most cases is to recover a larger amount (eg, the profits lost due to infringement). Either way, trial and appellate courts have recently let stand or affirmed jury verdicts awarding eight-figure damages awards in medical device patent cases.

An accused infringer will sometimes agree to settle a dispute by making and selling a modified, non-infringing product going forward. If the modified product is competitively inferior, such a settlement can be valuable. In addition, in the medical device space, there are other barriers to entry. For example, it can take a significant amount of time for the accused infringer to change its product, especially if regulatory (eg, Food and Drug Administration) clearance or approval is required.

Sometimes, an accused infringer will agree to settle a dispute by paying a royalty. This benefits the patent owner because it can effectively enlarge its market share by getting revenue for products sold by a competitor. Also, on winning a patent infringement case, a trial judge may award an ongoing royalty instead of an injunction. Because they are not provided as a remedy in the Patent Act, some level of consent is required for the parties to accept an ongoing royalty.

The benefits of patent enforcement can extend beyond just the injunctive relief or damages awards obtained. The mere presence of a patent infringement lawsuit can encourage some medical device manufacturers to come to the table quickly and pay a royalty, rather than risk being subjected to the costs and uncertainties associated with a lawsuit. This can start or further a licensing campaign for patented medical device technology.

The impact of enforcement can go beyond the immediate, accused infringer. Other medical device companies may be more likely to avoid using a particular technology or may voluntarily change their products, for fear that they may be the next party accused of infringement or sued.

Know the risks and how to minimise them

Risks of patent challenges extend beyond the case itself. A bad result could jeopardise the patents asserted, nullify existing licence agreements (and royalty streams), and eliminate a barrier to entry for parties that did not previously adopt the invention (eg, to avoid infringement). These risks exist because, in addition to a finding of no infringement, patent claims can be declared invalid. In essence, the patent can become worthless against all potential infringers.

To minimise the impact of these risks, identify the most problematic prior art and select patents and claims to assert that best avoid that art. Also, it is advisable to interview the inventors and review related documents to learn more about the impetus for the invention, potential favourable or unfavourable evidence, and dates of conception. Patent enforcement is most successful when accompanied by a compelling story.

Enforcing patents has also become more challenging since 2012 when new laws created patent reviews at the USPTO. There are two types of patent review:

Post-grant review is comparable to oppositions in Europe. Petitions for post-grant review must be filed within nine months of issuance and can challenge a patent on any patentability or eligibility ground. Petitions for inter partes review can be filed any time during the life of a patent but can only challenge patentability over printed publications. The predecessor to reviews, re-examinations, could take many years for the USPTO to complete. In contrast, reviews must be completed within about 18 months.

Since reviews were created in 2012, the USPTO has cancelled patent claims in more than 66% of all reviews instituted. In addition, the likelihood of a challenger’s success often forces settlements. The lesson to be learned is that patent owners must be more careful in obtaining quality patents and selecting the best patents and patent claims to assert for enforcement.

It is important to understand where, geographically, the enforcement campaign should and will take place, and where a competitor might strike back. Patents are enforceable under national laws and therefore have limited jurisdictional reach. A strong US portfolio may, for example, provide little to no value in preventing a competitor from making or selling a product in European countries. Also, focusing on where to file a lawsuit could result in overlooking jurisdictions where a counter-attack might be launched. Knowing the likely territory of an enforcement campaign also helps to more accurately estimate litigation costs.

A pre-enforcement strategy should seek to answer the following questions:

Counsel should then conduct thorough patent searches to determine the extent of patent coverage for each jurisdiction. This will help to identify where the enforcement strategy should be launched and where a counter-attack might take place. If the enforcement campaign is planned or anticipated to be global, appropriate counsel should be engaged for each jurisdiction.

Adding to your armoury

Although it is easy to overlook the importance of patent procurement during an enforcement campaign, a continuing stream of issued patents can provide versatility and leverage. If the enforcer’s portfolio contains broad patent disclosures, it may be possible to procure additional patents that cover new features or attempted design-arounds for the infringing products. Maintaining patent applications directed at the accused products also sends a message: ‘even if you escape liability here, several more patents will soon issue’.

An underused tool for this strategy is expedited patent examination. The USPTO offers a programme called Track One in which, for an additional fee, a final disposition on a patent application can be reached in as little as one year or less. With adequate time for planning, a patent owner is well advised to mine its portfolio and file promising patent applications with requests for expedited examination to stockpile as much patent coverage as possible before launching a campaign. Be aware, however, that the mere request for Track One might signal to a competitor monitoring the portfolio that patent enforcement could be coming.

To send, or not to send, a cease and desist letter

The precise language of a cease and desist letter may dictate whether the accused infringer has grounds for a pre-emptive lawsuit. Some parties try to avoid creating such a ground by vaguely hinting at infringement in a letter. This can backfire, however, because the vague allegations may be insufficient to open the damages window, while simultaneously alerting the competitor to a potential lawsuit. Some parties take the opposite approach and firmly assert infringement. This will almost certainly be grounds for a pre-emptive lawsuit and may prompt the competitor to file in its desired venue. If the patent owner responds with its own infringement lawsuit in a different venue, that lawsuit will likely be transferred to the accused infringer’s venue where the first pre-emptive lawsuit was filed.

There are many considerations before filing a patent infringement lawsuit, each of which should be adequately vetted with counsel before moving to the enforcement stage.

The two primary fora in the United States for enforcing patents are the federal district court and the International Trade Commission (ITC). Federal courts have exclusive jurisdiction to hear patent infringement lawsuits. The ITC has authority to prevent infringing products from being imported through exclusion orders. If granted, an exclusion order can provide an effective and complementary remedy to those available in district court. The district court and the ITC serve different purposes and offer different remedies. Varied considerations can help determine where to file.

Patent infringement litigation varies considerably depending on the district court in which it is conducted. Many factors must be considered when deciding where to sue. First, a federal district court must have personal jurisdiction over the parties, meaning it has authority over the parties to bind them to the court’s decisions. Personal jurisdiction is typically satisfied when a party is sued:

The next consideration should be venue, which refers to the specific courthouse where a lawsuit is filed. In 2017, the United States Supreme Court narrowly construed the patent venue statute and effectively ended forum shopping. Now, venue is proper only in a judicial district where the defendant resides (ie, is incorporated) or has committed acts of infringement and has a regular and established place of business.

Once personal jurisdiction and venue are investigated, a patent owner is left with a pool of potential courts in which to file a patent infringement lawsuit. This pool can be narrowed based on patent-specific considerations, including:

FIGURE 2. Chart illustrating median time to trial in the 10 courts that have heard the most patent cases over the past decade 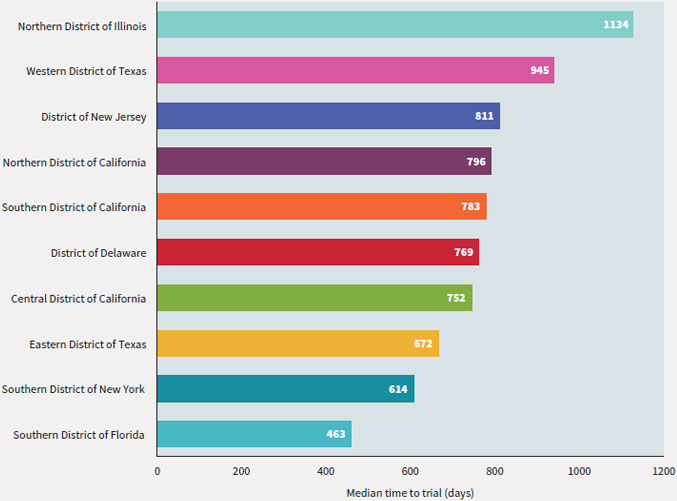