Unlike other countries, Japan has no data exclusivity system. Instead, the major factors that prevent the entry of generics into the market are:

Price listing may also be relevant under the universal national insurance system. This chapter provides a concise introduction to these unique systems that constitute de facto market exclusivity for new pharmaceutical products in Japan. The terms ‘pharmaceutical product’ or ‘drug’ are used to refer to medicinal items categorised as pharmaceuticals or regenerative medicine products under the Japanese Act on Securing Quality, Efficacy and Safety of Products including Pharmaceuticals and Medical Devices (the PMD Act).

The duration of re-examination periods from the approval date are decided and designated by the minister of health, labour and welfare following the grant of marketing approval.

The duration of a re-examination period is designated within the range stipulated by the PMD Act and the PMD Act Enforcement Regulations, (see Column A, Table 1). Regardless of the type of drugs, the minister of health, labour and welfare may extend the re-examination period to a period not exceeding 10 years, if the minister believes that the extension is particularly necessary (see Column B, Table 1). In addition to the PMD Act, the relevant notifications issued by the Ministry of Health, Labour and Welfare provide general principles for the designated periods for each type of drug (see Column C, Table 1). 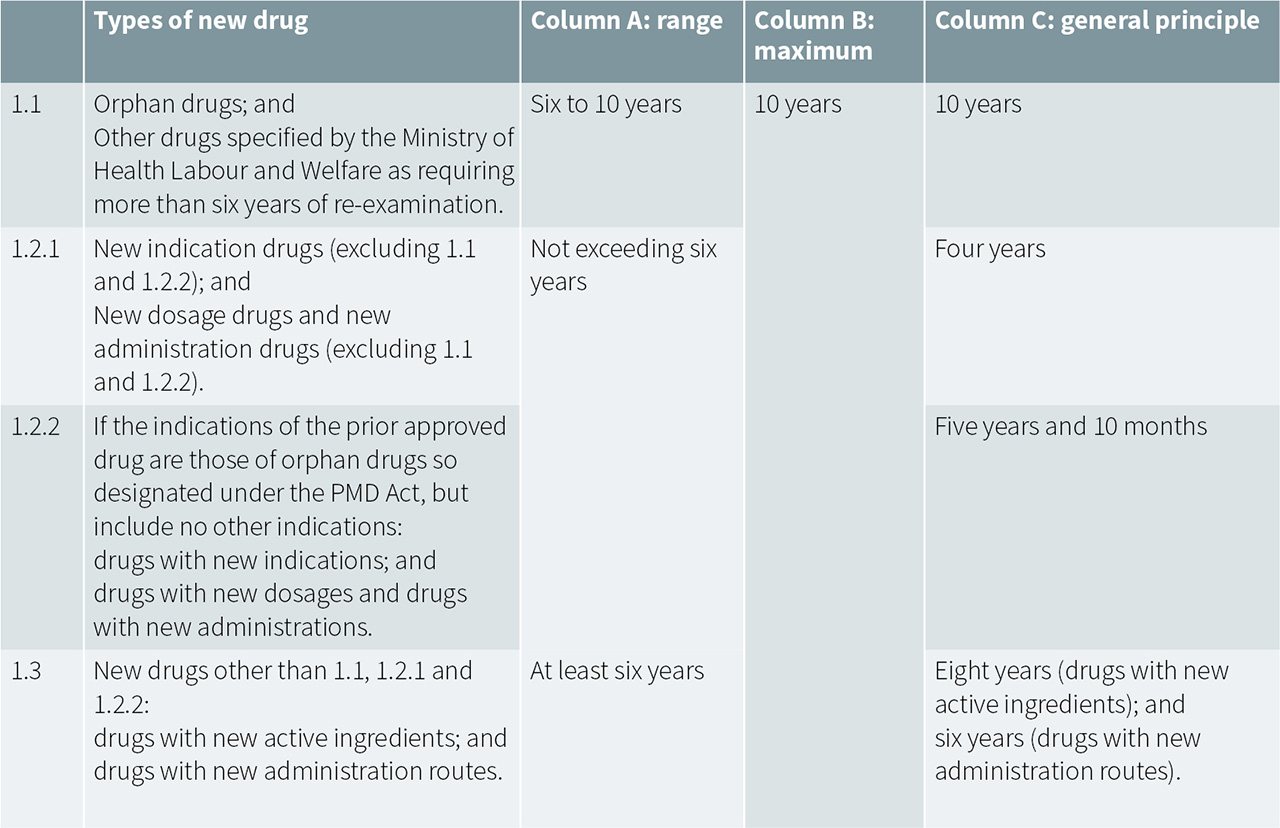 There is no specific categorisation for paediatric medicines in this regard, but the re-examination period may be extended (not exceeding 10 years) as per the necessity to collect clinical data required for the re-examination of dosage or administration for child use.

In addition, the applicability of the abovementioned court precedents where clinical trials for a new drug fall under the technical scope of a third-party patent has not been made clear under current court practice; further cases are awaited in this regard.

Article 67.2 of the Japanese Patent Act provides that, if there is a period during which it is not possible for a patentee to work the patent invention due to the need to obtain certain types of legal permission that are designated by a cabinet order (eg, marketing approval of a pharmaceutical product), the term of the patent right may be extended for a maximum of five years. In order to be granted an extension of a patent term, it is necessary to register an extension and file an application. A patent term extension is applied and registered based on each disposition (ie, each marketing approval). In a typical example where the patented invention claims ‘a pharmaceutical agent containing X’ and the patentee, as the marketing authorisation holder, obtains marketing approval for an item containing X for the treatment of disease A (Disposition A) and then obtains another approval for the treatment of another disease B (Disposition B), the patentee may file for the registration of a patent term extension first based on Disposition A and then file for another registration based on Disposition B.

If it is found that the patented invention could have been worked without waiting to obtain the disposition on which the application is based, the application for extension registration will be rejected (Article 67-3(1)).

Under Article 68-2, where a patent term extension is registered, the extended patent right is effective only with regard to the working of the patented invention of a product specified as the subject of the marketing approval that constitutes the grounds for the extension registration (ie, a product identified by “the usage, ingredient (not limited to the active pharmaceutical ingredient), dosage, form, administration and indication”). It is not effective against any other working of the invention.

Also, any product substantially the same as such specific product will be considered to be within the scope of the extended patent right.

In addition to the re-examination period and patent terms, there are other factors that create de facto exclusivity. After the re-examination period, in order to market a generic in the Japanese market, the generic maker must submit both an application for marketing approval of the generic drug, which takes about one year on average for generic drugs or more for bio-generics, and an application to be listed on the National Health Insurance (NHI) Drug Price List, which takes another four to 10 months. In Japan, it is of great importance that drugs are listed on the NHI Price List. As Japan has adopted a nationwide universal health insurance system, a generic drug that is not listed on the NHI Price List would not have market competitiveness in terms of pricing against pioneer drugs. The NHI Price List is revised only during specific months of the year, depending on the category of the items; under current practice, the revision is usually in June and December for generic drugs and in May and November for biosimilars, specifically. Thereby, the generic or biosimilar maker would have to wait until the revision, even if marketing approval is obtained earlier and the application to be listed on the NHI Price List is submitted soon after the approval.

Depending on the case, the re-examination period and the relevant patent term may or may not overlap. In addition, the interpretation of the scope of patent rights differs between the original patent term and the extended term. Thereby, the scope and timing of the permissible entry of generics is not always simple.