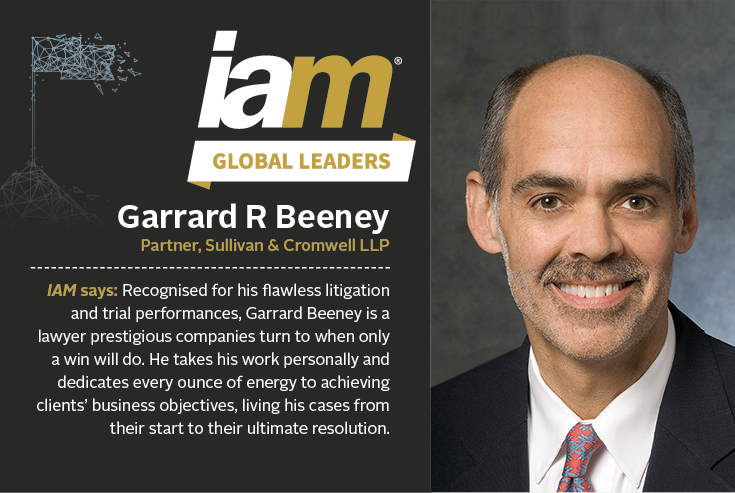 What made you choose a career in patent law?

It was more that the career chose me. As a young lawyer I did a fair amount of competition law. I defended a challenge to the Philips-Sony CD licensing programme in the 1980s and my career in patent law took off from there as I learned about CD patents and applicable law. At about the same time, intellectual property became increasingly important to our clients which were seeking good lawyers with exceptional trial skills and not just technologists. Since then, I have had exceptional clients which have entrusted us with their most critical and interesting IP and patent matters in this incredibly interesting and dynamic field.

What are the main challenges you face in leading your firm’s IP practice?

My job is made easier by a cadre of talented colleagues. I think the biggest challenges are striking the right balance among multiple professional responsibilities – for example:

Over time, there has rightfully been an increased focus on costs. A patent litigation is a concrete business problem for clients, not a theoretical legal question that may be interesting to counsel. Matters must be resolved not just successfully, but also economically, and that translates into always looking for cost-effective resolutions and making judgments about where to devote resources in cases. Not every potential deposition is worth the cost; not every stone can be uncovered. A good litigator must use their judgment about where to devote client’s precious resources. I also find that my clients are increasingly partnering with us on the best way to defend or prosecute a case.

I love teaching younger lawyers who are interested in improving; watching ‘the light go on’ for a dedicated younger colleague is rewarding. I also love the challenges of trial – for example, thinking about:

Trial is live theatre in the best sense of the concept and I love directing the play. Although, ultimately nothing compares with winning for your client – for example, the recent $960 million award obtained for our client BlackBerry is among the most rewarding moments of my career because of what it meant to the people at BlackBerry.

From a litigator’s perspective, what are the major differences between the Supreme Court, the ITC, the US Court of Appeals for the Federal Court (CAFC) and the district courts?

There is a common thread to many of the points: be prepared to address what your adversary is going to do before they do it and know your audience. However, in each of these examples the audience is different. Your case in the Supreme Court must appeal to non patent judges and you must make sure your proposed outcome or the rule you want the court to adopt addresses every foreseeable application of the principle you are advocating. In the CAFC, you have knowledgeable patent judges who will often dive more into the weeds of technology and patent law and you must demonstrate why established precedent compels the result you seek, or no longer is a good or just principle. In both forums, you must hit the highlights in a short period, portraying your issues at a high level that is appealing and address both the questions an appellate judge is likely to have (whether verbalised or not) and what you believe your adversary will present.

What skill set does a top-class litigator possess?

You must recognise that your job is not only to be right, but also to convince someone else that you are right. Using common sense to reach your audience and construct a case theory or story that appeals to your audience is a critical skill. A skilled advocate uses the law, witnesses and exhibits to tell a compelling and cohesive story that appeals to the audience. To do so, you must delve into the make up of the decision maker and decide what will appeal to them. What will the trier of fact find believable and appealing? What is likely to have happened based on who they are? As well as common sense, a good trial lawyer must be able to read people.

Is it fair to describe the United States as being less patent-friendly than it used to be?

It is a less fair characterisation than it used to be. The US system fiercely protected intellectual property 20 years ago and it is no doubt true that a backlash regarding bad or soft patents led to the United States being less patent-friendly in recent times. But over the last three years or so, the system has adjusted and I believe that the United States is one of the best places, if not the best place, to assert IP rights – for example:

There are new ways, based on new case law, of addressing damages for non US infringing sales and the ITC remains a forum to seriously consider. The head of the USPTO is doing a terrific job of balancing multiple constituencies and protecting significant inventions and the head of the antitrust division has taken an admirable and thoughtful position on the application of competition law to IP rights. So, there are a myriad of favourable developments.

In terms of SEPs, injunctions are no longer out of the question and a recent body of case law suggests an unwilling licensee may have forfeited any right to a licence on FRAND terms. Balanced against recent developments in other jurisdictions, such as Europe, I would argue that the United States is trending in a favourable way for patentees while other jurisdictions are trending away from patentees.

In sum, the ‘bad rap’ for the United States in terms of protecting patent rights has not really caught up with where we are today.

You have done a lot of international work, what do you see as the major differences between the key jurisdictions?

In many respects (eg, what constitutes fair and reasonable negotiation protocols for licensees and licensors with respect to SEPs), multiple jurisdictions are coalescing. There is a lot of common ground in Europe, China, Korea, Japan and the United States Perhaps the greatest differences that remain, however, include:

Some – wrongly in my view – necessarily conclude that these criteria are either good or bad in all circumstances. However, each venue has its own approach for the specific dispute at issue and a single source of advice – such as we provide – to address multiple venue options is an important service to clients. Of course, in the right case, the right choice is not proceeding in one venue but in several.

FRAND issues are becoming more important in the United States and elsewhere, how do you see things developing over the coming years?

The challenge we face today with FRAND is achieving the right balance, particularly considering the incorrect view that implementers and innovators have no common interests because they do. Innovators need implementers to use, develop and market new technologies; and implementers need innovators to help invent new products and services which implementers can sell.

As with many aspects of patent law, we need a greater level of certainty. What is a methodology for calculating a fair and reasonable rate? Top down? Licensing comparables? What is non discriminatory? Can a national court set a worldwide FRAND rate? Are injunctions available against a non willing licensee? Where do border seizures fit in?

These and other questions are still being answered. Perhaps I am an optimist, but I believe greater certainty on these issues will lead to less inefficient friction in the system, less litigation and, hopefully, less hold out (my experience supports Assistant Attorney General Delrahim’s view that hold out is a much wider systemic problem than hold up).

With the coming of 5G and a much higher number and wider array of potential licensors and licensees, I think it would be terrific if we could look to international collaborations under the auspices of standard development organisations to discuss a rational approach to 5G licensing. Competition law prohibitions would likely need to be relaxed and some participants would need to find a renewed sense of good faith, but without a rational approach, all (except perhaps lawyers) will lose.

5G implementation would be a good vehicle to move FRAND issues to international dispute centres, hopefully with participants committed to a fair solution and not just one-off imposed resolutions. I must believe that in future we will get there because it is the best of only a few rational approaches.

If you were to make one prediction about the future of US patent law and practice, what would it be?

I think the United States will continue to move in a favourable way for patentees, and we will face less uncertainty on important issues. The United States will continue to recognise the importance of innovation to our economy and the need to better balance the rights of implementers and innovators. That trend will encompass many components, including:

Garrard R Beeney, co-head of Sullivan & Cromwell’s IP and technology group, is regularly recognised as a leading lawyer for his trial work and counsel to clients on global IP and licensing transactions and litigation matters. He has handled patent and IP matters before the US Supreme Court, the International Trade Commission (ITC), USPTO and federal district and appellate courts, and regularly advises on non-US litigation, particularly in the European community.