The future of 5G patent licensing

Most industry experts predict that licensing 5G patents will be more complex than in earlier generations such as 3G or 4G. The 5G standard will have more specifications, which can be combined but also used separately. Companies will therefore implement different 5G specifications depending on the specific 5G use or implementation (eg, a smartphone will use different 5G features from a car, refrigerator or medical device). As different 5G specifications are subject to different SEPs, it will be a challenge in licensing negotiations to define which patents will be needed and thus licensed in the final 5G standard implementation. Patent owners will have to find efficient ways to set up 5G licensing programmes for different uses. As such, it will be important to offer different pricing structures to accommodate this.

It is highly likely that 5G will not be licensed on its own, but rather in combination with other standards subject to patents. Figure 1 shows the number of declared 2G, 3G, 4G and 5G families by year of declaration. The data, provided by IPlytics Platform, reveals that the total number of patent declarations has increased dramatically since 2015 and will probably continue to do so in the next few years. Since 2018, most patent families have been declared to 5G specifications. Readers should keep in mind that the figure counts redeclared families for each standard generation; in other words, a patent family declared as 4G and 5G is counted twice – once for each standard generation. 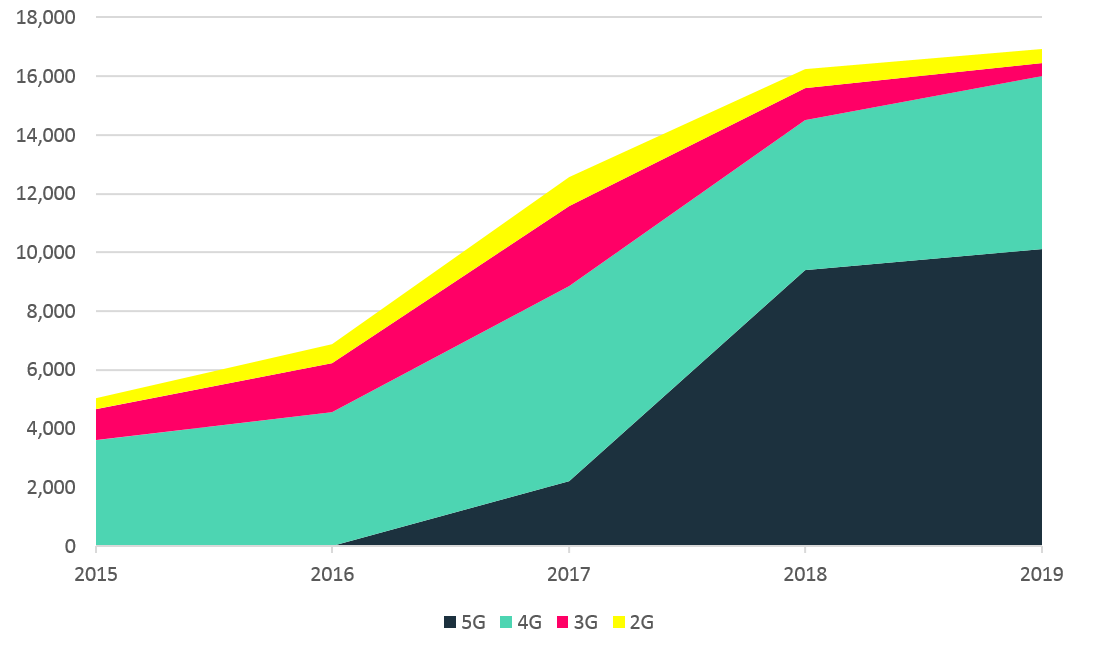 The result is similar for the annual number of submitted standards contributions provided by IPlytics Platform, submitted to 2G, 3G, 4G and 5G (see Figure 2). 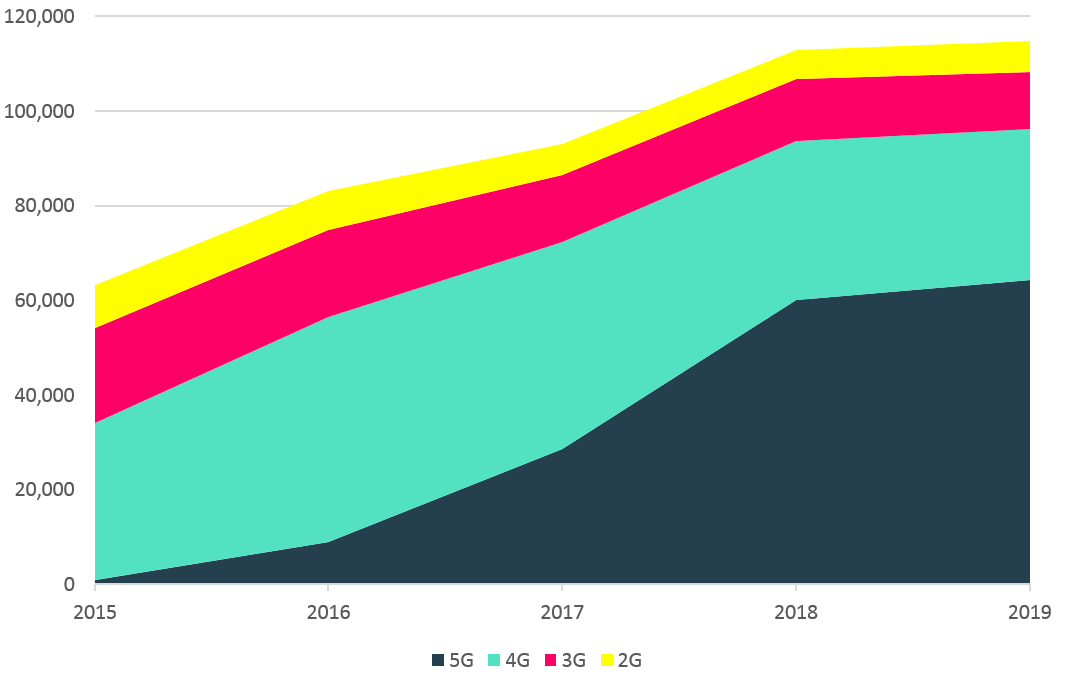 Both figures confirm that the number of declared patents, as well as the number of standard contributions, has increased sharply. This suggests that cellular communication standards advance quickly but become more complex at the same time.

Can patent pools solve the stickiness of SEP licensing?

The main rationale for patent pools is to solve the stickiness problem of licensing (eg, by saving transaction costs for both licensors and licensees). Considering that 5G will be used across multiple industries by a much larger number of companies (compared to the smartphone industry), transaction costs will inevitably increase. Here the goal of patent pools is to simplify licensing (eg, by providing a single contract for all licensors and eliminating the discussion about patent quality as all patent pool members will have to agree and commit to the pool’s terms and conditions). These terms and conditions define, for example, how royalty will be shared among patent owners. When the industry agrees to these terms and conditions, stickiness can be reduced. The success of a patent pool thus greatly depends on the number and size of patent owners that join and the licensees that take a license. However, joining a patent pool can be subject to a chicken and egg-type problem, as companies might be hesitant to join if no one else has yet.

At present, there is no 5G patent pool and a critical mass of licensors is needed to launch a successful one. Further, pools should be attractive for licensees with a differentiated pricing model.

As pool administrators promote the principle of a one-stop licence, some patent owners are hesitant. Even as a member of a patent pool, some sort of stickiness remains – especially when licensors do not agree to the terms and conditions of the pool licence yielding litigation in patent courts. Being a member of a patent pool but not being involved in the ongoing litigation of other members can create situations that are not always transparent and thus will not benefit the licensing strategy of all patent owners.

There will likely be different models of aggregation on both sides of the table. On the one hand, patent pools aggregate patent owners but, on the other hand, there are defensive patent aggregators (eg, RPX or the Allied Security Trust), which aggregate companies that need to license-in patented technologies.

SEPs in the auto industry: a fresh start or a clash of cultures?

The smartphone industry has a moving train problem. Contracts are already in place for the licensing of SEPs, which must be considered when setting up a new licensing program. The existing contracts create challenges and often limit flexibility in defining new terms and conditions. In the smartphone space, patent owners are typically licensors that also act as licensees. Patent owners often compete downstream in the product market. In other words, licensing contracts are negotiated among competitors. In the case of licensing SEPs for the automotive industry, the licensors are from the telecoms industry and do not compete with licensees from the auto industry. This makes licensing negotiations easier to some extent, as licensors act only as licensors and licensees act only as licensees. When licensing negotiations for 2G, 3G and 4G SEPs with automotive manufacturers started a couple of years ago, there were no licensing contracts in place. This fresh start allowed a certain flexibility compared to the smartphone world. However, looking at the telecoms and auto industries, there is still a clash of cultures when it comes to licensing mechanisms.

In the telecoms industry, SEPs are often licensed on the user equipment level. Consequently, licensing negotiations target the device manufacturer and, in some cases, royalties consider the net selling price of the final product.

In the auto industry, patents are usually cross-licensed on vertical levels and suppliers may incorporate IP rights into their component supply contracts. In addition, royalties are often based on a component selling price.

Most discussions about SEP licensing in the auto industry focus on a reasonable rate. SEP owners argue that access to patented standards that enable connectivity features increases the value of a car and thus royalty rates should be reasonable in comparison to the net selling price of the car. However, the auto industry claims that a reasonable royalty rate should be based on the price of the component in the car that provides the connectivity. Here, a reasonable royalty rate is critical – especially given that component prices have already been negotiated with suppliers for the upcoming years.

What are the challenges for future 5G licensing?

The licensing of SEPs in the smartphone industry is well understood and 5G licensing negotiations will be comparable to those of 3G or 4G. However, licensing 5G patents outside of the smartphone industry will be far more challenging. As the application of 5G will differ from industry to industry, licensing mechanisms will need to be more flexible and there is no one-size-fits-all model that will work. For example, connecting a refrigerator to other home appliances might be a much simpler application of 5G than installing 5G-enabled security features in a car that are crucial to avoid road accidents. As such, a uniform licensing model will not work. Instead, the 5G royalties for the refrigerator will likely need to be lower than those in the auto use case. While such flexibility is crucial, the industry must also find mechanisms that allow companies to aggregate and package the licensing of 5G patents to avoid stickiness. For real Internet of Things (IoT) applications, it is not feasible to discuss terms with each licensor individually. There must be an aggregated solution, which could be a patent pool or another mechanism to join licensing efforts.

Another challenge is the long tail of the market. 5G will be implemented in, for example, IoT applications and products produced and shipped by also small revenue companies (eg, a smart IoT start-up from Berlin with a €10 million revenue). Collecting royalties from tens of thousands of small companies will not be efficient if the royalty per company is too low. Patent owners will either have to bundle resources to chase all small 5G users or accept a certain number of free riders that stay under the radar and use patented 5G technologies without paying royalties.

5G use cases and the competition of standards

No one can predict how 5G will be applied in the various IoT use cases. End users will be the ones to decide where 5G will be used and if implementing 5G in, for example, a car will be a value add – especially when even 3G and 4G base stations are not yet available across all countries and regions. Someone who lives in a region where 5G will not be offered for the next 10 years may not need 5G connectivity in their car. However, a car may be used to travel to larger cities where 5G technologies are available and the owner may still want connectivity even though access is limited to certain regions.

Discussions about the competing standards 802.11p and V2X 5G will depend on the connectivity use cases of a car. Both standards have advantages and it remains to be seen which will be used more often. Competition on standards will also mean competition on price and thus on the royalties charged. Some experts feel that future cars will integrate both standards and use the standardised technologies for different use cases.