Following the fall of the Soviet Union and the formation of the Commonwealth of Independent States (CIS) in 1991, Azerbaijan, Armenia, Belarus, Georgia, Kazakhstan, Kyrgyzstan, Moldova, Russia, Tajikistan, Turkmenistan, Uzbekistan and Ukraine have all adopted national patent laws to protect inventions, including pharmaceutical products.

However, patent legislation is only one aspect of the legal regime that regulates pharmaceutical and agrochemical products. Another crucial aspect is a system for approving the manufacture and marketing of new products, which is generally administered by national state authorities.

The approval and registration of pharmaceutical and agrochemical products usually takes place between five and 10 years after the corresponding patent application has been filed. This substantially reduces the period during which the rights holder may profit from its patented invention. As it takes considerable financial expenditure to bring a new drug to market, this circumstance is extremely unfavourable for owners of pharmaceutical patents.

In order to afford the same monopolistic rights to holders of agrochemical and pharmaceutical patents as to holders of patents in other sectors, provisions for patent term extensions (PTEs) for pharmaceutical and agrochemical products have been introduced into the national patent laws of Azerbaijan, Armenia, Belarus, Georgia, Kazakhstan, Kyrgyzstan, Moldova, Russia, Turkmenistan, Uzbekistan and Ukraine.

The conditions and procedures relating to PTEs, as well as the scope of protection during the extended patent term, differ from country to country and are regulated by the national patent laws.

The PTE procedure was first introduced in Russia in 2003. It is currently regulated by Article 1363(2), Part IV of the Civil Code of the Russian Federation, which came into effect on January 1 2008, with the latest amendments introduced on January 1 2015. This article establishes a PTE of up to five years for a patent covering an invention relating to medicines, pesticides or agrochemicals whose use requires marketing approval.

In accordance with the amended patent legislation, a PTE is certified by a supplementary patent. This is granted with the claims containing the features of the patented invention and characterising the product for which the marketing authorisation has been issued.

In Armenia, the PTE procedure was introduced on December 8 2004 and is regulated by Article 4(4) of the Patent Law, which provides additional protection for up to five years for:

In accordance with Article 10(3) of the Azerbaijan Patent Law, which came into force in December 2009, a patent covering an invention relating to a product which must pass an administrative procedure or a process for manufacturing such a product can be extended by up to five years.

Article 1(3) of the Belarus Patent Law, which was adopted on December 16 2002, introduced a PTE of up to five years if it is necessary to obtain marketing approval to use the product in which the invention is incorporated.

In Georgia, the PTE procedure is set out in Article 5(5) of the Patent Law, which was last amended in 2010. The term of a patent covering an invention relating to a medical product which requires the consent of the competent authority to enter the Georgian market can be extended by up to five years.

In accordance with Article 5(3) of the Patent Law of Kazakhstan, which entered into force on July 16 1999, the term of a patent covering an invention whose use requires marketing approval may be extended for no more than five years.

Since 2003, Article 4(1) of the Patent Law of Kyrgyzstan has provided for an extension of the term of a patent covering pharmaceutical inventions by up to five years.

The Moldavian Law on the Protection of Inventions of March 7 2008 states that the owner of an invention patent for a pharmaceutical or phytopharmaceutical product can apply for a supplementary protection certificate (SPC) after receiving marketing approval, for the parts of the patent corresponding to the marketed product.

Article 4(2) of the Patent Law of Turkmenistan, adopted on November 14 2008, introduced the PTE procedure. The validity of a patent covering an invention directed to a medicine, pesticide or agrochemical whose use requires marketing approval may be extended by up to five years.

Article 6 of the Ukraine Law on the Protection of Rights to Inventions and Utility Models, adopted on June 1 2000, provides for extensions of up to five years for patents covering inventions relating to drugs designed to protect animals and plants whose use requires marketing approval.

In accordance with Article 5 of the Patent Law of Uzbekistan, which was adopted on October 2 2002, the term of certain invention patents may be extended by up to five years by the Patent Office.

Tajikistan makes no provisions for PTEs.

In Armenia, Belarus, Kyrgyzstan, Moldova, Russia and Uzbekistan, PTE applications must be submitted within six months of receipt of the first marketing authorisation or the patent grant date, depending on which expires later.

In Russia, the concept of the ‘first marketing approval receipt date’ was clearly defined in the IP Court’s decision in Abbott v Russian Patent Office (Case IPC-81/2014, October 9 2013) as “the date of the actual receipt of the first marketing authorisation by the applicant”.

In Georgia, PTE applications must be submitted within one year of the first marketing authorisation issue date.

In Ukraine, PTE applications must be submitted at least six months before the patent expires.

In Kazakhstan, PTE applications must be submitted within the last (ie, the 20th) year of a patent’s term of validity.

In Azerbaijan and Turkmenistan, PTE applications can be submitted at any time during the patent’s validity.

In all mentioned CIS countries, the PTE application can be filed by the patent holder only.

However, there is no prohibition on filing PTE applications if the patent holder and the owner of the marketing authorisation are different entities.

In order to initiate the PTE procedure, the applicant must provide documents confirming the marketing approval for its product in the relevant country and containing information about the product’s structure and composition, sufficient that an expert could then attribute the invention to the product for which the marketing authorisation has been issued.

With regard to the marketing approval, a notarised copy of the first registration certificate issued in the relevant country must be provided, stating:

Unfortunately, none of the existing national PTE regulations defines exactly what the ‘first authorisation’ is.

If the patent relates to a compound per se, the first marketing authorisation is undoubtedly the authorisation that was first issued for a product comprising this compound as an active agent in any dosage form and, if the substance was manufactured in Russia, the approval for its manufacture.

In Russia, if the patent covers a group of compounds characterised by the Markush structure, the first marketing authorisation issued for any compound of the group is considered to be the first marketing authorisation with regard to the PTE procedure. This approach was adopted in the IP Court Presidium’s decision in Aventis Pharma v Veropharm (Case IPC-155/2014 of December 8 2014).

In addition to these marketing authorisations, data should be provided about the structure of the active agent which is designated in the registration certificate by the INN.

Any information about the chemical structure of a compound with a registered INN (eg, the structure published in the World Health Organisation’s International Non-proprietary Names for Pharmaceutical Substances) can be submitted. Further information from reference books (eg, the Merck Index) may also be used, as well as information from documents published on the US Food and Drug Administration website.

In Azerbaijan and Kazakhstan, a copy of the document proving the filing date of an application for a product state registration is also required.

As a rule, the submission of these documents should suffice for a patent holder to obtain a positive decision on its application for a PTE for a patent relating to a compound per se.

However, if a patent covers a product which is characterised by some physical characteristics (eg, the crystalline form of a known substance characterised by X-ray spectrum or a dosage form characterised by a specific release profile of an active agent), the patent holder must submit evidence that the active agent of the approved product is used exactly in the indicated specific crystalline form, or that the approved dosage form has a release profile of an active agent identical to that of the patented product. As a rule, the evidence required in such cases is far more complicated and the necessary documentation far more complex.

In addition to these documents, combinations of features corresponding to the marketed product shall be indicated for each granted claim selected for the PTE procedure.

In Belarus, Moldova and Russia, the PTE is calculated as the period from the filing date of the patent application (for international applications, this would be the international filing date) to the first marketing authorisation receipt date, minus five years.

In Armenia, Georgia, Kyrgyzstan, Turkmenistan, Ukraine and Uzbekistan, the PTE is calculated as the period from the filing date of the patent application (for international applications, this would be the international filing date) to the first marketing authorisation receipt date.

In Azerbaijan and Kazakhstan, the PTE is calculated as the period from the filing date of an application for a product state registration to the date of the first marketing authorisation receipt.

The maximum PTE in all CIS countries is five years.

In most CIS countries, claims or patents that are eligible for PTEs are restricted to those directed to a product, such as a compound, a pharmaceutical composition or a combination of these.

In Azerbaijan, patents or claims must be directed to the process for preparing the product in question.

In Armenia, patents or claims must be directed to the process for preparing the product in question, as well as any intermediates necessary for its preparation.

Methods for treatment patents or claims are not considered eligible for PTEs in any CIS country.

In Russia, until January 1 2015 claims that were eligible for PTEs were maintained in full, even if they did not cover a single invention, but were directed to a group of inventions (eg, to a group of compounds defined by the Markush structure).

In accordance with amendments introduced on January 1 2015, PTEs are now restricted to marketed products.

In Belarus and Moldova, the scope of PTEs is restricted to marketed products only.

In Kazakhstan, Kyrgyzstan, Georgia, Turkmenistan, Uzbekistan and Ukraine, claims in relation to which the term of the patent can be extended are maintained in their full scope.

In accordance with the current practice in all CIS countries, except for Moldova, more than one patent may be extended on the basis of the same marketing authorisation.

In Moldova, only one patent can be selected for a PTE.

PTE procedures are set out in the Eurasian Patent Convention and are available in the following signatory states: Russia, Belarus, Kazakhstan, Kyrgyzstan, Azerbaijan, Armenia and Turkmenistan.

Tajikistan does not provide for PTEs.

It is possible to apply for PTEs for Eurasian patents in the territory of one signatory member state on the basis only of the marketing authorisation issued in that member state.

The introduction of PTE provisions into the national laws of most CIS countries is a significant step towards harmonising national patent laws with international treaties and ensuring that patent holders can use their rights more effectively in the pharmaceutical and agrochemical sectors. 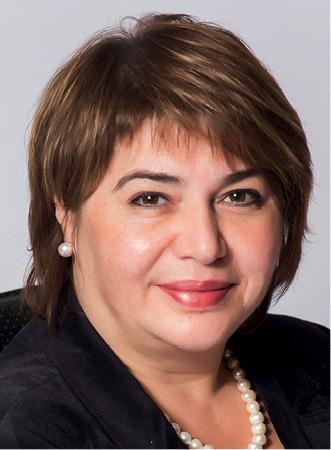 Elena Nazina is a partner in Gorodissky & Partners and heads the chemical and life science department. She graduated from the D Mendeleyev University of Chemical Technology in 1985 as a chemist, specialising in chemistry and the technology of organic synthesis. Ms Nazina deals with patents in the fields of general organic chemistry, biologically active substances, medicine and pharmaceuticals. Her areas of particular experience include low-molecular organic compounds, intermediate products and colourants, methods of curing, prevention and diagnostics. Ms Nazina’s practice includes consulting, prosecution and further protection of IP rights in these areas. She has substantial experience of oppositions and appeals before the Russian and Eurasian patent offices, and is deeply involved in a number of litigations.