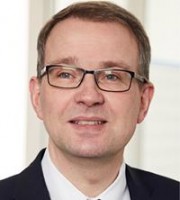 Veit Peter Frank is a partner of HOFFMANN EITLE’s electrical engineering group and is based in the firm’s Munich office.

Mr Frank’s practice focuses on exami­na­tion, opposi­tion and appeal proceed­ings before the EPO and the German Patent and Trade­mark Office. He represents multinational corporations and small and medium-sized enterprises alike in diverse areas, including telecoms, radio-frequency power electronics, vehicle electronics and control of electrical motors, and is responsible for handling large patent portfolios for some of these clients.

In addition, Mr Frank advises clients in nullity cases, litiga­tion and prelim­i­nary injunc­tion proceed­ings – especially in the areas of mobile commu­ni­ca­tions, digital and analogue circuits and systems and antenna technology.

Mr Frank presents at conferences on IP law both in Germany and abroad, and frequently travels to Japan where he has a strong client base.