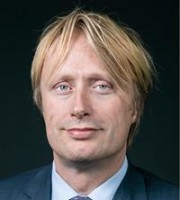 Paul J Hylarides is a European patent attorney and partner at Arnold & Siedsma. Working in the firm’s physics and electronics department, Mr Hylarides is involved mainly in the protection of inventions. He has specific expertise in the fields of information and communication technology, software, medical applications, optics, seismic data processing, nanotechnology (including semiconductors) and mechanics.

In addition, Mr Hylarides has a great deal of experience in conducting opposition procedures at the European Patent Office, and in the Dutch courts in patent nullity and infringement proceedings. He is extremely talented in conducting oral proceedings – his vast powers of persuasion have ensured him success in numerous national and international litigation cases.

Mr Hylarides believes that not only should advice be excellent from a technical and legal point of view, but the economic aspects must not be forgotten either. Clearly, advice ought to be commercially useful to the client too.

Mr Hylarides began his career as a patent attorney at Arnold & Siedsma in 1996, where he worked as a European patent attorney until 2007. Between 2007 and 2010 he was a partner at another international patent office, before returning to Arnold & Siedsma as a partner. That year, Mr Hylarides opened a new branch in Eindhoven – traditionally the centre of Dutch manufacturing and now also known as a European high-tech region – in order to serve the growing numbers of clients in the south of the Netherlands in the best possible way. He was a member of the executive committee at Arnold & Siedsma from 2012 until 2019, the last five years as chair.