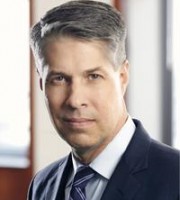 David R Marriott is a partner in Cravath, Swaine & Moore LLP’s litigation department. Mr Marriott has tried, argued and litigated IP and other complex commercial matters in both state and federal courts across the country. Mr Marriott has represented a number of major pharmaceutical and technology companies, including Mylan, IBM, Novartis, Alcon Laboratories, Qualcomm, Bristol-Myers Squibb, Eli Lilly and AT&T.

Mr Marriott is representing Quibi, a short-form streaming start-up, in consolidated patent infringement and trade secret litigation against Eko relating to Quibi’s use of its ‘Turnstyle’ video display technology. He recently represented Qualcomm in two patent infringement actions against Apple before the US International Trade Commission seeking to bar iPhones containing non-Qualcomm wireless modem chips from entering the country. Both cases were ultimately resolved by a global settlement between the companies.

Mr Marriott has also represented Merck Sharp & Dohme as plaintiff in three separate patent infringement actions seeking to enjoin the marketing and sale of generic versions of Merck’s antifungal agent, Noxafil, as well as Juno Therapeutics in a lawsuit filed by City of Hope (COH) alleging Juno violated an exclusive licence agreement to certain COH patents. He also represented Mylan in a patent infringement suit over Teva Pharmaceuticals’ development of a generic form of Mylan’s respiratory drug Perforomist. Following a seven-day bench trial, the court upheld the validity of Mylan’s patents and enjoined Teva from marketing a generic version of the drug until Mylan’s patents expire. The decision was affirmed on appeal.

Mr Marriott is a fellow of the American College of Trial Lawyers and the International Academy of Trial Lawyers, an adjunct professor at the New York University School of Law and a lecturer in law at the Columbia University School of Law. He has been recognised as a leading lawyer by numerous professional publications, including Benchmark Litigation, The Legal 500 US and Lawdragon.

Mr Marriott received a JD from the New York University School of Law in 1994 and a BA from Brigham Young University in 1991.