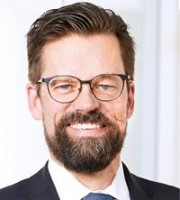 Mr Becher has broad experience in European and German patent, design and unfair competition law and specialises in adversarial proceedings before patent offices and the German courts. He regularly argues cases before the EPO Boards of Appeal and has obtained and been involved in several significant patent-related decisions of the German Federal Court of Justice. Mr Becher also maintains a steady patent prosecution portfolio.

In consultation, Mr Becher focuses on the technology and factual issues underlying clients’ particular problems and on their business interests. He gives practical advice which permits clients to assess the business impact of their legal problems.

Mr Becher studied general mechanical engineering at the Technical University in Aachen and wrote his final thesis on rapid prototyping in product development at the Massachusetts Institute of Technology and the Fraunhofer-Institute for Production Technology. He joined HOFFMANN EITLE’s Munich office in 1996, qualifying as a German patent attorney in 2000 and as a European patent attorney in 2001. In 2012 he started HOFFMANN EITLE’s Dusseldorf office, which he continues to head. In 2016 he obtained a Higher Courts Litigation Certificate from Nottingham Trent University, which satisfies the requirements for qualification as a patent attorney litigator in England and Wales.

Mr Becher is bilingual in German and English and fluent in French. He frequently presents on IP issues to diverse audiences in these languages.