IAM and ktMINE have joined forces to create the IAM/ktMINE US Patent 100 – a list of the 100 entities with the biggest active US patent portfolios. Although US companies make up most of this year’s group, Asian companies hold most of the patents

The IAM/ktMINE US Patent 100 lists the entities that as of January 1 2018 owned the 100 largest patent portfolios of granted, in-force US patents and pending patent applications. This data was collected and aggregated from ktMINE through its IP data and analytics platform.

The data was gathered from sources such as the Securities and Exchange Commission (SEC), US Patent and Trademark Office (USPTO), European Patent Office, World Intellectual Property Organisation (WIPO), System for Electronic Document Analysis and Retrieval, Public Access to Court Electronic Records, other regulatory bodies and hundreds of news sources to form the most comprehensive repository of IP data available.

A quick glimpse at the top of the IAM/ktMINE US Patent 100 list reveals many familiar entities: Samsung, IBM and Canon have the top three largest portfolios, with Intel and Microsoft rounding off the top five.

Collectively, with over 225,000 assets, the top five own more assets than the bottom third combined. In the top spot, Samsung holds over 75,000 granted US patents, while at number 100 Continental AG holds just 4,056.

Those in the top 10 have a history of using their developed IP resources to successfully execute business strategies. It is obvious that conglomerates and consumer electronics powerhouses edge out many legacy industries (ie, heavy manufacturing, energy and pharmaceuticals), where patent activity has begun to wane.

Companies catering to consumer electronics, information technology, computing and semiconductors make up almost half of the spots on this list. Of those in the top 20, all market products in these industries.

From a relative innovation perspective, we analyse the ratio of patent application publication activity in 2017 and compare this to each entity’s overall application portfolio. Standout companies are those with recent innovation activity, which is highlighted by higher ratios.

Brother published almost 60% of its patent applications within the last year, indicating a definitive ramp-up in patent activity and possibly signalling that it is on the lookout for new technologies.

With such tremendous filing numbers coming from entities such as Fujifilm and HP, the three-dimensional printing and imaging space may also be a segment that is ripe for innovation.

From the same perspective in the automotive space, both Honda and Hyundai are beefing up their technology pipeline, with a ratio of about 50% each. Ford is not far behind, boasting a 46.6% ratio.

While the potential of crafting a truly autonomous vehicle lingers in the future, many traditional automotive companies have needed to innovate in areas beyond their expertise (eg, computing, electronics and light detection and ranging (LIDAR) systems).

As the lines between business segments become more blurred, it is interesting to see that traditional automotive companies continue to innovate, even as technology companies become direct competitors.

This year, six of the top 10 entities filing patents in the United States are from Asian conglomerates. This is unsurprising, as the US market still claims a high return on investment. Among the entities listed in the IAM/ktMINE US Patent 100, those from Asia own more granted, in-force US patents than US entities do – by more than 30,000. The vast majority of these entities are from Japan (ie, Canon, Panasonic, Sony and Hitachi).

Though Asian entities own the majority of US assets, their ownership is consolidated to fewer key players. South Korea’s Samsung takes the top spot and probably will for the foreseeable future. Even though IBM continually outfiles other companies, its assets are also ageing; in addition, it is known for abandoning a number of its patents relatively early in their lifetimes. As Big Blue’s assets grow older, it will have to innovate more (or acquire more patent assets) to keep pace.

Very few of the entities in the listing hail from China, with just two in the top 100: Huawei and Lenovo. This may reflect alternative patent strategies. Most consumer goods manufacturers in China are dominant in the Chinese market, yet have a much smaller share of the US market and thus have fewer reasons to file in the United States. However, the future could see changes in countries of origin: this year, 45 of the top 100 companies are from the United States, but it is likely that filings from other regions will overtake those from the home front, especially as legacy patent filers lose ground. 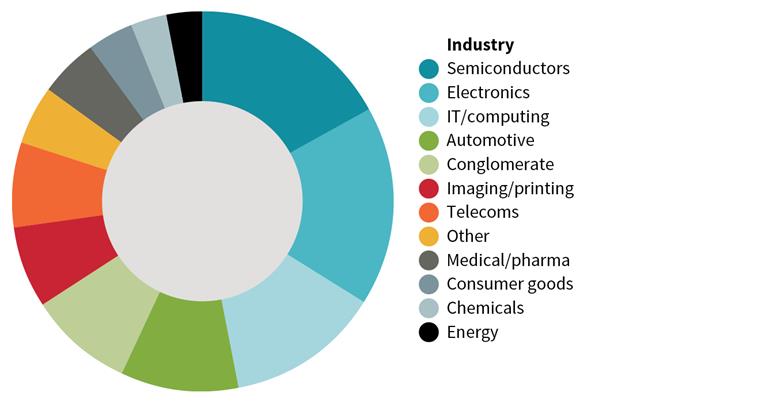 M&A activity factors strongly in the positioning of the top 100 companies; some of the heavy filers are being outpaced by acquisition.

As an example, over the last several years Google has managed to move itself into a top position through a combined effort of both filing and acquiring patents for sale. Dow and Dupont, two large chemicals companies, have merged to become one behemoth. Verizon’s acquisitions of AOL and Yahoo! put it in closer IP contest with AT&T, further consolidating the top 100 list.

Even medical pharmaceuticals could be ready for a shake-up and the world may be anticipating just that. What disruptions will Bezos, Dimon and Buffet bring to this space with their recent announcement that Amazon, JPMorgan Chase and Berkshire Hathaway are all entering the healthcare market?

Patents and applications that have expired, been abandoned or have been otherwise unmaintained are excluded from this dataset.

The data pulled for this publication is current as of January 1 2018.

ktMINE technology aggregates each granted patent and application to its corresponding corporate tree in order to create the most up-to-date and complete portfolio. Each entity is designated by the location of its corporate headquarters for supplementary analysis.

It is possible that no industry has seen more M&A and reorganisations than the semiconductors space. In the last few years alone, the market has witnessed several high-profile acquisitions: NXP and Freescale consolidated in 2015, along with Qualcomm and CSR, followed by Avago and Broadcom in 2016 and then Renesas and Intersil in early 2017. Pending the delayed acquisition of NXP by Qualcomm, not to mention Broadcom’s recently blocked bid for Qualcomm, the number of players in the semiconductor space is rapidly shrinking.

Reorganisations of patent portfolios may spread out the number of assets but many spin-offs and joint ventures will still have sufficient patent assets to protect them from litigation.

Big year for the United States

As the world continues to wrap its head around the changing state of affairs in the United States, many companies are contemplating strategies that consider other patent venues. With its developing legal infrastructure, China is one example of a nation doing its best to show itself as a patent-friendly domain worthy of consideration. Patent filing rates here are explosive and the trumpeting of injunctions is attracting litigation action.

Filing rates in the United States hinge on corporate patent strategies, all of which depend on market demands and case law affecting the value of patents. It could be that 2018 proves to be a pivotal year in this regard. The decision in TC Heartland LLC v Kraft Foods Group Brands LLC has not completely muted patent litigation in the United States but it has made plaintiffs think twice. Oil States Energy Services LLC v Greene’s Energy Group, LLC – which is currently being considered by the Supreme Court – is positioned to address the constitutionality of inter partes reviews, which may completely upend the Patent Trial and Appeal Board (PTAB). Some question whether the PTAB process is devaluing issued patents and, subsequently, disincentivising many from spending limited resources on innovation and the patent process.

The filing rate in the United States, much like that in China, continues to run unabated. More specifically, wireless technologies remains an active space. While players such as Nokia shed assets, others such as Broadcom maintain an appetite for acquisition.

Yet despite the ambiguities brought on by legislation, case law and regional developments, the United States will still play a major role in the patent strategy of any entity, if only because it continues to be the largest economy in the world.