There has been plenty of movement in the latest edition of IAM and MDB Capital Group’s annual listing of the world’s largest portfolios of active US patent assets. But it remains the case that a handful of companies still rule the roost

Two years ago we introduced our annual report, the US Patent 100, which identifies the entities owning the most granted, in-force patents in the United States. The list includes patent application growth rates as well as a bibliometric measure of the rate at which other companies are citing each portfolio, called Tech Score. In this article, for the third year in a row, we update that data for 2014 and reflect on the changes.

This data comes from PatentVest – a fully integrated analytic and reporting platform developed from the ground up with over 75,000 man hours invested by MDB Capital Group. PatentVest measures, scores and ranks over 4,000 public and private companies in relation to their US patent holdings, unifying over 4 million granted US patents and over 2 million US patent applications on file. These man hours have been spent cleaning data directly from the US Patent and Trademark Office (USPTO) and adding outside information on ownership and subsidiaries based on Securities and Exchange Commission (SEC) data. The data used for this report was current as of December 15 2014.

A normalised list of public and private patent holders, aggregated by hand with all publicly available subsidiary information.

US patents granted and in force, including utility, design and plant patents. Data is sourced directly from the US Patent and Trademark Office assignments database and is aggregated for name variations and subsidiary data. Patents that are expired, unmaintained or withdrawn are removed from this count.

A value calculated from the rate at which the utility patents in a portfolio are being cited and normalised against a cohort group of patents selected by age. The strength of this method is that it does not depend on the absolute number of citations and ignores self-citations. A high score generally points to strong positioning of a patent portfolio in an important technology area. However, a weakness of this score is that if an area is too new, sufficient citation data typically does not exist.

This important IP growth metric is the year-on-year compound annual growth rate (CAGR) of the number of patent applications filed during the last three years. This is based on the cumulative count of published applications and is not adjusted for whether a patent has issued corresponding to that application. Also, this is based on the publication date, not the filing date, which creates an average 18-month time lag for this metric. Still, this can yield crucial insight into the nature of a company’s IP development and its competitive relevance.

This data does not rank patent portfolio values outright, although some of these metrics can be used as secondary indicators of innovation. The opinions presented in this article are not intended to be, and should not be construed as, legal or investment advice. A company’s inclusion in this article is not to be construed as an investment recommendation for such company’s securities.

The top five patent holders in 2013 were Samsung, IBM, Canon, Panasonic and Sony. This remained unchanged in 2014, with these five companies continuing to dominate the US IP market. Within this group, Samsung widened its lead over the rest of the field, adding over 7,500 new US grants in 2014, compared to an approximate range of between -300 and 4,100 for the number two through five players. Microsoft added nearly 3,000 grants in 2014 and maintained its spot at number six on our list. The three-year compound annual growth rate (CAGR) for patent applications filed by this group remained in the same range of between 9% and 12% range as last year, indicating continued robust patenting activity.

Five entities moved up the ladder and made it onto the US Patent 100 list in the last year: Korea’s Electronics and Telecommunications Research Institute (83), Airbus Group (88), Verizon Communications (93), Rohm (95) and Monsanto (99). Most of these new entrants are there due to sustained IP development, but we note a couple of additional points below.

Airbus Group is a new entity, formed in January 2014 from the reorganisation of the European Aeronautic Defence and Space Company, which was ranked 104th on our list last year. The 20% growth in the number of US granted patents between the company last year and Airbus Group this year looks to be roughly half due to organic growth, with the rest resulting from corporate actions surrounding the reorganisation.

Rohm jumped to number 95 on this year’s list from number 161 last year, on the back of a 90% increase in granted US patents. This large change was a result of Rohm’s acquisition of Oki Electric’s semiconductor business (Lapis Semiconductor) and the reassignment of relevant patents.

The five new organisations appearing on the 2014 list contributed to pushing the following five off: Sanyo, Oki Electric, Sanofi, Novartis and Qimonda AG. Oki Electric fell off the top 100 list from a rank of number 97 last year as a result of the transaction with Rohm.

Movement up and down the top 100

As the US Patent 100 started with a higher number of minimum grants in 2013, some entities’ rate of growth of in-force patents was not high enough to keep them on this year’s list (see Table 2).

The top three entities that climbed up the rankings had an average of 1,112 patents granted during 2014, while the top three companies with a drop in ranking had an average of 332 patents granted in 2014. This helps to illustrate how much investment continues to be made by top patent owners to maintain their dominance. (Rohm and Oki were excluded from this analysis as the sale of Lapis was the overwhelming factor in the change of their rankings from 2013 to 2014, not organic filing activity.)

Best of the best

Our stand-out portfolios list highlights companies with assets that rank among the top in all of our reported categories. Of the over 140,000 entities that have been assigned at least one US patent, these 10 companies stand out in terms of grants (over 4,200), CAGR (13% and over) and Tech Score (0.92 and up), implying that they are the owners of the largest, fastest-growing and most industry-recognised patent portfolios in the world.

Like last year, we needed to raise the bar again slightly, as the minimum number of grants to be eligible was over 4,200 – compared to 3,800 last year. We maintained the CAGR minimum at 13% and Tech Score of 0.88 and up. The number of companies eligible for this list actually increased by one this year to a total of 10. Since it is difficult, especially with large portfolios, to have both sustained growth (CAGR) and sustained impact (Tech Score) over time, the members of this list represent a commitment to excellence in the pursuit of differentiated IP assets.

When reviewing this year’s list, we note the absence of Advanced Micro Devices, GlobalFoundries and Hon Hai – all companies that were on the stand-outs list last year. Each missed the cut this year due to a drop in Tech Score. This does not mean that these companies have experienced a sudden degradation in the quality of their portfolios; it simply reflects a slight shift in their Tech Score metric. 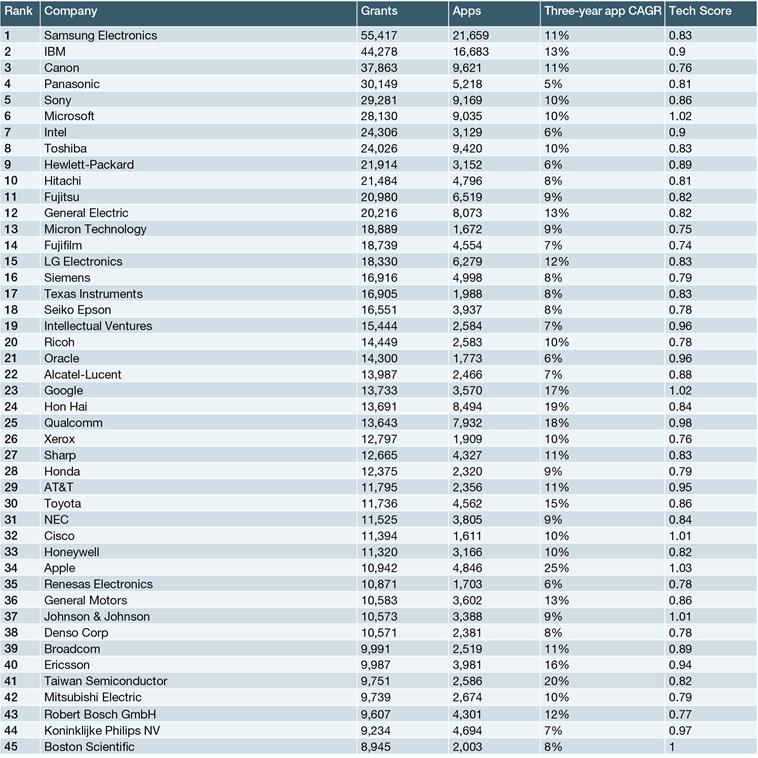 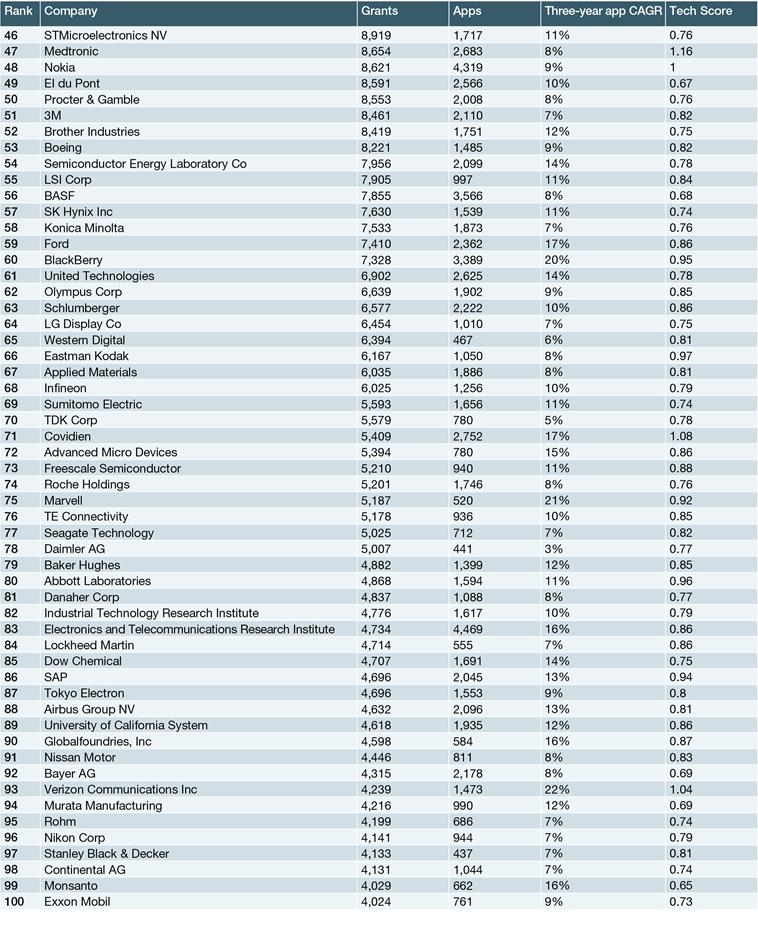 The US Patent Elite 100 List is a ranking of each company’s grants. The company data is a normalised list of public and private patent holders, aggregated by hand with all publicly available subsidiary information. The grant data includes all US patents granted and in force, including utility, design and plant patents. Data is sourced directly from the US Patent and Trademark Office assignments database and is aggregated for name variations and subsidiary data. Patents that are expired, are not maintained or have been withdrawn are excluded from this count. All of these numbers were current as of December 15 2014.

The US Patent Elite 100 provides actionable intelligence for the purposes of:

The list is valuable because of the important new information it provides to investors, companies and policy makers. Much like an investment index, this information provides a unique view into the companies listed and the industries they represent.

Depending on the stage of a corporation’s development, intellectual property may be a primary value driver. This list provides insight as to whether a company’s portfolio has been growing and the impact that those assets appear to be having within their technology verticals.

The US Patent 100 enables portfolio benchmarking and deeper analysis of IP strategy within and across industry verticals.

Out of over 140,000 entities holding at least one granted, in-force US patent, 371 companies own portfolios of over 1,000 assets, representing over 55% of the US total. The top 100 patent holders own over one-third of all US patent assets. Within the four primary uses of a patent portfolio, various monetisation models exist, each of which is important to enabling commerce and technology development.