In our breakdown of all entities that own at least 1,000 US patents, Samsung keeps a tight grip on the top spot but a wide decline in the number of applications suggests that many of the world’s leading rights holders are re-evaluating their invention pipelines

This year marks the third annual IAM/ktMINE US Patent 1000 analysis, which lists all the entities that own at least 1,000 granted, in-force US patents. This data is collected and aggregated by ktMINE through its IP data and analytics platform. ktMINE gathers IP data from sources and regulatory bodies including the US Securities and Exchange Commission (SEC), the USPTO, the EPO, WIPO, the System for Electronic Document Analysis and Retrieval, and the Public Access to Court Electronic Records, along with hundreds of news sources. It then links these data sets to form the most comprehensive repository of IP data available.

Moreover, there was a lot of movement in the list this year, as 145 entities moved up in the rankings, while another 36 entered the line-up for the first time. We also saw 173 entities slipping in the rankings, with another 35 dropping out of the list entirely. As a matter of observation, only 14 entities remained in the same position, including the top four: Samsung, IBM, Canon and Microsoft.

There were departures from the list in 14 of the 17 industries that we track, with particular emphasis on those that have traditionally enjoyed high IP activity: semiconductors, electronics and telecoms (six, six and four departing entities, respectively). In contrast, the latest additions span only 10 industries, with financial institutions representing 10 of the new entrants, implying that patent holdings are becoming more concentrated in fewer segments.

The entities in the IAM/ktMINE US Patent 1000 list control 1.934 million patents, relatively flat (0.3%) year on year from the 1.928 million in 2018. More striking are the applications: this year, entities control 372,000 applications, down 22% from 2018. Most segments experienced double-digit drops in application filings, with computing and software standing out for a 31% decline. Only the financial segment experienced a year-on-year gain in application filings (up 70%).

You can view the table as a PDF here.

To create this list, ktMINE analysed patent publications to determine granted and pending patent applications in good standing with the USPTO. Granted patent data includes utility patents along with design and plant patents. Patents and applications that have expired, been abandoned or are otherwise unmaintained are excluded from this data set. The data pulled for this publication is current as of 1 January 2020. ktMINE technology aggregates each granted patent and application owner to a corporate tree in order to create the most up-to-date, accurate and complete snapshot of each company’s patent portfolio. Each entity is designated by the location of its corporate headquarters for supplementary analysis. In addition, we include the ratio of patent application activity to consider the rate of an entity’s innovation. These are based on each entity’s patent publication activity in 2019 relative to its overall portfolio of granted patents.

A quick look at the statistics

The top 10% of entities control 840,560 granted US patents, a fall of 6.1% from 2018. The top 10% also hold 154,095 US applications, down by 26%, so the drop in application filings of the large portfolio holders is more pronounced than the 23% seen throughout the entirety of the list. Further observations confirm that this drop is not contained within any one particular region nor confined to any particular business segment.

Electronics was once again the largest segment in 2019, holding 24% of US grants in the list. The semiconductor, computing and software, automotive and financial sectors round out the top five.

With 10 new entities, the number of financial institutions on the list has nearly doubled. As we noted last year, there has been a tremendous transfer of intellectual property to financial entities and this sector is the only one to exhibit increases in both patents (up 212%) and applications (up 70%). The 22 finance entities now control over 111,000 patents and over 14,000 applications.

More expertise in-house and from external providers has given financial institutions more confidence to invest in patents. It is also worth noting that as the economic crisis related to covid-19 continues to unfold, patents – which are often viewed as counter-cyclical assets – might prove to be an increasingly attractive investment proposition. 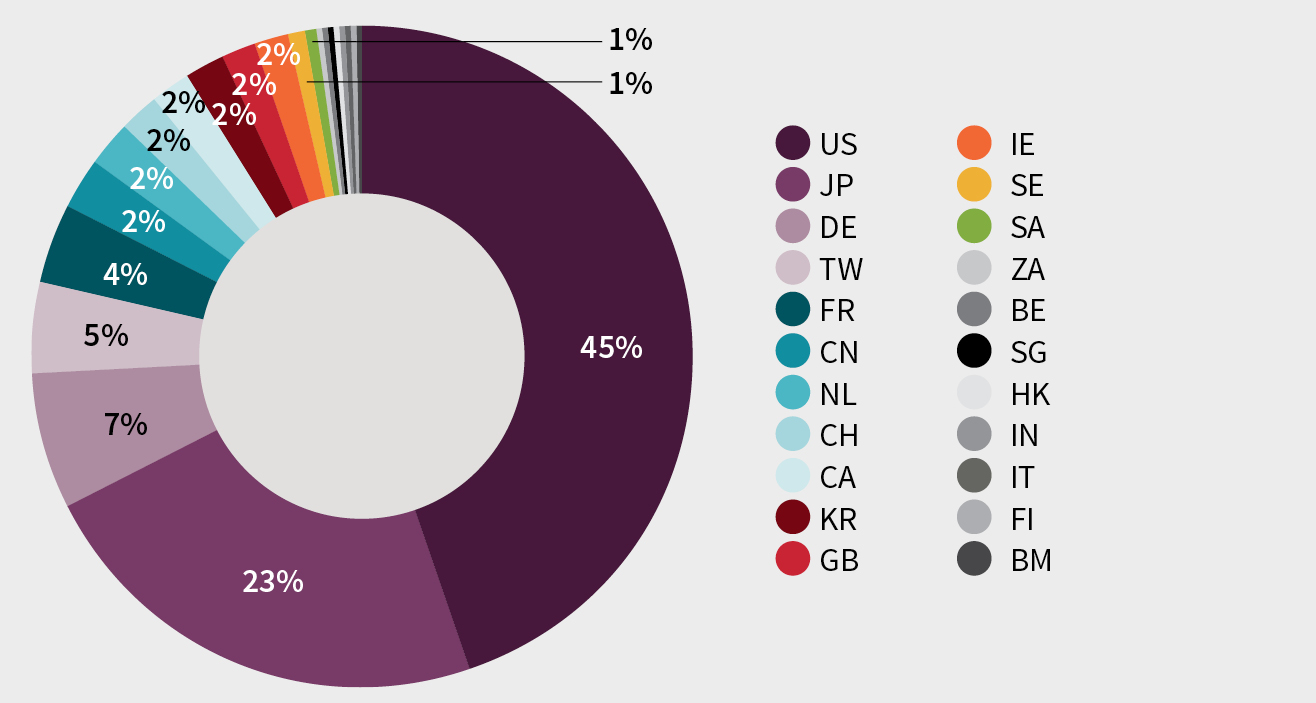 The aerospace and defence segment turned in a reasonable year with the number of patents increasing by 13% from 2018 – perhaps a reflection of economies shifting from globalisation strategies towards more domestic efforts. Still, even though granted patents were up for this sector, applications numbers were down by 16%.

The automotive sector (at 5%) and medical/pharma sector (at 3%) experienced modest upticks in patent holdings. However, these spaces saw drops in application filings that are likely to reverberate in the coming years (down 15% and 18%, respectively).

On the other side of the spectrum, the semiconductor, imaging/printing, industrial and telecoms sectors have seen reductions in their patent holdings (down 9%, 9%, 8% and 8%, respectively). These are mature IP markets that have already been experiencing patent downturns. A combination of unfavourable case law, stagnant legislation, patentable subject matter and other issues continues to make traditional assertion or licensing strategies difficult. For entities such as telecoms, filings have plateaued and the commercialisation of newer technology (eg, 5G) has not developed sufficient momentum to encourage significant increases in IP holdings.

The number of Japanese entities increased by two, but they control 6% fewer patents and 22% fewer applications than they did a year ago. This may suggest that their older portfolios are continuing to be divested with fewer new innovations to take their place.

Europe added four more entities to its roster in 2019 and holds 2.2% more patents, but saw the most dramatic drop in applications (down 27%). The standout is Ireland, which owns 10% more patents than it did a year ago – the greatest gain of any European country – but holds 21% fewer applications.

Interestingly, and in contrast to overall trends, IP owners from countries outside the major regions have increased both the number of patents and the number of applications that they hold. The four entities from India, Saudi Arabia and South Africa admittedly represent a small fraction of the total (0.4% of worldwide patents and 0.6% of worldwide applications); however, this observation may be a small indication of where innovation is growing. Collectively, these countries registered year-on-year gains of patents and applications (up 29% and 16%, respectively).

Perhaps the most interesting shift among the largest patent owners relates to applications. A closer look at the numbers shows that of the applications held in 2018, 32% were filed within the current year. In 2019, this percentage had increased to 41%.

At the industry level, the semiconductor segment (49%) and the automotive segment (48%) are outpacing the average, while the portfolios held by the financial (33%) and entertainment (34%) segments are less current.

Even though the number of applications is down, certain industries are continuing or maybe even accelerating their rates of innovation. Rather than perceiving the decline in applications as a lull, it may be better explained as a strategic culling or a retooling effort as part of the natural innovation cycle.

Even at the country level, we notice differences. For example, countries such as Taiwan (52%), China (45%) and Japan (45%) are collectively outpacing the average. Meanwhile, countries such as France (32%) and the Netherlands (36%) might be struggling to rekindle innovation while simultaneously facing declines in assets.

Generally speaking, 2019 was a strong year for the financial sector. Most notably, Wilmington Trust exploded up the rankings by a whopping 321 positions (the biggest rise in the list this year) to 13th position; Deutsche Bank rocketed up 167 spots (to 91st); and the Bank of New York Mellon, a new entrant, debuted at number 40.

Outside of finance, the energy industry saw Saudi Arabian Oil move up 88 positions (purely through organic filings). The auto sector saw activity with Audi rising 86 positions due to steady filing activity between 2015 and 2017 in electric drive technologies.

However, the auto industry also saw some notable falls, with Delphi Technologies slipping 134 spots – the biggest fall this year. The decline can be explained through a series of events stemming from its spin out from Delphi Automotive, resulting in the divestment of a cache of assets to Aptiv PLC. However, this does not reflect the pending acquisition of Delphi Technologies by BorgWarner, so more changes are in store for the auto supplier.

As for the electronics segment, Cree Inc saw a decline of 119 places, primarily due to the divestiture of its lighting products division, along with the related portfolio of over 1,275 US granted patents, to Ideal Industries Inc.

Funai Electric, a Japanese electronics firm, has a strong history of US grants and applications, but has seen a precipitous drop in US grants in 2019, falling 99 spots. Part of this is due to the assignment of a printing-related portfolio to commercialisation entity Slingshot Printing LLC. Additionally, Funai has seen multiple patent expirations. These lapses may be calculated responses to market challenges that serve to stabilise their business by divesting unprofitable products and associated expenses. 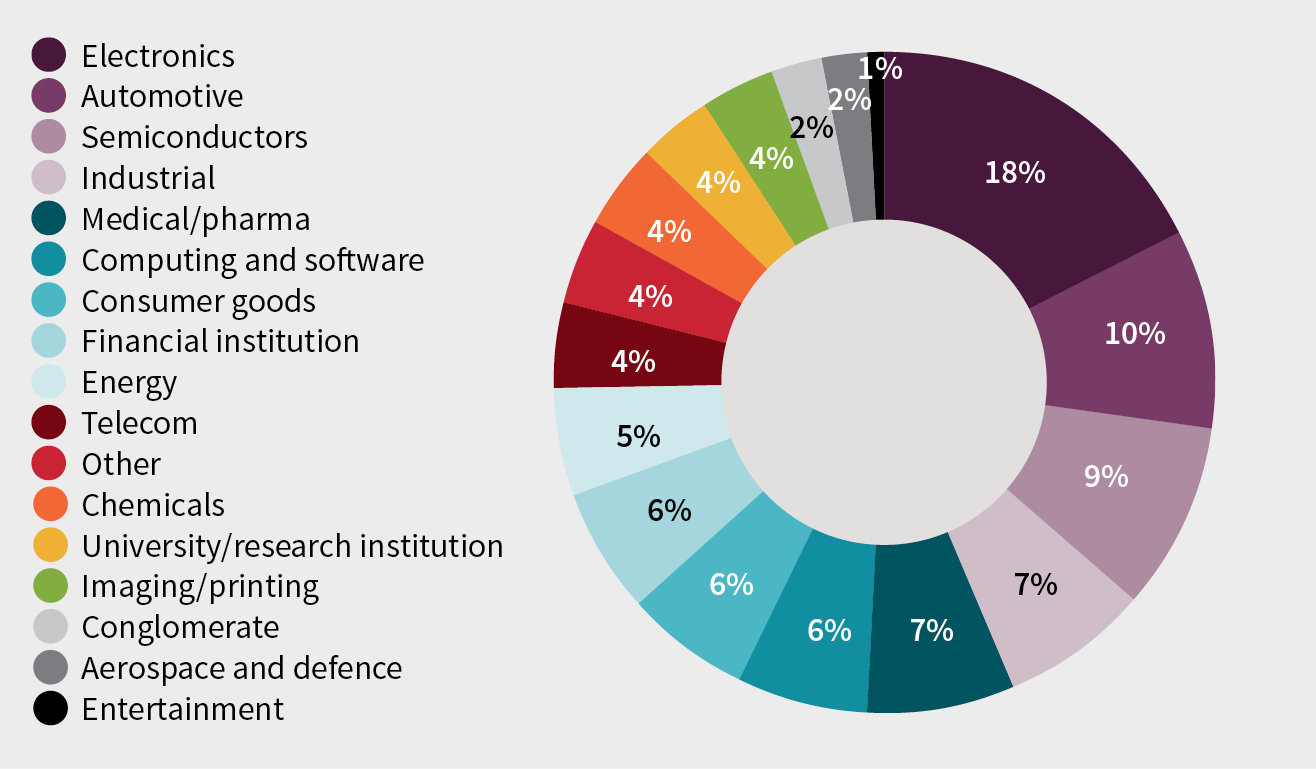 From the data, it is easy to see that patents and applications are both following a downward trend. Granted patents are arguably flat year on year, but the declines in applications are strong enough to suggest an upcoming fall in US grants. Even China, which in terms of patent filings has become the world’s IP juggernaut, has seen a drop in US applications. Chinese entities on our list saw a 14% year-on-year decline in applications.

The number of assets held provides only limited insights and supplemental analysis of the applications may explain how innovation is changing, perhaps manifesting in a different way. This year’s rankings point to a long-term shift among the world’s largest patent owners, where it is no longer the size of the portfolio that determines value but the applicability of that portfolio towards a defined business strategy.

At this point, it is difficult to analyse last year’s data without considering the potential impact of the covid-19 pandemic. We will be keeping an eye on how 2020 unfolds. While it may seem that patents will take a backseat to current events in the short term, there may be some comfort in the knowledge that innovation often sprouts from such times.