Between them, the 346 entities named in the IAM/ktMINE US Patent 1,000 Club hold close to 50% of all active US patents

The IAM/ktMINE US Patent 1,000 Club lists every entity with an active US patent portfolio of 1,000-plus rights. The list of 346 entities encompasses a huge share of US patented technologies, controlling over 1.6 million assets. This accounts for nearly half of all granted, in-force US patents on the market today.

As patent transaction activity continues to grow and M&A activity heats up among the top innovators, it is likely that this list will change dramatically year over year. Keeping up filing rates is essential to maintaining a position on the list. Well-established entities with a long history of innovation will need to invest more resources to maintain their filing rates as their portfolios age, while younger companies will need to focus their attention on R&D into new technologies.

As US entities take up 168 positions on our list, it is unsurprising to see that US corporations represent the majority of countries represented in the IAM/ktMINE US Patent 1,000 Club, but patent activity is growing in Asia as well. More than 30% of the top filers are headquartered there, with almost 70% of these coming from Japan.

For the entire list, about 50% of the entities represented are based outside the United States. These companies own 928,328 granted patent assets or about 57% of granted US patents. European entities make up about 18% of this list, controlling more than 214,000 granted assets.

Sabic Global Technologies is the sole entity with more than 1,000 US assets from the Middle East. There are no entities representing South America, Africa or Oceania.

On the IAM/ktMINE Patent 100 we saw a greater density of technologies within the computing, software and semiconductors area, while more traditional industries – such as big pharma, industrial equipment and consumer goods – were scarce.

The extension of our results in the IAM/ktMINE US Patent 1,000 Club represent a more diversified grouping of industries. Electronics and semiconductors still lead the pack but the automotive sector represents about 9.5% of the list, followed by industrial equipment at almost 8% and medical/pharmaceuticals at just over 6.5%.

At the low end, about 4% of the entities represented are universities or other non-profit research institutions, 2% are aerospace and defence, and about 1% are entertainment or broadcast. 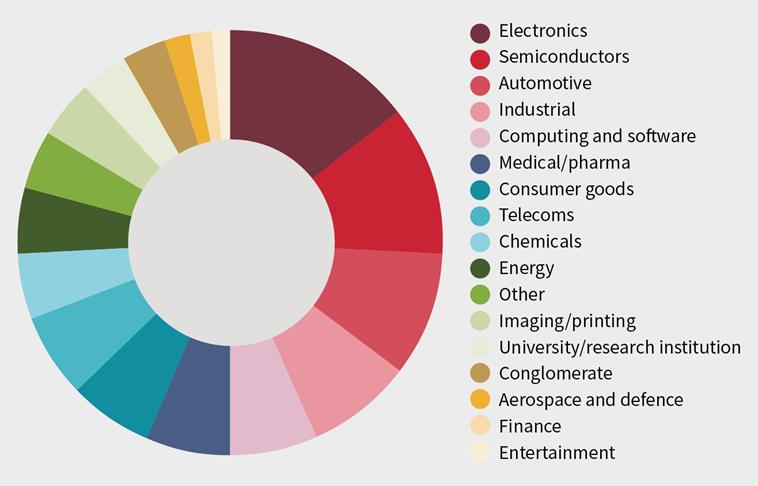 Interestingly, four Chinese companies – BOE Technology, Xiaomi, Huawei and ZTE – are in the top 10 patent portfolios with the highest ratio of patent applications to granted patents. As only five Chinese entities made it into our list of top patent filers, we can expect these entities to climb even higher up the rankings over the coming years.

Other notable companies with increased application activity are eBay, Facebook, L’Oréal, Nestlé and Salesforce. eBay’s patent application growth could be bolstered by the consumer’s need for more secured transaction processes, while Facebook’s increased patent activity may indicate that its corporate strategy for innovation is to develop organic, in-house technology, as opposed to other companies that have relied on M&A to stay competitive.

Of the entities with the top 10 highest ratios of patent applications to granted patents, the average ratio is about 67% apps-to-grants.

The IAM/ktMINE Patent 1,000 Club analysis also features the ratio of patent application publication activity from 2017 and compares that to each entity’s overall application portfolio. Standout entities with a large publication volume from 2017 are highlighted by higher ratios.

When comparing entities with more than 50% of their pending applications published in 2017, it becomes apparent that 16 out of 32 entities are filing from Asia. From that same group, US entities such as Dolby Labs, Skyworks Solutions, Net App, Lockheed Martin and John Deere & Co stand out as portfolios to watch. The average publication activity for 2017 was about 35% of the entire patent application portfolio.

To create the IAM/ktMINE US Patent 1,000 Club list, ktMINE analysed patent publications to determine granted and pending patent applications in good standing. Granted patent data includes utility patents along with design and plant patents. Patents and applications that have expired, been abandoned or have been otherwise unmaintained are excluded from this dataset. The data pulled for this publication is current as of January 1 2018.

ktMINE technology aggregates each granted patent and application to its corresponding corporate tree in order to create the most up-to-date and complete portfolio. Each entity is designated by the location of its corporate headquarters for supplementary analysis. In addition, we include a ratio of patent application activity to consider the rate of an entity’s innovation. These are based upon each entity’s patent publication activity in 2017 relative to its overall portfolio of pending patent applications.

The data underpinning the listing was collected and aggregated from ktMINE through its IP data and analytics platform. It was gathered from sources such as the US Securities and Exchange Commission (SEC), the US Patent and Trademark Office, the European Patent Office (EPO), the World Intellectual Property Organisation, the System for Electronic Document Analysis and Retrieval, the Public Access to Court Electronic Records, other regulatory bodies, and hundreds of news sources. ktMINE then linked these datasets to form the most comprehensive repository of IP data available.