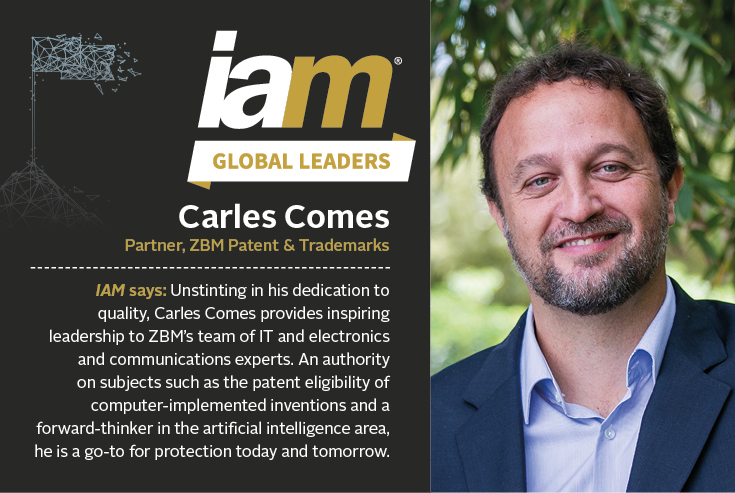 How did you first get involved in intellectual property?

In 1994 Spain had no patent tradition, no training offers and almost zero awareness about patents in industry or engineering schools – I landed in the IP world by pure chance when I was still a student.

I had only a faint idea of what a patent was and I never anticipated the degree of complexity that can be involved in patent law, but I immediately fell in love with a job that allows you to deal with diverse high-tech fields, apply your knowledge and learn more every day. You always work at the forefront of technology, and every case is a beautiful intellectual challenge.

What practical differences have the 2017 changes to Spain’s patent law made?

The main change as far as Spanish prosecution is concerned is that all national patent applications now undergo substantive examination, which has made the system less attractive to some applicants.

Small companies, research institutions and entrepreneurs which used to file a national application first, and extend the application abroad only if they raised money during the priority year, now find that the cost difference between a Spanish and a European application is lower than it was. Simultaneously, the EPO search report is more useful if you are looking for a partner.

Some of our clients now file utility models as first filings, as a cost-effective and fast way of obtaining at least some protection (ie, 10 years).

Spain currently shows no signs of becoming part of the proposed unitary patent system, is this likely to change?

While Spain shows no serious intention of joining the system, I do not see the country remaining indefinitely and voluntarily isolated from its European partners in this aspect.

The average Spanish company may not have the same innovative momentum compared with some foreign ones, but as the most dynamic among them shift their core activity from production to innovation they may become more interested in the unitary patent and the UPC and put pressure on the government and the political parties to effect change.

The level of interest in the system will also depend on how it works, if and when all of the obstacles are overcome and the unitary patent and the UPC enter into force.

Patent interest is related to technological interest: the fusion of technologies from the physical, digital and biological spheres (ie, the fourth industrial revolution, according to the World Economic Forum) is changing our lives and creating many patent applications. We have seen inventions that merge remote technologies, including the Internet of Things, communications and connectivity, nanotechnology, robotics, virtual reality, biotechnology, autonomous vehicles, blockchain, 3D printing and medical devices. Mobility and smart cities are trendy, while the development of clean energies is already a necessity and not just a possibility to explore.

AI is here to stay, and it goes without saying that there is now both a lot of interest and serious challenges to face with regard to the patent system. For example, a machine has already been named as an inventor in recent patent applications, which indicates that changes are on the way.

If you were to make one prediction about how the Spanish and European patent systems were to develop over the next five years, what would it be?

As Spanish industry looks less towards its internal market and more towards Europe and the rest of the world, the European system may become increasingly more attractive even to small companies.

The evolution of the European system may depend in part on whether the unitary patent and the UPC enter into force, and on the first cases held at the UPC. The unitary patent and its validation system will be a welcome solution for many applicants; but how litigation at the UPC will develop is still unclear, and many applicants are concerned about the risk of losing a patent or an infringement case across all EU countries in one single lawsuit.

Depending on the practical difficulties and costs of litigating at the UPC there are different strategies that may affect the EPO’s work and filing figures; applicants may decide to file more national patents instead of European patents, to remove them from the UPC’s jurisdiction or, on the contrary, they may file several European patents with differing scope in the same family, to stand more chance that one of them will be valid and infringed by competitors.

Carles Comes has been a partner at ZBM Patents since 2005. He is an electronic engineer with experience both in IT and patent law, where his practice is strongly focused on electronics, telecoms and computer-implemented inventions. Mr Comes has experience in European and worldwide prosecution and also in litigation and customs interventions for SEPs. He has advised national and international clients in fields including medical devices, audio, AI and virtual reality.