Biotech patenting by domestic applicants – do we need a Brazilian depository authority? 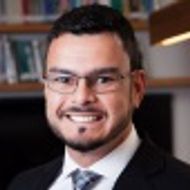 Humans have been using microorganisms for millennia. With ever-faster technological progress, biotech has arisen as an important multidisciplinary science that integrates concepts of biology, chemistry, engineering and informatics, based on the use of living organisms (or parts thereof) for the production and/or improvement of goods and services.

Biotech can help to overcome some of the challenges facing humanity today. It can be applied in a number of fields, including:

These developments require a massive investment of time, energy and resources. Patents are an important asset for biotech companies, which allow them to protect their expertise and maximise the chances of getting a return on investment.

The National Institute of Industrial Property (INPI) has released a new study, which assessed patent applications in the biotech sector filed by national applicants between 2010 and 2016. It aims to verify the demand for a Brazilian institution that serves as a depository for biological material under the Budapest Treaty on the International Recognition of the Deposit of Microorganisms for the Purposes of Patent Procedure.

How biotech patenting is different

Applicants seeking patent protection in all fields of technology are required to satisfy certain criteria with regard to local IP rules. Typically, the invention must satisfy three patentability requirements: novelty, inventive step and industrial applicability. Moreover, there is also the sufficient disclosure requirement, whereby applicants must describe how their invention works. In other words, the specification must be sufficiently detailed for a person skilled in the art to be able to reproduce the invention.

In specific cases of applications related to biological material, a written description is not enough to enable a skilled person to reproduce an invention for which patent protection is sought, due to the difficulty – or even impossibility in some cases – of properly disclosing such material. This has led many countries to require that when patenting microorganisms, specifications must be complemented by a sample of the biological material in question with a specialised culture collection.

This issue is regulated by Article 24 of the Brazilian Industrial Property Law, which reads as follows:

“Article 24 - The specification must describe the subject matter clearly and sufficiently so as to enable a person skilled in the art to carry it out and to indicate, when applicable, the best mode of execution.

Sole Paragraph - In the case of biological material essential for the practical execution of the subject matter of the application, which cannot be described in the form of this article and which has not been accessible to the public, the specification will be supplemented by a deposit of the material in an institution authorised by INPI or indicated in an international agreement.”

However, depositing multiple samples with each patent application in each country of interest would be impractical for patent offices, as well as hugely time consuming and costly for applicants.

The solution for this problem came into force on 19 August 1980 – the Budapest Treaty. Created to establish the criteria for filing microorganisms for patent purposes, it eliminates the need to deposit multiple samples of the same biological material with biological resource centres in different countries. All members of the treaty are obliged to recognise microorganisms deposited as a part of the patent disclosure procedure with an international depositary authority (IDA), irrespective of where the IDA is located.

There are currently 45 IDAs in operation around the world and biological material deposited with any of them is recognised by all treaty members – 80 signatories to date, in addition to the African Regional Intellectual Property Organisation, Eurasian Patent Organisation and the EPO. Brazil is not a signatory of the treaty.

A study published by the Brazilian Association of Graduate Programmes in Economics in 2017 estimated that there are between 271 and 338 bioscience companies and between 175 and 240 biotech companies in Brazil – among these, 60% are small companies (around 10 employees and operating for less than 10 years). These bioscience and biotech companies are divided into the following areas:

According to the Syndicate of the Pharmaceutical Products Industry in the State of Sao Paulo, the Brazilian biopharmaceutical and biotechnology market was worth about $18 billion in 2017.

Figure 1. Number of patent applications filed by biotech area from 2010 to 2016

Figure 2 shows the main Brazilian applicants in the same period, demonstrating that among the top 20 applicants, 14 of these are universities.

Figure 2. Number of patent applications from the top 20 Brazilian applicants in the biotech field from 2010 to 2016 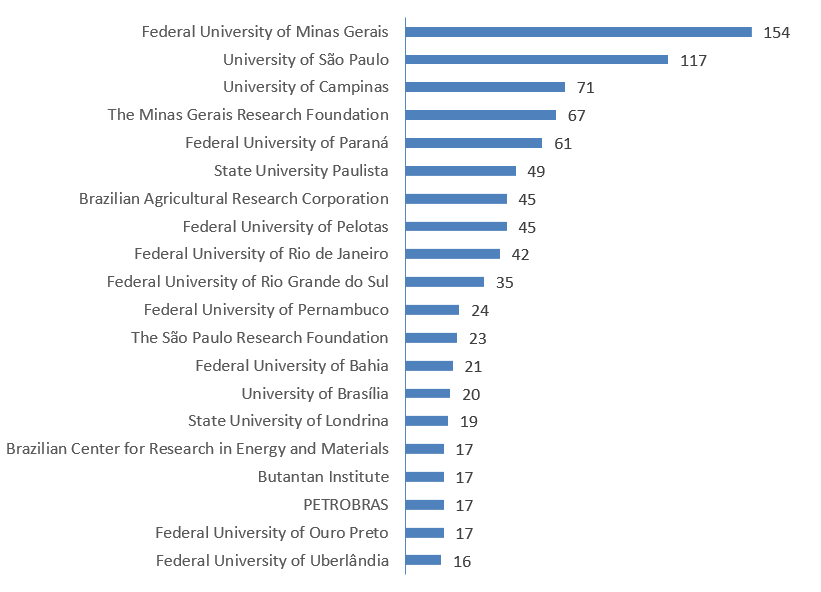 A qualitative analysis of these 1,583 applications demonstrated that only 2.15% thereof indicated a deposit of biological material in an IDA (most of them having been filed at the American Type Culture Collection and the German Collection of Microorganisms and Cell Cultures). Among these applications, 19 documents related to bacterial strains, eight to yeast strains, six to fungi strains, one to protozoal and one to cell line.

Based on the results of the study, the national demand for a Brazilian depository authority is still considered to be low – the construction and maintenance of a centre would therefore be unjustified. Nonetheless, even though demand is low, the difficulty of shipping samples abroad and the high cost of depositing in foreign institutions are relevant factors and may be a reason for the low take up of this system by national applicants.

These numbers also show that the main biotech players in Brazil are universities and scientific and technology institutes, while the Brazilian private biotech companies are still young and small.

Finally, the study concludes that a better option could be the accreditation of an already existing institution, which could act as an international depository authority, along with Brazil becoming a signatory of Budapest’s Treaty. This would facilitate the filing of Brazilian biotech-related patent applications in other territories and broaden the possibilities of expansion to external markets by Brazilian applicants.