Is your country ready for open innovation?

As technologies become increasingly complex, many companies rely on open innovation to bring products to market. Governments can take measures to encourage open innovation and improve their countries’ position on the world stage

In today’s knowledge economy, competitiveness is largely based on innovation. However, as innovation becomes increasingly complex – often, several different technologies are required to get just one product ready for market – companies that do not possess all of the necessary R&D skills themselves are being forced to rely on open innovation shared with public research organisations and other companies.

Several economic studies have discussed open innovation policies and how different approaches can affect a company’s performance. From these, four distinct types of open innovation culture have emerged, with companies tending to fit into one of the following categories:

This article transposes these categories to a country-wide level, asking whether different approaches to open innovation affect the performance of countries.

It is certainly the case that public policies and funding targeted at R&D can have a significant effect on a country’s innovation performance. But how can this be measured? ‘Innovation’ is generally defined as the successful exploitation of a new idea. For companies, this results in increased industrial activity, jobs, net benefit and turnover. The latter two factors have been taken as a measurement of a company’s open innovation performance (average return on sales) (Ulrich Lichtenthaler, Martin Hoegl and Miriam Muethel, “Is your company ready for open innovation”, MIT Sloan Management Review, Fall 2011, VOL 53, N 1; Reprint number 53109). Successful exploitation for a country should result in an increase in manufacturing added value for gross domestic product (GDP) for technology fields that have been supported by public funding and policies. Moreover, in a globalised world where the number of trade exchanges has exploded since 2000 (according to World Bank statistics, from $8 trillion in 2002 to $18 trillion in 2008), high-tech products resulting from this innovation are sold worldwide, which can positively affect a country’s global trade balance. In other words, a country’s global trade balance is a key indicator of the soundness of its public policies and the targeting of funding designed to support R&D and innovation.

Open innovation is based on technology transfer, which relies on two types of IP licensing: in-licensing and out-licensing.

We therefore propose defining the type of open innovation approach at country level based on a country’s global inflow and outflow of IP rights, and analysing whether the four categories listed above are relevant to countries – in particular, with regard to the performance of innovation, as measured by a country’s global trade balance.

The study focuses principally on eight countries, all of which are world leaders in terms of innovation, GDP and patent filing: South Korea, Canada, China, Germany, Japan, the United Kingdom, France and the United States. Other countries – Austria and Singapore – are also discussed.

IP rights inflow and outflow are listed for those countries in Table 1. IP rights leak compared to GDP for nine countries is then illustrated in Figure 1

They tend to have a net IP rights absorption (negative IP rights leak) greater than 10x 10-4. 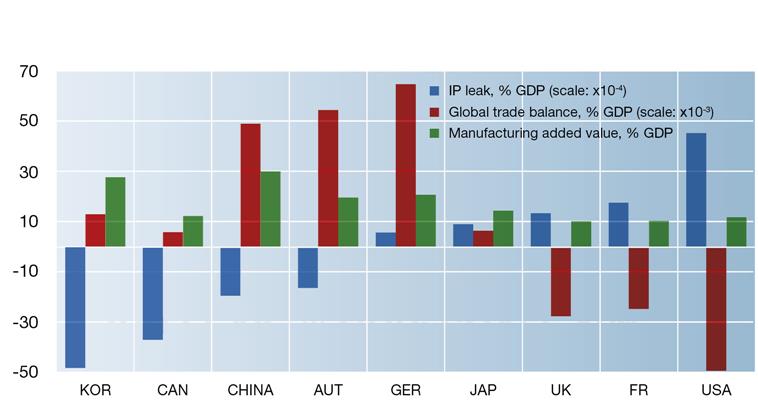 Countries with a high IP rights inflow (compared to GDP) and IP rights outflow are defined as ‘technology fountains’. Examples include the United Kingdom, the United States and France. These countries actively transfer part of their internal own technology, but absorb little external technology – in effect, transferring the IP crown jewels out of the country.

Such countries tend to have an IP rights leak greater than 10x 10-4.

Table 1. IP rights inflows and outflows compared to GDP, in US dollars

Impact on manufacturing added value and percentage of GDP

Technology broker countries implement public innovation policies resulting in strong inbound and outbound innovation. Globally, these countries keep a major part of the industrial value chain (the part with the greatest added value) internal when they outsource. This maximises the global cost-competition-innovation balance. Globally, they keep a high part of the manufacturing added value as a percentage of the national GDP (eg, in Germany this is 21% and in Austria it is 20%).

Technology isolationist countries do not benefit from outbound innovation coming from other countries and, as a result, have a low value for the ratio between global trade balance and percentage of GDP (eg, Japan).

Technology fountain countries (eg, France, the United Kingdom and the United States) massively diffuse their IP rights to other countries, outsourcing a large amount of manufacturing and jobs. They then buy in the resulting products, leaving them with a huge negative global trade balance. These countries fail to keep a sufficient part of the industrial value chain internal, which also leads to a massive fall in the percentage of GDP made up of manufacturing added value (see Table 3: manufacturing added value and percentage of GDP for three technology fountain countries).

French IP rights leak and global trade balance are mapped against one another in order to analyse these two data streams during the period between 1995 and 2010 (see Figure 4).

Since 2003, France has become a technology fountain country, with a high IP rights leak since 2005 resulting in a huge negative trade balance.

Globally, $1 billion of IP rights leak in France has resulted in €10 billion of negative trade balance.

The same analysis was carried out for another technology fountain country – the United Kingdom (see Figure 5). The conclusion is just the same as it was for France: $1 billion of IP rights leak has resulted in €10 billion of negative trade balance.

This rule is true for all technology fountain countries.

This illustrates that the global trade balance in China is about 20 times the rate of IP absorption.

Technology fountain countries tend to have had poor industrial policies for several decades. They generally believe that the fall of industry-added value in GDP can be compensated for by the increase of service-added value in GDP. However, as stated in many reports (eg, Philippe Aghion, Gilbert Cette, Élie Cohen and Mathilde Lemoine, 2011, “Crise et croissance: une stratégie pour la France”, Conseil d’Analyse Economique), over 80% of the global worldwide trade exchanges are product exchanges – service exchanges account for less than 20%. So a positive service trade balance cannot compensate for a large negative product trade balance.

These countries also hoped that a positive IP rights trade balance (an IP rights leak) would result in a positive financial inflow. However, they failed to understand that intellectual property is not a current product. As this article illustrates, IP rights outflow results in the creation of jobs in other countries and thus a large negative global trade balance.

Technology fountain countries have also failed to understand that the global economic return for countries that exploit their intellectual property domestically (eg, through taxes paid by companies, taxes on profits, local taxes, social contributions paid by the employers and taxes paid by employees, social contributions paid by employees, income tax and value added tax (VAT)) is over 10 times greater than the return for countries from royalties.

For example, the Association of University Technology Managers’ 1999 licensing report concentrates on the economic impact of exploiting the results of US public research organisations (PROs) in the United States. The report indicates that the return for PROs is 2% of the industrial turnover of the US companies exploiting the PRO results (ie, royalties earned in licensing), as global taxes paid by the industrial companies to the country and the local US states are 14% of turnover (ie, taxes on profits, local taxes and social contributions paid by the employer). However, the report suggests that this factor of seven is extremely conservative, because it does not include social contributions and income tax paid by employees, VAT that employees pay when buying goods in the United States and all other types of tax. Globally, the ratio between taxes and royalties is certainly greater than 10.

These technology fountain countries also have strong public debts and – as stated in the Conseil d’Analyse Economique’s report – the conjunction of a high public state debt and a high negative trade balance could lead these countries to insolvency. It is therefore vital that these countries change their global innovation policies.

Moreover, Report 3805 by Gilles Carrez, issued by the Assemblée nationale; Economie-commerce extérieur on October 12 2011, estimates that the average contribution made by France’s annual trade balance to GDP growth over the last 10 years was 0.5%.

By contrast, technology broker country Germany had the following results:

This confirms that GDP growth must be mainly driven by innovation resulting in positive (or close to zero, with investment also playing a role) trade balances, and not by artificial internal demand.

In Revitalizing America’s Entrepreneurial Leadership, Henry R Nothhaft and David Kline state that IP rights leak for the United States is 20%. They regret that intellectual property is used principally for monetisation rather than for industrial jobs and activity creation, and hope that in the future intellectual property will be used again for innovation, industry development and job creation. Some important recent developments in the United States show that the country is trying to change its global innovation policy (the America Invents Act, 2011, the America Jobs Act, 2011 and the US Supreme Court’s 2010 ruling in Bilski v Kappos (Case 08-964)). The first results of home job creation and industry reshoring can already be observed and it seems that the United States will in future abandon the technology fountain model and once more become a technology broker country. France and the United Kingdom would do well to follow suit.

Globally, there is an excellent fit between the categories defined for companies and the analysis developed in this article for countries. Countries would do well to pay attention to this analysis when defining their global innovation policies.

The analysis offered in this article suggests the following conclusions: