New analysis reveals that life sciences practitioners have adapted to the changes brought about by the US Supreme Court’s landmark decision. However, a more complex prosecution process now presents a challenge for smaller businesses

The US Supreme Court’s 2012 decision in Mayo Collaborative Services v Prometheus Laboratories Inc sent shockwaves through the IP world, with life sciences innovators – particularly those developing diagnostic methods – the most directly affected. This precedent for patent eligibility, which was followed by Alice Corp v CLS Bank International’s on business methods and software, makes it considerably more difficult to protect diagnostic methods – or at least this has been the widespread belief of practitioners, who have reported sky-high rejection and invalidation rates. However, the reality is that grants for diagnostic method patents have not actually dropped significantly; at worst they have merely stagnated.

Khyle Eaton, product manager of business intelligence at Anaqua, has used the AcclaimIP database to analyse patents relating to medical diagnostics. He conducted two searches: one for ‘medical diagnostics’ and one for the related cooperative patent classification (CPC) codes. Both results support the same conclusion. “While there may be a perception that US innovation owners are receiving fewer patents in the space, the data seems to suggest otherwise,” says Eaton. “Filings and grants, if anything, have increased slightly since 2013, compared to five years prior.”

Figure 1 shows the results for the terms ‘medical’ and ‘diagnostic’, and variations thereof, within two terms of each other in the full text of patents. Breaking down the findings into just the title, abstract and claims gave very similar results.

“According to the information I am aware of and in my personal practice experience, the category of medical diagnostics that covers devices, systems and apparatuses has been growing since 2012 in both filings and grants,” confirms David Rosenbaum, founder and chair of Illinois-based law firm Rosenbaum IP. “It is more difficult to discriminate a trend for the other category, diagnostic methods which are not device, system or apparatus specific.” He admits that initially there was a decline in grants and filings but that since Mayo the patent community has learned how to work within the confines of the Supreme Court’s ruling and the examination guidelines. “I have seen the filing and grants for diagnostic methods increasing over the past three to four years,” Rosenbaum adds. “However, I believe that while there has been fluctuation in patent filings and grants since 2012, the overall trend bias since 2012 is somewhat downward.”

The numbers suggest that patent grants within medical diagnostics have not been as affected by Mayo as some might have feared – it would seem that many practitioners are adapting to the changes. Nevertheless, there appears to be an emerging dislocation in the global market. One major concern is that rights holders receive different degrees of protection depending on the jurisdiction in which they have chosen to file, as other major markets have largely split from the United States on patent eligibility.

The EPO has reaffirmed on multiple occasions that diagnostic methods are indeed patent-eligible subject matter, while the German Federal Supreme Court ruled that it would not follow the US Supreme Court’s Mayo decision. Australia also confirmed the patentability of diagnostic methods in Ariosa Diagnostics v Sequenom this summer, finding the latter’s patent for pre-natal testing to be valid. The United States is thus an outlier with its interpretation of Section 101, which means that it may become increasingly easier to obtain diagnostic method patents elsewhere in the world.

Another critical concern for rights holders is whether their granted patents will hold up in court. The USPTO’s patent-eligible subject matter guidelines have been generally well received, although it remains to be seen whether patents granted under these will make it past the Court of Appeals for the Federal Circuit.

“In my opinion, the USPTO’s guidelines are unlikely to survive Federal Circuit review in its entirety,” says Jeffrey J Ellison, partner at Boston-based law firm Clark+Elbing LLP. “Changes to the USPTO patent eligibility guidance are an ongoing effort to harmonise office practice with the evolving appellate case law.” He highlights an update to guidance governing inventions directed to personalised therapies to reflect the Federal Circuit’s holding in Vanda Pharm Inc v West-Ward Pharm Int’l Ltd as evidence of how the USPTO adapts to new rulings. “When considering USPTO guidelines, the Federal Circuit has stated ‘[w]hile we greatly respect the USPTO’s expertise on all matters relating to patentability, including patent eligibility, we are not bound by its guidance’.”

In that case, Cleveland Clinic v True Health Diagnostics, LLC, a 3-0 majority confirmed a lower court ruling that Cleveland Clinic’s patent relating to a diagnostic test for heart disease was ineligible under Section 101. This was a blow to the USPTO as the patent owner attempted to raise earlier guidance in defence of its claims. “As long as the appellate courts continue to refine the legal framework for patent eligibility, the USPTO guidance is expected to change to accommodate those refinements,” says Ellison.

On the other hand, Rosenbaum insists that the guidelines are strong enough to survive Federal Circuit review as they are consistent with the Supreme Court’s decision in Mayo. “In my 36 years of experience I have found that there is always a tension between the Federal Circuit’s or the Supreme Court’s decision and the USPTO’s rulemaking,” affirms Rosenbaum. He highlights the fact that when it comes to USPTO policy making there is a thorough vetting process with both the legislative branch and the public, including interested IP owners and members of the bar. “While it appears to be a chicken and egg process, eligibility guidelines enacted by the USPTO when presented to the Federal Circuit have already undergone copious legislative and regulatory review to uphold the statutory requirement that the rulemaking ‘not be inconsistent with the law’ under 35 USC Sec 2(b)(2).” Rosenbaum acknowledges that this does not equate to a stamp of approval by the Federal Circuit, but that it is an ongoing process, which he thinks has been successful in this instance. “The USPTO guidance is always dynamic and responsive to the court’s decisions both on the guidance and on cases affecting the guidance. While it appears to lag behind the court decisions, it is really part of a larger process loop.”

Figure 3. Share of office actions, including a §101 subject matter rejection

Figure 4. Allowance rate versus applications disposed – A61 codes with the claim ‘diagnos*’

Figure 5. Months to allowance – A61 codes with the claim ‘diagnos*’ 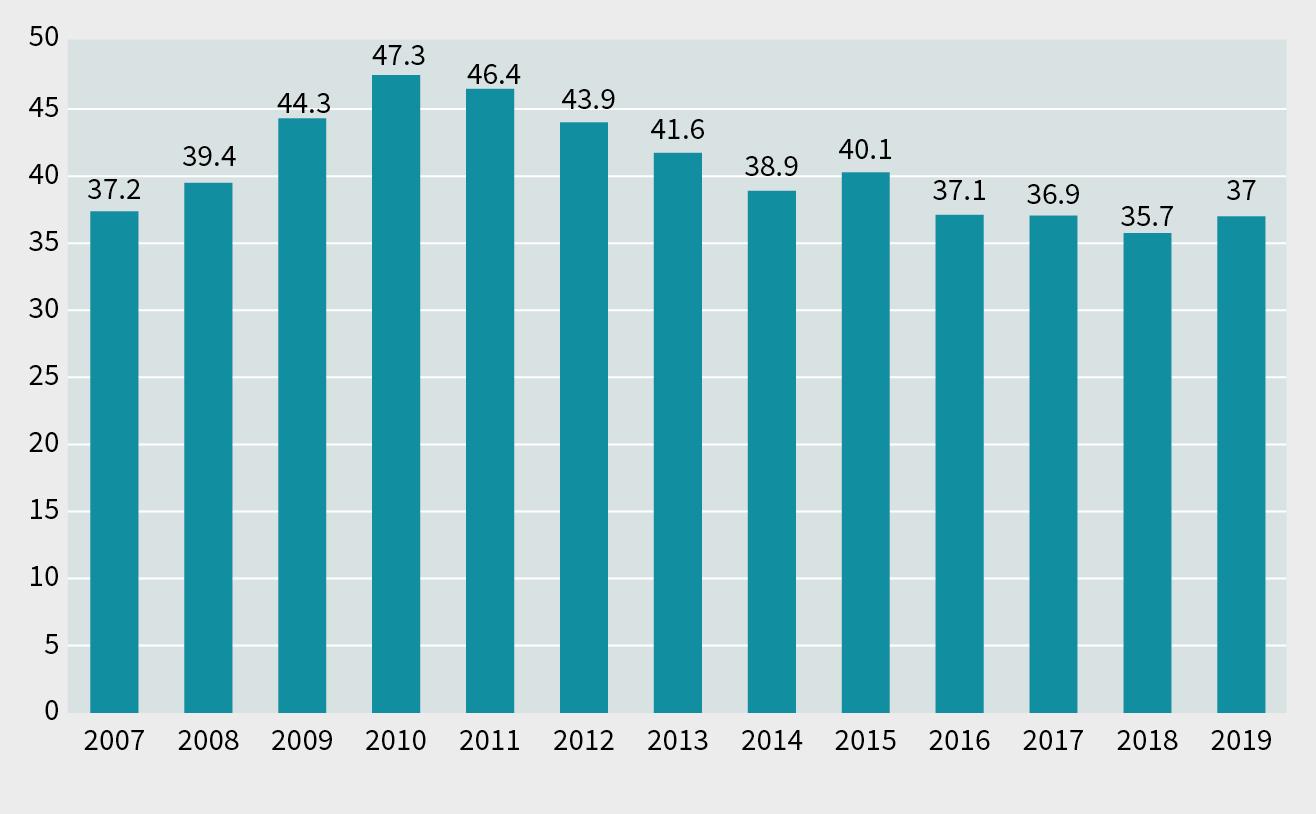 Figure 6. Responses per allowance – A61 codes with the claim ‘diagnos*’ 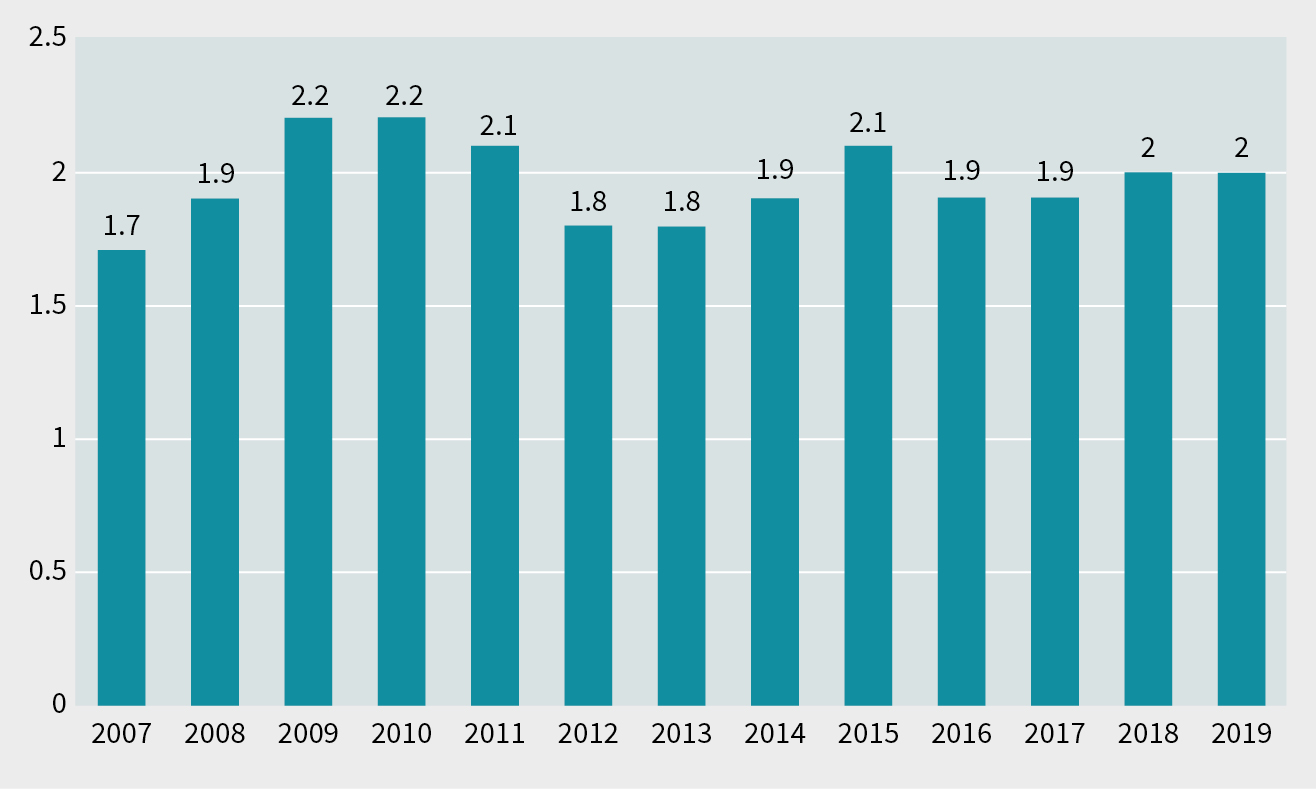 The impact on prosecution

Previous studies examining the effect of Mayo on diagnostic-related patents have shown that the confusion surrounding Section 101 has been highly damaging to small business owners.

In the paper “Decoding Patentable Subject Matter”, Colleen Chien and Jiun Ying Wu found that the Section 101 rejection rate for medical diagnostic applications grew from 7% to 32% in the month after Mayo and continued to climb to a high of 64% (see Figure 3). This study relied on data from the USPTO’s Office Action Database, meaning that the latest available data was from early 2017.

Granted applications needed more time and effort to overcome rejections. One or more RCEs had to be filed in 45.8% of the cases, whereas 30.3% required two or more – this is a high rate. The results showed an obvious effect on the prosecution process but concluded that the impact of Mayo had not been as devasting for biotech, diagnostics and personalised medicine patent applications as was first thought. A high number of applications were able to overcome rejections, often with amended claims. While it may take more time and money to get a patent allowed, a Mayo-based rejection is not necessarily a death sentence.

Further good news is that research conducted by BigPatentData founder Chad Gilles shows that there have been no significant changes to the prosecution process post-Mayo. He conducted two searches: one for CPC codes under A61 codes (see full list in Note 3) with the claim ‘diagnos*’ (see Figures 4 to 6) and one for patent applications citing C12Q 1/6883, C12Q 1/6886, C12Q 2600/106, G01N 33/569, G01N 33/571 and G01N 33/574 (see Note 2 for definitions of these codes). The latter CPC code set was selected as it was the same method of defining medical diagnostic inventions used by Chien and Ying Wu in their analysis.

Both sets of results showed a stagnation and drop-off in allowance rate, which recovered post-2016. There was a marked improvement in the time it took for patents using designated C12Q and G01N CPC codes. The responses per allowance did not change drastically in either search, although Figure 9 shows a decrease in the average responses in 2012.

Gilles acknowledges that there are a number of caveats to this analysis. The two most important are that it is difficult to tell whether all of these applications accurately reflect diagnostic methods applications, as the analysis was based on Boolean searches as well as CPC classifications and neither are an exact science – inevitably there were some false negatives as well as false positives included in the search. The other is that the statistics show nothing about the claims made before or after. Thus, applicants could have made amendments that helped allowance but ultimately weakened enforceability.

Notes on the data and classifications used

All patents in Anaqua’s AcclaimIP charts are by filed date. Granted sub-sets are those that were filed in that year and have been granted in any year.

A61B 1/00: falls under diagnosis; psycho-physical tests; instruments for performing medical examinations of the interior of cavities or tubes of the body by visual or photographical inspection (ie, endoscopes).

C12Q 2600/106: falls under oligonucleotides characterised by their use; pharmacogenomics, (ie, genetic variability in individual responses to drugs and drug metabolism). 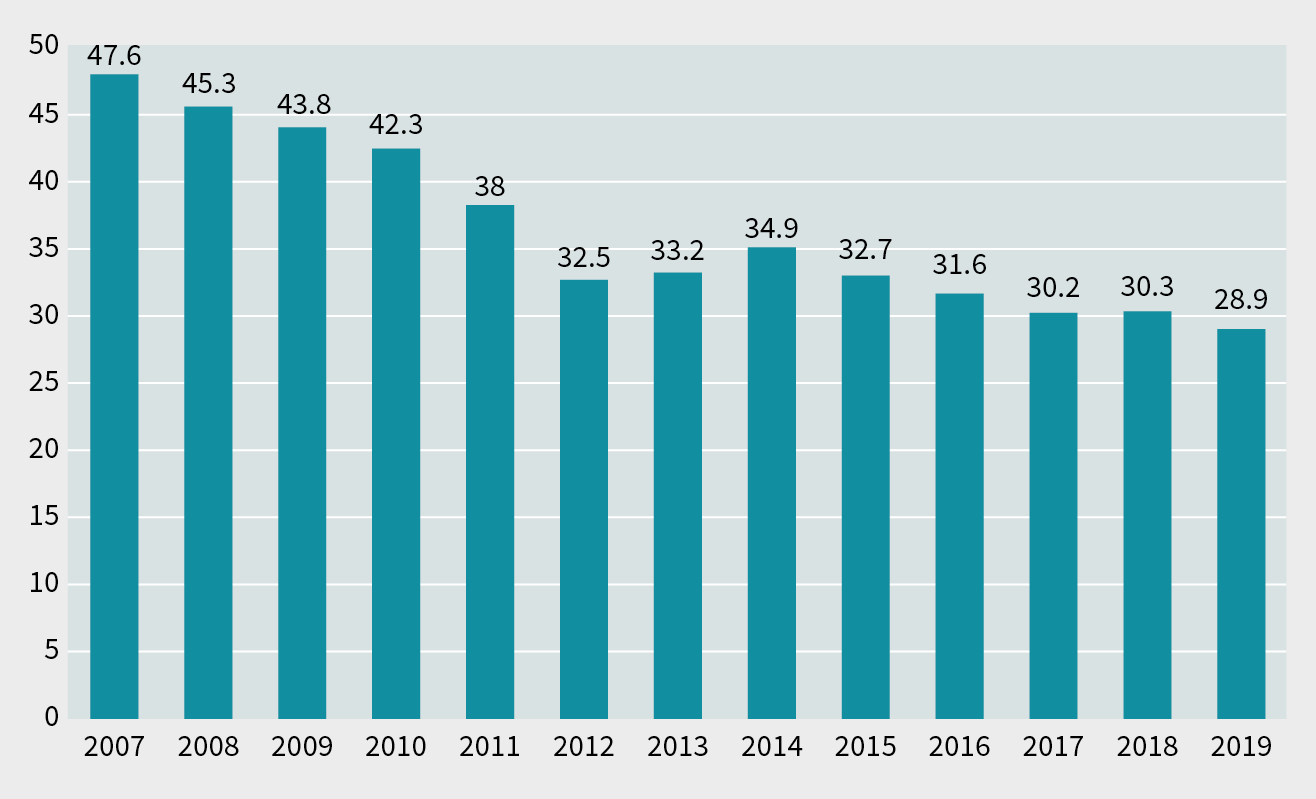 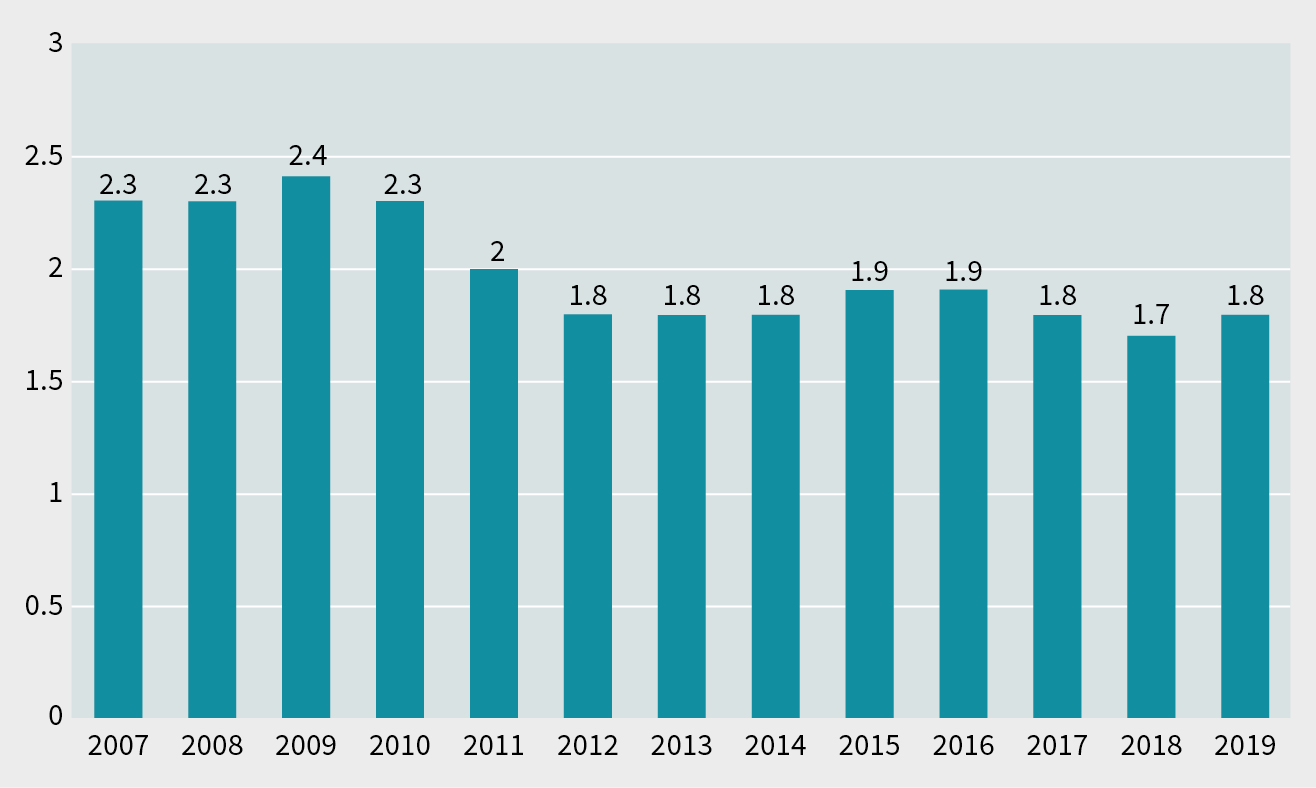 Patents relating to diagnostic methods are still being granted at a normal rate in the United States, despite concerns that the sector has been hit the hardest by Mayo. Innovators and practitioners alike may take some comfort from the fact that neither prosecution nor grant rates have been affected that heavily by the ruling; in many cases it looks as if applicants have been able to adapt to the new case law and guidance to continue to get patents granted.

None of this is to say that the current system – and the Section 101 precedent in particular – is a positive. Like many life sciences innovations, medical diagnostic discoveries are typically the result of millions of dollars of R&D investment and rely on strong patent rights to help generate a return and encourage innovation. That might be threatened if patents are unpicked by the Federal Circuit several years after being granted.

The concern remains that any uncertainty surrounding patent eligibility disincentivises the development of diagnostic method technologies. Without clarity the industry could suffer in the long term, which could have a devastating impact on a critical medical area.

While the perception is that Mayo and subsequent Section 101-related decisions have greatly harmed the prospects of obtaining patents relating to medical diagnostics, the data says otherwise. However, this does not mean that the patent-eligibility precedent is good for the patent system.