Why interpretation of technical terms in patent claims matters

The validity of Chinese patent ZL200780042463.2, entitled “heat curable resin composition for light reflection and the manufacturing process thereof, and the optical semiconductor element mounting substrate and optical semiconductor device using such resin composition”, was challenged before the China National Intellectual Property Administration (CNIPA), when the patentee attempted to enforce the patent at issue against an alleged infringer before the Beijing IP Court.

Claim 1 of the patent at issue protects a heat curable resin composition for light reflection, characterised in that:

the length of burrs generated during transfer molding at a molding temperature between 100 °C and 200 °C, under a molding pressure of no more than 20 MPa, and for a molding duration between 60 to 120 seconds, is no greater than 5 mm.

The interpretation of the length of burrs was the bone of contention in both the invalidity and civil infringement proceedings.

From the outset, the interpretation of claims originates from the court’s assessment of whether an alleged infringing technical solution falls into the scope of protection of a patent. However, the interpretation of claims is not unique to infringement disputes, as it is also necessary to interpret claims in patent prosecution procedures in order to ascertain the meaning and scope of the claims and their correlation with prior arts.

In principle, the judiciary often resort to description and appended drawings, relevant claims and the examination dossier of the patent at issue to interpret the claims. Where a terminology in the claims is specifically defined in the description, the definition shall prevail. Should the above means fail to elucidate the meaning of the claims, another option is to take into account known literature such as reference books, textbooks and the like, as well as the ordinary understanding by those skilled in the art.

The Guidelines further establish in Part II, Chapter 2, Section 3.2.2 the principle of how a claim should be understood:

The extent of protection of a claim shall be construed according to the meaning of the words used in the claim. Generally, the words used in a claim shall be understood as having the meaning that they normally have in the relevant art. In particular cases, where the description explicitly gives a certain word a special meaning and, by virtue of the definition to the word in the description, the extent of protection of the claim using the word is defined sufficiently clearly, such a case is also allowed.

Definition of the length of burrs in the patent description

Paragraph 0072 relates that, as used in the present invention, “burr length during molding” denotes the maximum length of resin-cured product that juts in the radial direction out of a centric cavity in a mold, through gaps at the joint between the upper dye and the lower dye of the mold, during the transfer molding process by using the mold for burr measurement, as illustrated in Figure 4. 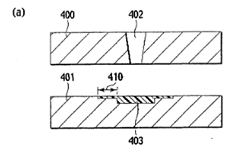 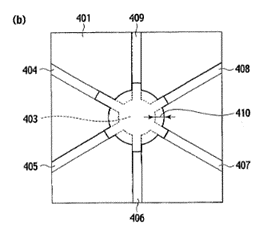 Inconsistency in the description

Based on the description, the length of burrs refers to the maximum length of resin composition that flows and is cured along the slits (ie, the six slits with different depths). However, that is not the case, as shown by the drawings. In Figure 5(b), the burrs are denoted as 410 and are marked between slits 407 and 408, rather than inside the slit. Figure 5(a) is also different from Figure 5(b): if the burrs refer to those denoted as 410 in Figure 5(b), which are between the slits, then they should be positioned above (rather than beneath) the upper surface of the lower dye in Figure 5(a). If the burrs refer to the cured portion inside the slits, considering all the slits are of certain depths and stretch to the outer edge of the lower dye, the lines denoting the depth of the slits should stretch to the outer edge of the lower dye instead of ending on the outer edge of 410. In a nutshell, Figure 5(a) is erroneous in either case.

Meaning of the length of burrs in prior art

Without universally acknowledged meaning in the art, the length of burrs is merely referred to in some Japanese patent literature.

The testing methodology of the length of burrs as defined by the description of the patent at issue is consistent with that mentioned in the prior arts, that is, testing the burrs inside the slits.

The second part of this article will examine the invalidity decision concerning the patent at issue.